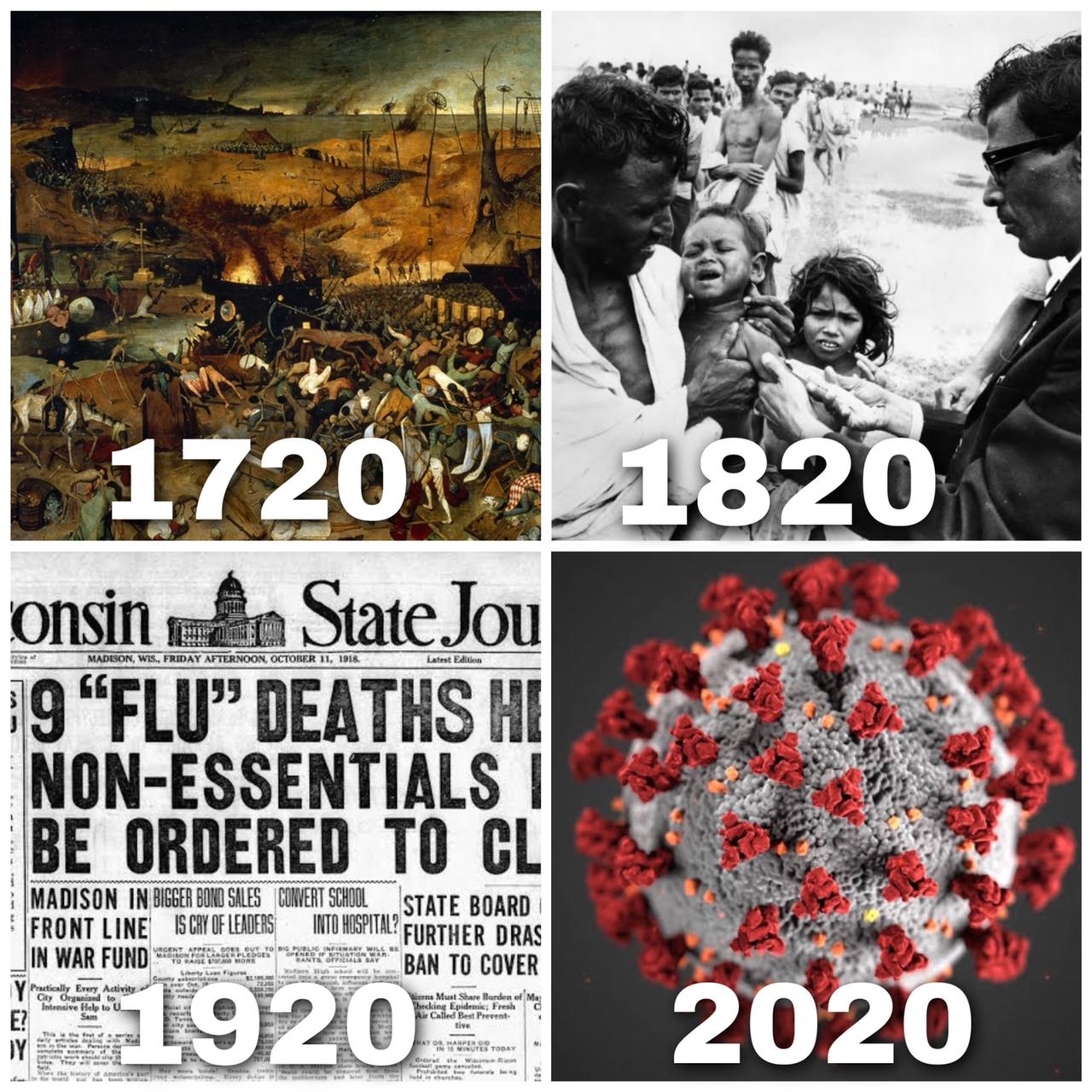 When the globe is fighting from the pandemic disease which has made every ability sagging there is a spate which can't be ignored by masses, a chronology of 100-year pandemic in a round of even count series. In the year 1720 plague, 1820 cholera outbreak, Spanish flu of 1920, and the most recent pandemic COVID-19 published in China, Wuhan. The precision with which these pandemics occur at exactly 100 years of age makes us think better about this topic to mankind of nation.

Sheathing all the pandemics together, a cardinal pandemic of 1720, The Great Plague of Marseille was the last major outbreak of bubonic plague which took place in western Europe during the early 1720s, the disease vanished a total of 100,000 mankind 50,000 in the city during the next two years and another 50,000 to the north in surrounding provinces and towns. The disease arrived on a merchant ship called the Grand Saint Antoine at the French port city of Marseille. Its carrier infected passengers from the Middle East and unloaded in cargo that contained rat fleas. The plague-carrying rat fleas soon spread across the city and started to develop a pandemic situation in France. Disease broke out in the city proliferate a big break in the city. Hospitals and medical centres were quickly shielded by victims of the pandemic. Mass graves were dug but were quickly filled. Eventually, the number of dead overcame city public health efforts, until thousands of corpses lay scattered and in piles around the city. Estimates indicate an overall death rate of between 25%-50% for the population in the larger area, with the city of Marseille at 40%, the area of Toulon at above 50%, and the area of Aix and Arles at 25%.

In 1820 one of the most unrelenting pandemics occurred, this pandemic began near the city of Calcutta (India) stemming from containment which initially spread through flies. The pandemic spread throughout Southeast Asia to the corner of the Middle East, Eastern Africa and the Mediterranean coast. The first cholera pandemic started similarly, as an outbreak that was suspected to have begun in 1817 in the town of Jessore. The spread of this pandemic was maximum spread by Kumbha Mela on the upper Ganga river. The spread dispersed as far as Bangkok and Manila, in the spring of 1821 it reached Java, Oman, and Anahi in China. In 1822, it was found in Japan, in the Persian Gulf, in Baghdad, in Syria, and the Transcaucasia and 1823 cholera reached Astrakhan, Zanzibar, and Mauritius. The total number of deaths from the epidemic remains unknown. The initial reported mortality rate was estimated to be 1.25 million per year, placing the death toll at around 8,750,000. The highest death rate was in Thailand, Indonesia and the Philippines.

The third anniversary of a pandemic was the Spanish flu, which made France the main epicentre. Lasting from January 1918 to December 1920, it infected 500 million people about a quarter of the world's population at the time. It was cardinal originated in hospitals and crowded camps which was an ideal site for the spreading of this respiratory virus. The death toll is estimated to have been anywhere from 17 million to 50 million, and possibly as high as 100 million, making it one of the deadliest pandemics in human history. Most influenza outbreaks disproportionately kill the very young and the very old, with a higher survival rate for those in between, but the Spanish flu pandemic resulted in a higher than expected mortality rate for young adults. The hospitals treated 100,000 soldiers of chemical attacks, and other casualties of war every day.

The 100 years outbreak was steady again this year in 2019 December when the primary cause of Coronavirus was hatched in Wuhan, China. The pandemic was given the name COVID 19 by the World Health organization that terminates every country in its hands. The theory of predictions by SF novel in 1981 was proved to be true on behalf of surviving nation. The disease was not transmitted by air or a communal virus, it is transmitted by being in contact with contaminated surfaces, through cough droplets that reach to organs of the body like face, mouth, nose and eyes. For example, if someone coughs on the buttons of the elevator, on a chair, or on a table, the person touches the surface with his hands and then touches the organs of the body with the same hand, then the person has maximum chances of getting infected. The estimated deaths due to this pandemic are extent with a rough count of 2.72Cr and victims of 16.8Cr, Not over yet with the adverse bad news, as Covid-19 reminds us that infectious diseases haven’t vanished.