UNIFORM CIVIL CODE:- What is it and How it became a politically contentious issue? 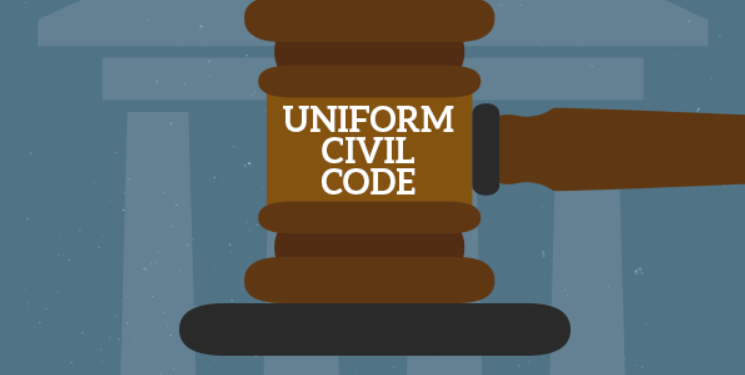 The electoral politics of the Bhartiya Janta Party (BJP) rested on a three-legged promise like the abrogation of Article 370, the construction of the Ram Mandir Temple, and the implementation of the Uniform Civil Code.After two years of their five-year term has passed, the question remains - Can and How will UCC be implemented? Is it the right step in the right direction? If implemented, what will be the reactions from different communities, and what will be its implications on the Indian political system in a long run. Before analyzing that, we should first look at the definition and historical background of the Uniform Civil Code.

The idea of UCC is enshrined in the Directive Principles of State Policy. These are the set of principles that are not legally enforceable but they are the basic guidelines and core values according to which the policies and laws are formulated. Article 44 of the Indian Constitution says " The State shall endeavor to secure for the citizens a Uniform Civil Code throughout the territory of India".

UCC refers to a common set of laws that aims to replace personal laws based on the scriptures and customs of various religious sects and communities such as marriage, divorce, inheritance, adoption, succession, etc.  It is a proposal to map out 'one law' for India that will apply to all religious communities.

In the present scenario, different laws are promulgated to regulate various aspects of followers of several religions. For Example:- Hindu Marriage Act, Hindu Succession Act, Indian Christian Marriages Act, Triple Talaq Act, Indian Divorce Act, Parsi Marriage and Divorce Act. The personal laws of the Muslim Community are not codified and based on their religious texts. The Shariat Application Act and Dissolution of Muslim Marriages Act are the laws that cover certain aspects of Islamic personal laws.

UCC aims to do away with these inconsistent personal laws and formulate a common, homogenous, and unitary law for the entire nation and its people.

The Father of the Indian Constitution, B.R Ambedkar was a big proponent of the Uniform Civil Code.  In the Constituent Assembly Debates, he believed that there was already a common civil code in the country except for areas of marriage, inheritance, etc. He espoused that the religious personal laws were conspicuously discriminating in nature and the vast jurisdiction given to them would promote inequality and injustice and would deter the lawmakers to bring social justice.

Despite receiving a plethora of criticisms and resistance, Ambedkar defended the UCC along with political stalwarts like K.M Munshi and Alladi Krishnaswamy. The opponents of UCC had said that it would bring disharmony and dissensions among religious groups as religious laws of different communities should not be altered or changed without their approval or consent.

Back and Forth of Political Parties

The Supreme Court in India had time and again, given directions to the governments to bring UCC as a law in the light of many cases of discrimination, injustices, atrocities, and violence meted out on men and especially women in the name of  "religious laws and customs".

The Centre had resolved to bring UCC to bolster its 'one nation-one law' strategy. Many sections of society including the Opposition had cast aspersions and deep reservations on UCC as forwarding the ruling party's majoritarian agenda of 'Hindutva politics'. They claimed that India is a heterogeneous society that includes people with their sensitivities and sensibilities. Therefore, a superimposition of binary and unitary law will defeat the idea of a diverse India and hurt the sentiments of minorities.

In an attack mode, the BJP had called out the Opposition's minority appeasement politics that has hindered the country's growth. The ruling government has often been criticized for promoting ultra-nationalism and jingoism to suppress legitimate criticism of their unsecular and capitalist ideologies. It is said to compromise the very basic idea of India and subvert India's democratic world image and turn it into an elected dictatorship.

The possible implementation of UCC can forge one of the biggest political debates in India. Taking an impetuous action wouldn't be the right solution. Inaction also has had disastrous ramifications. It is very crucial to discuss it in a broad format across various platforms so that there is a wide range of intellectual deliberations and dialogues to reach a consensus.