What Shapes our Beliefs? 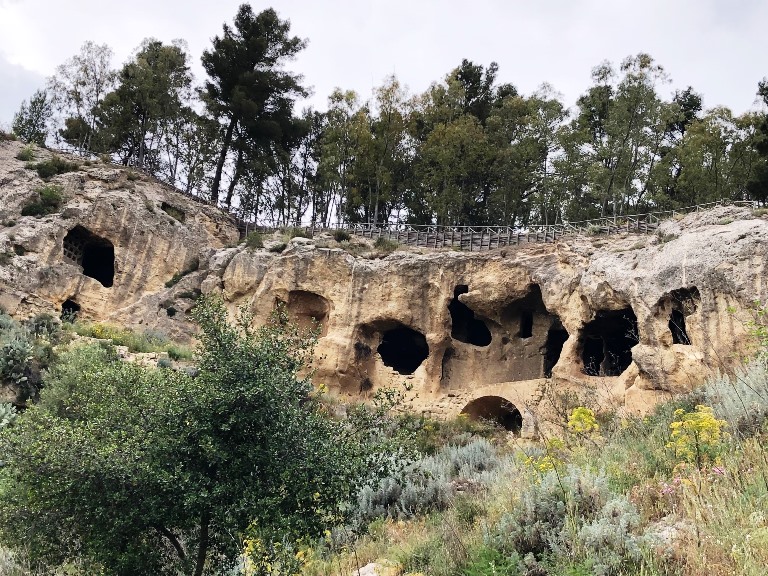 About 1500 years ago, the Byzantine monks and their Surfs arrived in an area characterized by caves carved by humans into the limestone rock that sweeps the slopes overlooking the Morello River in Vallone Canalotto, Sicily. The caves have been there for thousands of years, used by the Greeks, Romans, and prehistoric people between the Late Copper Age and Iron Age for burial chambers, religious rituals, and necropolises, the Greek word for ‘cities of the dead’.

This guide told us that the Byzantine monks were the first to adapt and use the caves for various crafts such as mummifying the dead, black smithery, and stalls for their livestock. He said they lived at the foot of the caves in wooden dwellings. He is a member of the Hisn-al-Giran society from the nearby village of Calasciabetta.

Hisn-al-Giran is an Arabic word meaning “fortress of the caves”. The society was founded by a group of university graduates, professionals, and students in 2011 to safeguard and maintain the Byzantine village. They recognized the caves were a crossroads of civilizations and of great historical and archaeological depth worth protecting. This group considered the place a beautiful natural heritage site where wild plants have medicinal, magical, and aromatic properties.

Why did the Byzantine monks travel so far to live here? Possibly their migration was the result of the last Greek-Gothic war won by the Eastern Roman emperor, Justinian I. The war gets described as a Pyrrhic victory, the losses greatly outweighing the territorial gain and the resulting impoverished post-war conditions leading to the breakout of the Justinian plague.

Recent researchers confirmed the Yersinia pestis strain of the plague was similar to that responsible for the Black Plague of 1347. The Justinian plague devastated areas around the Mediterranean base, the Arabian Peninsula, and Northern Europe. No wonder the Byzantine monks fled. They lived happily in the caves in Sicily until their demise in the 8th century by the then-dominant rulers, the Arabs. The Byzantine monks refused to be polytheists because they believed in One God and not many.

When we were in the church cave, our guide, Matthias, told us that no matter who used the ceremonial church cave, whether Greek, Roman, or Byzantine, they all practiced classicism. The wealthy conducted their cleansing rituals in one section of the cave, and the plebs got downscaled to the more inferior section. This puzzled me as a spiritual person because the God I know encourages us to treat everyone as equal The Biblical God created the human race as an interconnected body, where the eye cannot live without the ear, and the heart cannot exist without the head.

The love of the God I believe in encourages us to love one another as equals. The Byzantines also believed in a Christian God but they were discriminating. When I read in the Bible about what a Christian God says about love, He says it should be patient, kind, persevering, trusting, and not jealous, boastful, or proud. He asks for the kind of love that does not dishonor others and is not self-seeking. In fact, the God I read about in the Bible asks us to have a love that is not easily angered and keeps no record of wrongs. I wondered, “What happens between what is believed and how believers act?” Then I answered myself, “Ah, I know – the bridge between belief and action is the human”.

As we left the Byzantine village, we were passionately launched into more current history by Matthias, who I found to be a very astute thinker. He talked of the Sicilian reality during the Second World War. In the north, the Italians were supporting the Fascists, and in the south, in Sicily, they lived as if they were no war going on in their daily lives. That was until the allies arrived and bombed them and raped their woman. “The older people in Sicily today who experienced these atrocities from the Allies find it difficult to decide who to believe in even to this day, the Fascists or Allies”, commented Matthias.

My final internal question as we departed from the Byzantine village was “What shapes our beliefs?” In reflection, I thought our beliefs are colored by our families, the culture around us, the places we got educated in, and the governmental influences of the country we live in. I wondered what the beliefs were of the prehistoric inhabitants of the limestone caves.

As an Ecopsychologist my beliefs have been recently shaped by observing the social behavior of wild animals and indigenous people. They have shown me that living as small clans and communities means nurturing good relationships for survival. They live by the Godly belief; we are like one body, and we need each other.

It seems that in our world today our beliefs have instructed us to hand over our lives to governments and institutions. If governments succeed, we benefit from their resources, provision, and protection. However, when they make decisions that lead to an economic decline or go to war, our lives are tough. I wonder if the most recent war between Russia and Ukraine will result in more losses than gains as it did in the Greek-Gothic war that lead the Byzantine monks to migrate to Sicily?

If governments fail, we blame them for the circumstances of our lives, but we have to ask who put those governments in power? In conclusion, I’ll put forth two questions for you to think about: do beliefs based on religion or a relationship with God dictate our lives. Secondly, do our beliefs disempower and compromise our lives when we hand over personal responsibility to others to take care of us?