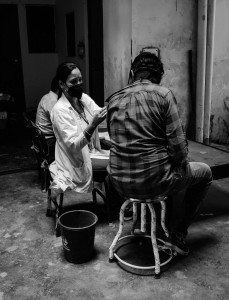 After months of keeping everyone in dark and devoid of the vaccine, the government of India recently announced a complete opposite vaccination policy scrapping the previous one. It is common knowledge that India's vaccination drive was pacing at a snail's pace with barely 3 percent of our population vaccinated.

It's pretty ironical that India which is known for being a Pharmaceutical giant and has successfully conducted mass vaccination programs against diseases like polio, itself falls short when it comes to the current covid-19 situation. An array of reasons come into play for such faltering inoculation rate.

To start with, there was the obvious vaccine hesitancy that gave us a slow head start or rather brought in a delay. Initially when the vaccines were made available to the 60+ old age group, it was natural for our senior citizens to doubt it's efficiency and take their time. After all, who would want to end up as an experimental pig?

What followed was the opening of other age groups like the one above 45 years and finally the 18+ age group, all that happening within a matter of months. In situations like this, where the previous group has not been dealt with and all of a sudden, millions of folks are made eligible for the vaccine shot, a massive surge in supply is bound to happen. And complementing that, is a tardy vaccine production from the 2 sole organizations that have made an oligopoly in India's vaccine industry.

The notion of 'Made in India' vaccines were on the top of the minds of our policymakers that they refused to mull over the inevitable repercussions and refused itself of the global tenders from international players. Not for a bit mulling over the fact that how will our 1.3 billion strong population get completely absorbed by two mere vaccines? Again the government placed the first order with vaccine manufacturers, just a few days before the launch of the vaccination drive on January 16. And the scanty batches of orders from them only resulted in an inconsistent supply of vaccines.

But the clear elephant in the room has to be the Vaccine Policy that government of India came up with. It proposed a decentralized form of vaccination roll out where the Centre had asked the states to procure 25% of the doses from the open market to vaccinate the 18-44 age group while taking the responsibility of the folks above that. Other than this, it provisioned 50% of the vaccines for itself while allotting the remaining 25% of them for the private hospitals and practitioners.

The crux of this proposition was the utter disparity in the prices of the vaccines bought by the three unit. while it was expected from the private sector to buy it at the high price and in turn, offer them to the public earning a marginal commission. But it was the state governments' allocated rated that befuddled us all. Unlike the United States which is a federal state, India is proud of its identity as one nation 'United we stand, and divided we fall' ideology. So if both the Centre and state governments are there to serve the same public then why such an inequity in the prices and supply?

These dreaded fears of ours turned out to be true when states struggled to cover their large eligible population with the scanty supply they received. This helplessness made them turn to the global vaccine players like Pfizer and Moderna. So basically, the Indian states were competing against one another in this race to acquire vaccines by any hook or crook. However, these organizations refused to deal with the states individually and asked to be reciprocated by the Union Government of India

It was amidst all this hodgepodge, that the Centre decided to take a complete U-turn from its failed vaccination policy. They instead announced that from June 21, every citizen above the age of 18 will be vaccinated free at vaccination centers run by the Centre or the state government

While the section of private sector was somewhat left untouched for it wasn't the burning issue that had the public on their toes. But they can charge Rs 150 as a service charge over the price of the vaccine. So basically apart from this aforementioned rate, these private centers are not supposed to charge a penny more than Rs 780 for the covishield vaccine and Rs 1145 for the covaxin. As for the upcoming Sputnik V, the price set is of Rs. 1145. With this, we hope to see the vaccine curve turn up for the good after all the bygone havoc.

Image by Swarnavo Chakrabarti on Unsplash