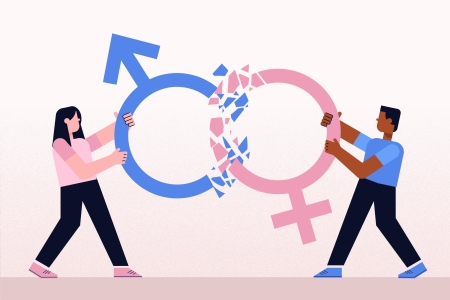 Gender stereotypes are an integral element of our society from the ancient ages. They are that deep-rooted in the foundations of our civilization that most people, usually with an ignorant eye are oblivious to its existence. But only those who get to bear its brunt can recite the horrors of gender roles in their households. Again, some might call ‘horrors’ is a mere exaggeration but that is the point I am trying to make that today, there are millions of women limited within the four walls of their house, a rolling pin in hand, their future foggy and worst of all, a dormant conscious.

Although the Universal Human Rights declare freedom and equity to all, but we still witness raging violence and discrimination on the ground of sexual orientation and gender identity. Worst aspect of this? There are absolutely no stats and data to back and highlight the gravity of the situation.

Rigid structures of patriarchy have paved way to the subordination of women at the expense of their exercise of power. No wonder, we witness frequent occurrences of sexual crimes against them as a means to keep their freedom in check. That’s the bluntest way to put the mindset of sadly, today’s majority of men into words.

This often ends up instilling this sense of “negativity intertwined with bias”. Certain feelings of animosity can foster within the victim towards the privileged individuals who get to savour the ups of this situation. Being a personal issue, this last line must have resonated with countless girls in societies with patriarchal backdrops.

Varying in magnitude and context ranging from an innocent ‘asking your daughter to bring water for the guests’ to later in life, asking her to give up on her career and instead devote her whatever left life to her husband. No matter how much we call ourselves feminists today, especially egalitarians after having witnessed global women equality movements like MeToo and TimesUp, truth be told that no amount of activism can overturn the events of all these years that had only solidified such gender norms. After all, we are a tiny screw in this elephantine machinery called society, doing our part.

These gender roles limit our capabilities as humans every now and then. Even though enough precedents have been set to put this mindset to shame, but as they say ‘old habits die hard’. Such perception has been etched in the minds of people as an accumulation of years growing up. And although, the thought of a gender neutral environment does seem pleasing but its attainment won’t be a cakewalk. Only, generations of cumulative effort can bring about a gradual end to these rigid gender stereotypes.