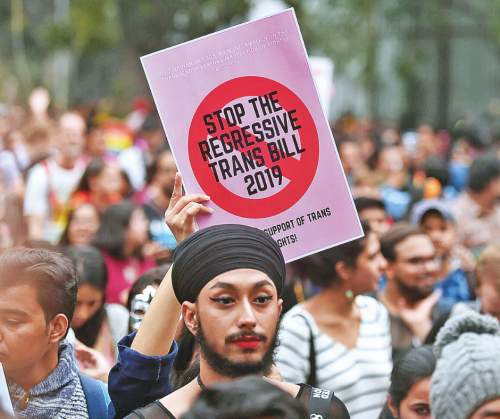 The Indian Transgender Persons(Protection of Rights) Bill, 2019 was presented in the lower house of the parliament on July 19, 2019, by Minister for Social Justice and Empowerment, Thaawarchand Gehlot. It was greeted with mixed reactions, where many people lauded the efforts of the government to take a step into social progress. At the same time, there were the other faction of people who questioned the actual document and the implications it meant for the Transgender community. According to the bill, a transgender person is someone whose gender is not the same as the one they were assigned at birth. It was introduced with the intention to prevent discrimination against people from the queer community due to their choice of gender. The buzz around the Bill is also due to the fact that it is far from the progressive SC judgement in 2014 in National Legal Services Authority vs Union of India (NALSA).

The bill protects the transgender community from being mistreated in the education, housing, employment and other services. Even though, the bill accepts the self-determination of identity by people, it mandates anyone who doesn’t fall under the binary genders to be recognised as a “Transgender” on the basis of a certificating stating the same by a district magistrate. The suggestion to include a committee by the 2016 Standing Committee in order to deliberate on the issue was rejected, but several leaders from opposition parties and activists in the LGBTQIA+ community raised concerns over certain portions of the bill.

People from the Transgender community vehemently boycotted the amendment, saying it's derogatory for them and infringes on their basic rights. Reshmi Baano, who is an activist for the rights of the LGBTQIA+ community in Mumbai, said, “The Amendment categorizes a transgender person as a person whose gender identity doesn’t match their birth gender identity. This includes Trans Men and Trans women, queer people, people from shunned communities such as Hijra and Kinner. The Bill mentions that the transgender person has intersex variations. Now this is deeply problematic because not every trans person can necessarily be categorized as “intersex” and neither every intersex person needs to be trans. Mixing up the two identities is almost synonymous to refusing their separate existence and the lack of acceptance for their independent identities not only showcase the stigma still prevalent in the society as well as inadequate knowledge about the community before framing laws affecting the community.

According to Chapter III of the Act, a transgender person would be provided with a certificate only if they undergo a surgery to change their gender to the gender they want to identify with. Such surgeries can often be expensive and traumatizing, but, no subsidies or provisions are made to provide them access to these surgeries or infrastructure to ensure smooth transition. According to NALSA, it was affirmed that the transgender people must have right to self-determination of identity without the mandate of a medical certification or sex-reassignment surgery. But, the current Bill might invade their rights, leading to medical scrutiny.

When in 2018, homosexuality was decriminalized I.e. section 377 was brought down, it was recognised that Transgender people often face physical and sexual abuse at the hands of law-enforcement agents. So a special provision criminalizes abuses at the hands of law-enforcers, and the section protecting them from sexual and other forms of offenses includes a punishment of a maximum two years with a penalty as opposed to the women’s rape death sentence or life-imprisonment. This difference seems unfair, reducing the value of the abuse that these people face. The Bill does deal with the protection of other civil rights that are essential to live a happy life as well.

Another person, who identifies as a queer person but wishes to remain anonymous, states, “The Bill is against everything we have been struggling for in the last few years. It is regression veiled in the form of progress. The transgender community is being stripped of so many basic human rights. People are even more fearful of revealing their identities now and coming out of the closet. The fact that the Bill did not have any representation from the community in question itself is evident enough to showcase how prejudiced the Bill is. I say this because I have seen my friends being rejected to be given a certificate as they don’t fit in the requirements for the male/female criteria, causing them trauma for years. It is based on stereotypes and assumptions, and no one from our community was approached. The Bill also mandates them to stay on hormones for a year in order to get certified or changing their name for identifying as a male/female.”

The time period or duration for allotting a certificate by the District Magistrate has not been explicitly defined, thus there is a lot of opportunity for them to abuse their power and exploit the community folks; denying them their basic rights. The actuation of the Act has also criminalized begging, leaving very limited space to earn for the community who have been oppressed for generations if not more. The Bill has not provided any additional reservation to them, thus it is arguably unfair to them.

According to the Act, a transgender minor person has been mandated to cohabit with their natal family, mentioning it as a “right to their residence”. However, even though the psyche behind adding such a subsection is to ensure that they have a roof over their heads, it can be problematic. Families and immediate society are often vehicles of oppression, as they can be non-accepting of their children’s gender identity choices. They often impart violence upon the transgender people, thus, instead of protecting them from violence, the Bill can prove to be a source of perpetuating violence on minors who are struggling with their identity and transgender persons who are below the age of 18.

However, many people rejoiced the little win after homosexuality was decriminalized in India. A significant portion of the community would now have grounds to protect their rights in education, healthcare, employment and housing sectors owing to the act. The Bill also states that the relevant government must take necessary actions and protocols to ensure the participation of Transgender people in the society. The Act has also recognised some offenses against the Transgender community as a criminal offense.

Despite the existing apprehensions in the society, the Bill was passed by the Rajya Sabha on November 26, 2019