Why is there Poverty in India still? 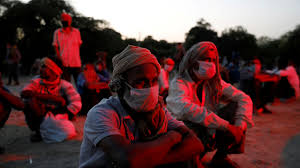 Even though India continues to add about five billionaires every month, nearly half of the country's population remains impoverished. Poverty is still one of the main problems we face daily in a developing country like ours, where we are growing and progressing towards becoming one of the world's most developed countries. On the one hand, while our country is making a name for itself and dealing with other international concerns, we must not overlook our internal problems.

Poverty has a variety of effects on people who live there. Illiteracy, poor nutrition and food, inadequate housing, child labor, unemployment, bad hygiene and lifestyle, and feminization of poverty are some of the repercussions of poverty. Furthermore, these poor individuals cannot afford a healthy and balanced diet, nice clothes, decent education, a stable and clean home, and so on, because all of these amenities cost money, and they have no help.

Poverty due to the pandemic

India was hit by the pandemic at a time when it was experiencing its slowest economic development in over a decade. The faltering economy had disproportionately affected rural areas, which house the majority of the country's consumers and destitute. Even in the absence of government data at the time, growth in rural poverty could be discerned. Because of Covid, more than 250 million individuals have been forced into poverty. They've lost their jobs, homes, and other assets, as well as their businesses. Unemployment was high, consumer spending was declining, and government development investment remained unchanged.

Millions of Indians have gotten impoverished, poorer, or on the verge of becoming poor, across all demographic and geographic groups.

This, however, is only a blip on the radar hopefully. Many people believe that when the economy improves, they will be able to rise out of poverty. People have learned their lesson in the two years since the virus began. They have cut back on spending and are trying to save as much as possible. Households have reacted by cutting back on their food intake, borrowing money, and selling assets. Government spending is proportional to the severity of the crisis too. Government aid has helped to alleviate the worst kinds of suffering, but the scope of support measures is limited, leaving some of the most vulnerable workers and households without assistance still.

One of the biggest causes of poverty in India is the country's high population growth rate. This results in a high rate of illiteracy, inadequate healthcare facilities, and a lack of financial resources. Furthermore, rapid population increase has an impact on per capita income, lowering it even further. India's population is predicted to surpass 1.5 billion people by 2026, making it the world's most populous country. However, India's economy is not rising at the same rate as the rest of the world. This indicates a labor scarcity. Nearly 20 million more jobs would be required to support this population. If such a large number of jobs are not produced, the number of poor people will continue to rise.

Another reason for Poverty is the ever-increasing prices of even necessities. One more reason is the caste system and unequal distribution of money and resources. The rate of Poverty in India is also rising as the country's urban population grows. The majority of these folks find a low-paying job or engage in an activity that just pays for their food. Most critically, about crores of urban residents live in Poverty, with much more living on the edge of Poverty.

To add to it, a large number of people live in slums or low-lying locations. These people are generally uneducated, and despite their efforts, their situation remains unchanged, with no good outcome. Furthermore, other factors attribute to being the primary source of Poverty in India. Poor agriculture, the widening divide between rich and poor, old customs, illiteracy, unemployment, and a few more factors are among them. A vast number of people work in agriculture, yet the activity pays extremely little in contrast to the labor done by employees.

Due to this, the rich get richer while the poor get poorer, creating an economic divide that is getting difficult to close.

What role does Corruption play?

According to popular conception, a country like India is linked to corruption and poverty. Corruption has been a persistent stumbling block for those of us who are working to bring about the political, economic, and social changes that are necessary for our growth. Corruption has been a cause and consequence of poverty across the country, and it is past time for us to take action.

Government, business sector, and citizen corruption all have an impact on development programs through skewing decision-making, budgeting, and execution procedures. Corruption occurs when those in positions of power abuse their power for personal benefit, denying citizens' involvement and diverting public funds into private hands. The poor are on the losing end of this corrupted chain, with no public assistance or the services they require. Wealth is captured in a corrupt atmosphere, income inequality rises, and our governing capacity is weakened, especially when it comes to meeting the needs of the poor. These outcomes create a situation in which the poor are trapped and growth is stifled, requiring the impoverished to rely on bribes and other unlawful payments to obtain essential services.

India is practically associated with the word corruption, if not entirely. The narrative of corruption has been explained by numerous frauds in recent years. It has an impact on almost all government ministries.

In India, corruption is recognized as one of the most significant causes of poverty. The worst form of corruption is seen in the Public Distribution System (PDS). Entitlement programs and social spending plans, which are designed to benefit our society, are the most common sources of corruption in India. All such programs like MNREGA aimed at the poor and needy have failed to impress and assist them. Instead, the impoverished are denied basic rights and needs. In India, corruption is like an endemic disease. It causes socioeconomic inequities and harms our country's economy. Funds intended to help the underprivileged are being misappropriated. Corruption in the public sector exacerbates poverty. Even the simplest task is not completed without the use of bribes. Economic growth is also slowed and diverted by corruption.

Despite the government's efforts to achieve "inclusive growth," corruption continues to play a role. Funds intended to help the underprivileged are being misappropriated. Corruption in the public sector exacerbates poverty. Even the simplest task is not completed without the use of bribes. Economic growth is also slowed and diverted by corruption.

The wide gap of rich and poor in India

In India, the disparity between rich and poor is a major concern. It has been on the main agenda of most of the major political parties for some time, and it is still on the agenda, although there has been little progress in this area. In India, the rich have gotten richer while the poor have gotten impoverished over the last few decades. This is because the most common way for people to become wealthy is by exploiting the work of others. They strive to maximize their profits while paying their staff as little as possible. Because there are so many impoverished individuals, competition for jobs is constantly fierce, lowering wages. It's a pretty effective technique for making the wealthy even wealthier.

Even though the government has made numerous attempts to close this gap, all of the plans, some of which were part of five-year plans and excellent concepts from highly educated individuals, were not implemented in the best way possible due to corruption, and as a result, it has taken much time. If everything had been done properly, the situation would not be as bad as it is today.

Income Inequality in India is another important issue why this endures. Because the impoverished cannot afford further education, persons in this class must rely on their physical strength to earn a living and most people in this class work in factories or other organizations. Their salaries and purchasing power are exceedingly low, and they are actual victims of inflation. They become ill due to a lack of education and understanding about the issues, or perhaps because they are unable to purchase excellent items and high-quality foods.

A notion to stop Poverty

Poverty can be alleviated by enhancing food security by providing three meals per day and ensuring that they are healthy, as well as offering low-cost housing and providing sufficient education and amenities so that they can earn well, care for their families, and have a tranquil life. Population awareness is important because if the population is under control, the country's economy will improve and progress toward development, lowering poverty levels. Poverty is becoming a challenging challenge for both individuals and governments to solve. In India, Poverty is high compared to other countries due to the poor growth rate of per capita income per person.

Due to a shortage of job possibilities, many individuals work as rickshaw drivers, construction workers, domestic servants, and other low-wage jobs, resulting in slum living. In addition, lack of land resources has been one of the major reasons for poverty in India; even small farmers in our country are poor since they cultivate but do not receive adequate compensation in terms of profit, resulting in poverty.

One India is home to billionaires and geniuses, nuclear weapons, technology, and democracy. People who struggle to put food on the table regularly live in the other. Poverty is a problem that affects the entire country, not just one person. It should also be dealt with as soon as possible by putting in place efficient procedures. Furthermore, poverty eradication is now a requirement for people's, society's, country's, and economy's long-term and inclusive growth.