Why younger generation is not believing in marriage? 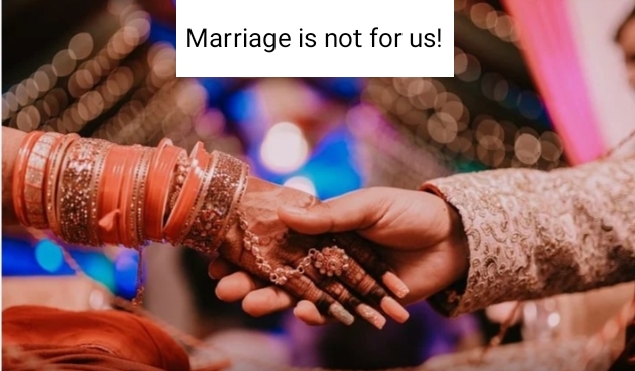 The meaning of marriage has been liquid over the long run and between societies. According to a psychologist Everett "In American relationships, as they have developed, the ideal is to wed by shared consent and construct above all else a relationship," "Among some Amazonian social orders, the marriage relationship is initial a financial organization, with clear division of work, from which a relationship may create," he said.

And according to Hindus , marriage orchestrates two people for extreme forever with the goal that they can seek after dharma, arth, and karma. It is an association of two people as mates and is perceived by reasonable congruity. In Hinduism, marriage is trailed by customary custom. Marriage is supposed to be a sacred association. It is additionally a significant social establishment. Relationships in India are between two families, rather two people.

But now the question arises why does the younger generation seem to neglect all the things and tend to not get married for their whole lives. The answer to this lies within the problem this generation faces.

Firstly and the prime reason I would say is that nowadays people or millennials as we say are deeply  heartbroken and have major trust issues with their partners. 70% of people have had some sorts of experiences before in their lives which had such a profound impact on them in many ways and some of them even might have lost their faith in love and relationships. And as it is said that once trust is broken it takes years to build it and to engage in a relationship as huge as a marriage, trust is the foremost key.

Contrary to this lies the fact that there are thousands of people who does not get to marry the people, whom they love and wish to spend their lives with. There could be multiple reasons for this, in India basically he major reason due to which many people (couples) struggle to find love and settle is : pressure from the family as parents doesn't approve of love marriage , financial instability and what not.. so because of these reasons they remain unmarried throughout their lives.

Moreover there are other reasons like People being afraid of unsuccessfulmarriages on looking upon the examples of bad/unsuccessful marriages of their friends or relatives or sometimes even in their own families, they do not want to get themselves too in this situation. That is a very huge reason because of which they try to avoid marriage for as long as it is possible.

Also in some relationships after a period of time people tend to loose interest in each other and the love fades away which eventually leads to separation of hearts and maybe divorce .

Another reason what i think is that nowadays people tend to live together before marriage commonly known as "live-in" relationship. It is not bad at all but the thing is living together before marriage kills all the excitement between people and nothing new is left in the relationship which can be a reason for people not opting marriages. Also With live-in relationships getting normal and dating applications accessible only a couple clicks away, the idea of responsibility, devotion and dedication have taken a rearward sitting arrangement for some. Truth be told, our age is developing more slanted towards hook-ups than responsibility. Is sexual delight something that recent college grads are depending on today? "Focusing on somebody for life is a major obligation. I see individuals remaining together in a cold marriage only for having regard in the public eye. At that point, there are situations where individuals outgrow love inside a couple of long periods of relationship.

Now the reason which I'm going to list is, rather personal which depends on a person's sexual orientation. In countries like ours, even now in the 21st century and after the legalization of section 377 there are thousands of people who are too afraid to come out in front of the world, even families. There are people who tend to keep their sexuality a secret just for the sake of family's name or even maybe due to the pressure from the family.

Geographically speaking there are many regions in the World where the sex ratio of girls is much less than boys , which automatically adds on to the fact that number of people getting married is declining over the years.

Now another very important reason in my opinion is financial insecurity which is pretty self explanatory.  There are many cases where the girls earns more than boys and then due to this instability and imbalance they do not find people compatible to them. Moreover youth’s inclination towards career has drastically changed over the years as now everybody believes in creating a strong career first and then thinking about the marriage.

There might be more reasons to it but according to me these were the main reasons to why the younger generation is doesn’t wanna get marriedand for different people the definition of love and romantic relationship is different so we want can’t say what’s best for one might not be even good for other.