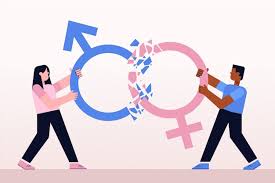 Being born in a world with expectations can often distort the "truth." And what is truth? More often than not, we are born into a prescribed "truth," a way of being, defined by the gender we are born into or culture and, most often, religion. This is what determines how different sexes behave and relate to each other.

Anything other than that is a distortion of the authentic way of being or the right way of living, just like how women have been taught to be tolerant and to water themselves down to be a version of themselves that is appealing to men. And yes, I said it because men always expect to be applauded for giving the bare minimum in relationships. After all, at least they tried.

I am often surprised by men with shirtless pictures on dating sites who complain about getting the same kind of woman that is just out to play with them. Or the ones with no other picture but party pictures with the same complaints. My advice to them is always the same: "women do not take you seriously when you thirst trap and when you look like all you do is a party."

I say this because everything that makes a woman less unique to a man also makes a man that much less remarkable to a woman. If how men value women is based on how women respond to a disrespectful approach, then indeed, there are a lot of men who still need to learn about equality.

There is the golden life-changing advice women are given so that they can be better able to attract the attention of men, "he will not marry you if he parties with you; he will marry the woman he takes to decent restaurants." Why have we not taught women not to marry men who party with other women in the same breath, or should she be delighted to at least be selected out of the many that men may have?

My thought is always double standards much? Why do men expect to be immune to a standard of good behaviour that women are expected to follow or achieve?

Under fascist regimes, women were urged to perform their traditional gender roles as wives and mothers, as this was the most extraordinary achievement women could ever attain. Not to disregard the beauty of marriage or motherhood, but to say to each his own.

Let the “truth” of women’s greatness come from self-awareness and not misogyny. As much as the “truth” of what women should accept in a healthy, loving relationship comes from self-love and not sexist double standards, so should it be for men.

I do not want to seem brutally feminist as my ideas of sexism and double standards in some way also apply to men, the prejudice and discrimination they suffer if they are not “strong” enough.

That is to say, the fostered stereotypes that define men as battlefield heroes and do not allow them to fail at anything but that which is “feminine.” So more often than not, they suffer silently and are ashamed of or ridiculed for not simply drinking away their problems and focusing on being war heroes.

Sexism can exist in several ways. It is okay to be cultured and religious, but never to do it blindly without understanding the significance of the “truth” that we decide to subscribe to as men and women. But be prepared to be judged by the same measure with which we have judged others. So how about we say no standards at all?

There are no estimates of gender-based right or wrong and create a fair moral ground to rule us all. Sex-based inferiority and superiority cannot strike a healthy balance in a relationship if either one of the two parties refuses to subscribe to sexism.

There are several types of sexists which are hostile, benevolent, and ambivalent. These can be on different levels, such as institutional, interpersonal, and internalized, and all of these manifest in regulations, behavior, speech, gestures, practices, and traditions, amongst many others.

According to the Human Rights Channel, sexism produces feelings of worthlessness and self-censorship, affecting both men and women as individual acts of sexism can create an atmosphere of intimidation, fear, and insecurity. This leads to the acceptance of violence and abuses out of fear or rather a feeling of deserving or accepting “punishments” for acting out of character.

Building relationships on sexist double standards fuels strife and a common division from unmet expectations set by sex and gender dynamics. So, when self-actualizing, let us be aware of the root of the awareness of self.

Let us understand whether it is socially/religiously constructed or sex and gender-related. When creating a checklist, we must determine the basis of the expectations or standards to be met; sexual orientation, religion, or culture? And whichever one we choose, are we willing to accept someone bringing their version of truth governed by a similar standard?

We need to understand the manipulative and hostile nature of sexism in believing that men or women need to be kept in their place by anyone who holds their gender in higher regard than others. We need to start thinking that equality and fairness exist to serve their purpose alone and that it is not okay to hate other sexes because we feel we are justified to stereotype them.

So, when it is all said and done, let us build relationships with core values that do not leave us vulnerable to disappointment. We are born of sexist double standards simply because we think we are men or women and therefore more deserving of immunity to specific standards. Instead, let us rethink our standards and the essence of their value in the life we want to live and the relationships we hope to build.

How I Have Experienced Gender Stereotypes