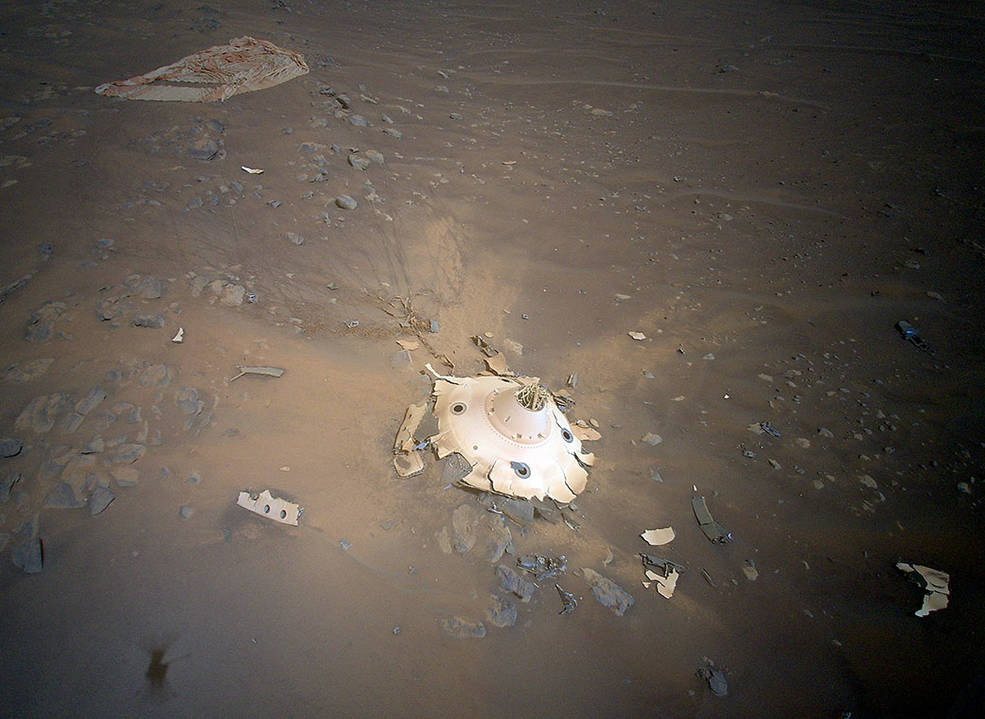 Flight 26
NASA’s Mars Helicopter Ingenuity (Flight 26) on 19th April, captured some pics of the parachute and the cone-shaped backshell that helped the agency’s rover and protected it in deep space and during its descent towards the Red Planet on Feb 18, 2021.  An analysis of these images could be of great value for future missions. The pictures were clicked during the 26th flight and hence the name flight 26 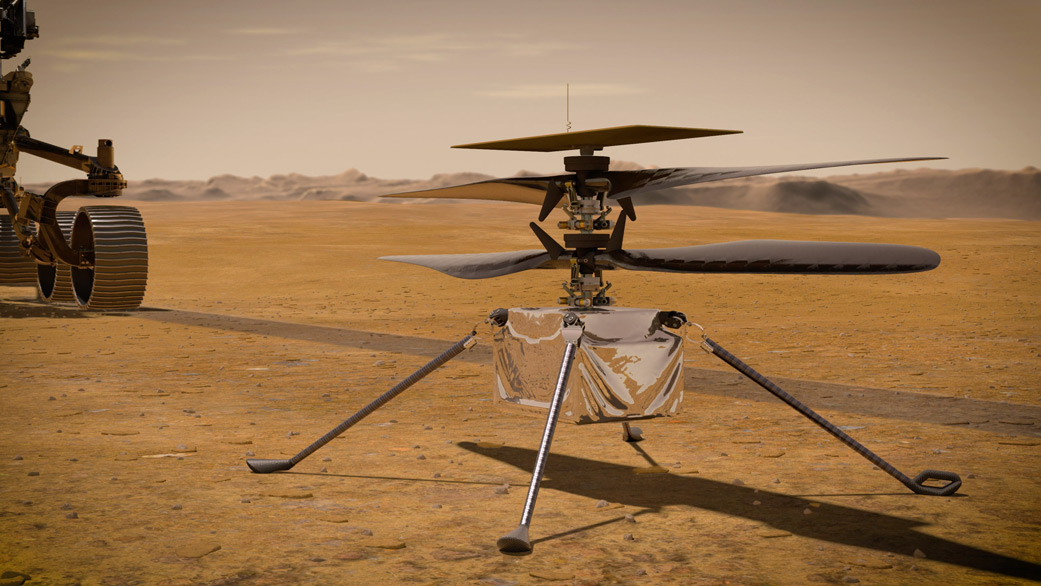 The mission lasted 159 seconds and began at 11:37 AM Mars time on the 19th of April. The images were captured from 8 metres (26 feet) above the ground. Ingenuity travelled 360 metres (1,181 feet) and clicked 10 Aerial colour images. Ingenuity’s team lead at NASA’s Jet Propulsion Laboratory in Southern California, Teddy Tzanetos citing Mars Sample Return’s reconnaissance request as an example said that Ingenuity operations provide pioneering flights like this and every time they’re airborne, it covers a perspective that no other planetary mission could do.

Ingenuity had to do a lot of manoeuvring to get the required shots, albeit previous flights and its pilots could handle aerial acrobatics, said Harvard Grip, chief pilot of Ingenuity at JPL. Entry, descent and landing on the planet are equally stressful for both the engineers and the vehicle undergoing all the extreme processes that come with it when entering Mars’ atmosphere at approximately 20000 km/h.

While the Parachute and the backshell were previously clicked by the rover from a distance, the ones clicked by the rovercraft from both aerial and close perspectives provide a clearer picture which could potentially ensure safer landings for upcoming spacecraft like the Mars Sample Return Lander which make a detailed analysis of the Perseverance Martian rocks, sediments and atmosphere possible.

The Ingenuity had spent 49 minutes flying and travelled 6.2 km (3.9 miles) while on Mars. Ian Clark, now Mars Sample Return ascent phase lead and former Perseverance systems engineer said Perseverance had the best Mars Landing so far and that Ingenuity’s images offer a unique vantage point and that the images would still be phenomenal if they don’t reinforce their understanding of the system’s working or provide a new dataset of engineering information for the Mars Sample Return Lander.

The 27th Flight would explore the Seltah ridge in Jezero crater dry valley. This region represents the vestige of a river delta that spilt into a lake in the Jezero crater. This, unlike all the previous terrains Ingenuity flew over, is several miles wide with an array of geological features. Finding signs of life forms that might’ve existed in the ancient delta is the goal of this mission. Ingenuity would take a bird’s eye view of the terrain partly for scouting a route to the delta’s peak for Perseverance rover. The helicopter would then search  spots for the rover to  collect geological samples and send them to earth for an analysis

The Ingenuity was created by JPL, which deals with the same for NASA Headquarters. Astrobiology is the aim of the Perseverance mission. The rover will paint a picture of the planet’s geological history and make the human exploration of Mars a possibility. It is the first mission ever to collect Martian regolith.