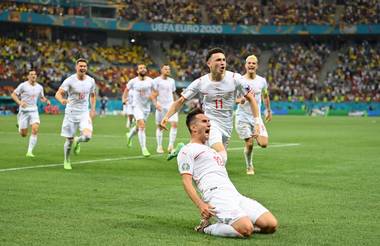 Switzerland went against France at the National Arena in the knockout stage of Euro 2020. The French team was the favorite on the paper. A mid-field consisting of players like Kante, Pogba, and Rabiot could change the flow of the game even on the off days. To back that mid-field the likes of Mbappe, Giroud, Benzema, and Griezman, who never shy in front of goal.

Switzerland needed more than sheer luck to go to the next round. France started with a new system three at the back. Switzerland took an early lead as Seferovic raised high to head Zuber’s cross in the back of the net. France, with this new system, was not as comfortable as they usually are. Swiss failed to double their lead after Lloris saved Rodriguez’s spot-kick, which kept France in the game.

With the second half in sight, Lenglet was sacrificed to switch back to their original shape. With their original system, it didn’t take them much time to get back into the game. With two quick goals from Benzema, France restored their dominance.

To rub salt on the wounds of Switzerland, Pogba showed a glimpse of his quality. He picked up a loose ball to bend the ball past Sommer from outside the box.  The ball twisted and swirled in the air to end up in the top corner. With two goals down in the final 15 minutes of the game, Switzerland was almost out of the game.

Seferovic once again rose high than anybody else to give hope to Switzerland hope once again. Pressure started to build on both sides. Under this pressure, Gavranovic came to equalize the game for his team and force this fixture into extra time.

Even extra time wasn’t enough to force out a result. As both teams lined up to take penalty shootout, it was all about who could hold on to their nerves till the last spot-kick. Mbappe came out for the final spot-kick, which would continue the shootout. Sommer came out big; he went the right way to pull off the unthinkable. The match ended 5-4 on penalties as Switzerland progresses through the next round, leaving the French players heartbroken.