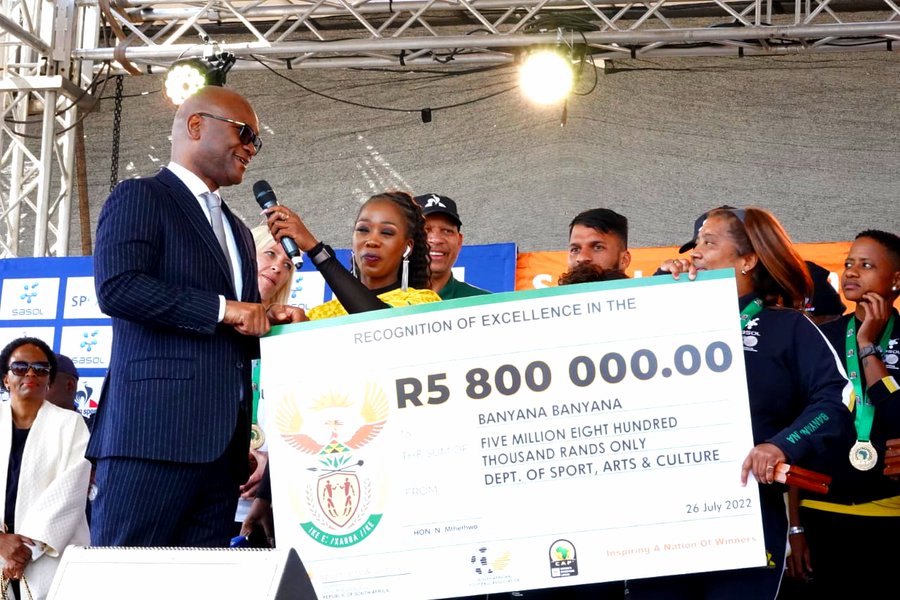 It has been years of heartbreak for Banyana Banyana after finishing as runners-up five times in the WAFCON. Still, finally, the gods of football have blessed the South African senior women's national team with the trophy.

Mthethwa said that law would soon be implemented that Banyana Banyana and Bafana Bafana players would be paid equally.

"It is going to be a law in this country for Banyana Banyana and Bafana Bafana to be paid equally because we are making that happen as government. It's not only this team but all women's teams. We are supporting them as the government", Mthethwa said during his speech.

The Minister announced on his Twitter account the financial booster the Sports, Arts, and Culture department has injected into women's football.

"In addition to the R15 million investment we made over the three years in women's football and the R92 million investment set aside moving forward, today the Department of Sports, Arts and Culture announced an R5.8 million contribution for @BanyanaBanyana's #WAFCON2022 victory", Mthethwa wrote on his Twitter account.

"The celebration is an hour for us as a country and for the team; you have done a magnificent job; congratulations", Jordaan said.

These are exciting times for women's football. We will have to see how things progress as time goes by.

Banyana Banyana is setting its focus on the Women's World Cup that will be held on 20 July 2023 in New Zealand and Australia.