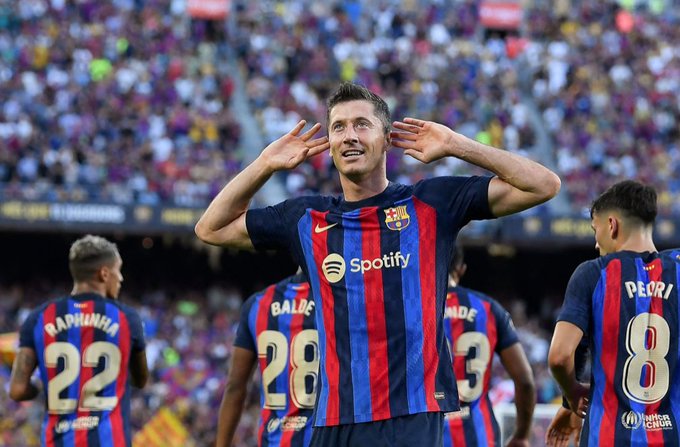 Lewandoski has settled into life in Catalonia more quickly than people anticipated. The Polish striker has four goals in his three La Liga appearances, making him the current top goal scorer alongside Betis striker Borja Iglesias.

The former Bayern Munich striker is one of seven players nominated for the new campaign's first Player of the Month award. He is nominated along with forwards Chimy Avil, Vini Jr, Borja Iglesias, and Celta Vigo striker Iago Aspas.

The Barcelona coach Xavi has praised the brilliance of Lewandoski. Xavi believes the award-winning FIFA player of the year is a natural leader that will elevate the club this season.

"I think Lewandoski is an extraordinary player. He is a natural leader and a born worker. He is an example for the squad", he said

"Lewandoski is a natural goal scorer, but he also helps us a lot in defence".

"We all know what Lewandoski can do. He's a striker of the highest calibre", he said.

Lewandoski scored two goals against Valladolid and walked away with the RAC1's man-of-the-match award. This was his scored award after walking away with the first one against Real Sociedad.

The Culers last won the La Liga trophy in 2019 and last won the Champions League in 2015. This has been the longest drought for the Spanish side; Lewandoski vowed to deliver this season.

"It's been way too long since Barcelona won titles. It's the perfect time to win some, and I'm sure we'll do. We're going to win titles, for sure". The Polish striker told the media.

Lewandoski hopes to continue building a telepathic understanding with Barcelona's playmaker Pedri. Pedri has contributed to Lewandoski's four goals for Barcelona in the league.

On 3 September 2022, Barcelona will go against Sevilla at the Ramos Sanchez-Pizjuan. The Pole goal-scoring machine will be hoping for more goals when he is in that encounter.