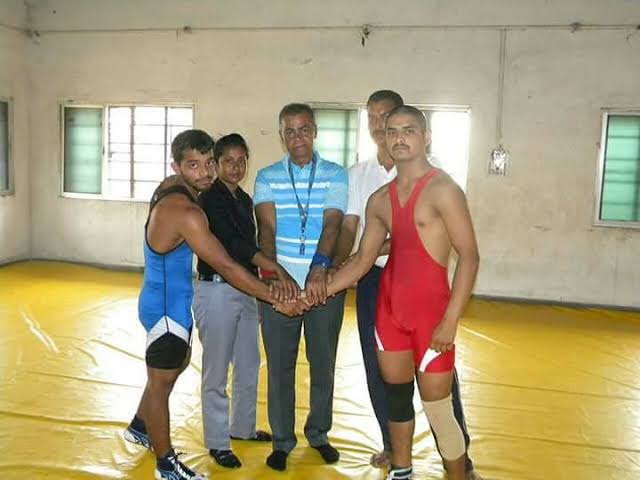 It's 4:00 pm on a balmy and summery Sunday, boys line up outside the locker room to get into their grappling attire on the first floor of the wrestling club while girls have a separate arrangement made for them on the second floor. Practice starts at 4:30 sharp after which no one is allowed to step on the wrestling mat. It’s a two-and-a-half-hour-long training that starts with a warm-up drill for thirty minutes followed by one hour of rigorous amateur wrestling and concludes with one hour of weight training.

Asit Kumar Saha, the 70-year-old owner and keeper of Panchanan Wrestling Club at Jorabagan steps in at around 5:00 and administers the session while the head coach Runu Ghory has made the club her residence along with a dozen other boys and girls due to the pandemic. After the practice, Asit a retired wrestler with many national and international medals to his name takes Runu and a few others to the market to fetch some groceries and perishable items like butter, pulses, vegetables, and milk. The moving fact is that the veteran wrestler pays for all of this from his pocket.

The club which was established in 1881 has around 50 odd students (from ages 12 to 25) but most of them aren’t able to turn up for practice because of the covid induced restrictions. "All our students come from remote villages of West Bengal like Mecheda, Mathurapur Hoogly, etc and they hail from underprivileged families as their parents do odd jobs to make a living". With the suburban train services being suspended, they have no other alternative for transportation. I’ve heard many of them had to start earning as well because their parents’ income has gone dry because of covid-woos. But a few of them reached out to me saying that they didn’t want to pause their training. So I wasted no time and arranged a matador truck to bring them here. So, for about a year now, 17 students are living and training in the club. I’ve been providing everything I can from my side" said Asit in a telephonic interview with the social talks.

Mr. Asit has marshaled several necessities like a small refrigerator, a television set, a single burner stove along a cooking gas for the students. He also looks after their diet which has to be rich in protein as they are in one of the most physically demanding sports. “I buy all kinds of vegetables and fruits for them along with butter and milk every single day. The only catch is they can’t cook any nonvegetarian items inside the club. I call them to my house sometimes which is just a few blocks away from the club to serve them some non-veg platters” said Asit.

When asked about the days-of-yore of the club, Asit said “my great-great grandfather started this club in 1881. Back then it was an open club where locals came to have fun and see show bouts. Then my grandfather made it a prominent and celebrated club when he started to organize ‘dangals' where wrestlers from all around the country came to wrestle for money. This club has been a stepping stone for many grapplers including K. D. Jhadav who used to train with my grandfather. He was trained here for six months before leaving for the 1952 Olympics held in Helsinki and the rest is history. Even Bollywood’s acclaimed actor Mithun Chakraborty used to wrestle here with me, he was a state champion back in the days”.

Till 2005, the club consisted of just a dug-out hole filled with seawater sand with a small asbestos roof over it. But Asit had been harboring a dream to overhaul the whole structure into a two-story building with sprawling wrestling mats and up-to-date equipment. When asked about external funding, Asit said “the Wrestling Federation of India allocates a minuscule amount to us which entirely goes towards the maintenance of the building and equipment. The majority city of the expenses is paid by me. Back in 2006, I renovated the whole club and made it what it is today. All the expenses were forked out by me. I don’t take a single penny from the students. Our family business keeps us rolling by god's grace. But the tragedy is, even after giving my everything to the sport, not many are interested in this game. Kolkata's metropolitan ids are wooed by cricket, football, tennis but not wrestling, maybe its because this is not a very polished sport and it calls for a lot of dedication”.

It's an irony that India's highest-grossing film is based on wrestling but the sport is dying a slow death throughout the country including Kolkata where people like Asit are going the extra mile to reach out to the mass to to to to to to tosses but to avail. Panchanan Wrestling club has fostered more than 32 national champions and 16 international champions, but now, only a few remain to carry the legacy of this club which is in a quandary.