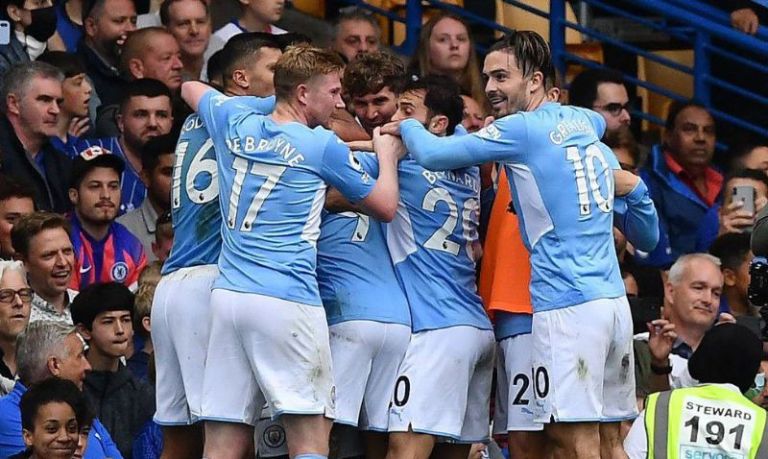 Defending champions Manchester City shrugged off a poor result against Southampton to beat Chelsea by a goal to nil, at Stamford Bridge. In what was a much-awaited clash between the Champions of Europe and the Champions of England, a Gabriel Jesus goal in the 53rd minute, proved to be the difference for the visitors.

When on the ball, City applied continuous pressure on their opponents who never really got going. A high work rate and high-intensity pressing off the ball allowed Manchester City to be in the driver’s seat going into halftime. In the second half, a shot by Joao Cancelo was brilliantly controlled by Gabriel Jesus, whose shot then hit the back of the net after taking a deflection off Jorginho’s leg.

The game became more open after the 60th minute. Chelsea tried to get a goal back but ended up allowing more spaces for the City forwards to create problems. Their goalkeeper Mendy saved 2 shots from Jack Grealish, to keep his team in the game. The home team’s efforts of an equalizer went in vain as they could not breach a solid City defence.

This was the first win for Pep Guardiola’s players against Chelsea in the last 4 games. His team finished the game week in 2nd place behind Liverpool whilst Chelsea slipped to 3rd. They face Liverpool and Southampton respectively in the next round of Premier League fixtures.

Arsenal earned the bragging rights in North London after a solid display against local rivals Tottenham Hotspurs, at the Emirates stadium. It was a much-needed win for Mikel Arteta’s players who through clever movements and passing, outclassed the Spurs who once again failed to create a significant number of chances.

Midfielder Emile Smith Rowe opened the scoring for the Gunners in the 12th minute after finishing off Bukayo Saka’s low cross from close range. He then assisted the second goal as he set up Aubameyang after a swift counter-attacking move in the 27th minute. Then Bukayo Saka capitalized on a mistake by Harry Kane as he netted the 3rd goal for his side, 7 minutes later.

Chasing the game by 3 goals at halftime, the Spurs made a couple of changes that helped them regain some momentum but could not unlock a rigid Arsenal defence. However, Son Heung Min got a goal back for his side in the 79th minute but it proved to be a mere consolation as the Gunners won by 3-1.

It was another disappointing outing for Tottenham as they conceded 3 goals for the 3rd game running. As for their opponents, it was a vital victory as they jumped ahead of Spurs into 10th place. With no European fixtures to worry about, Arsenal has a great chance of turning around their fortunes this season.

Points shared in a thriller at Anfield