Controversy Brews As Dillian Whyte Walks Away With A Victory 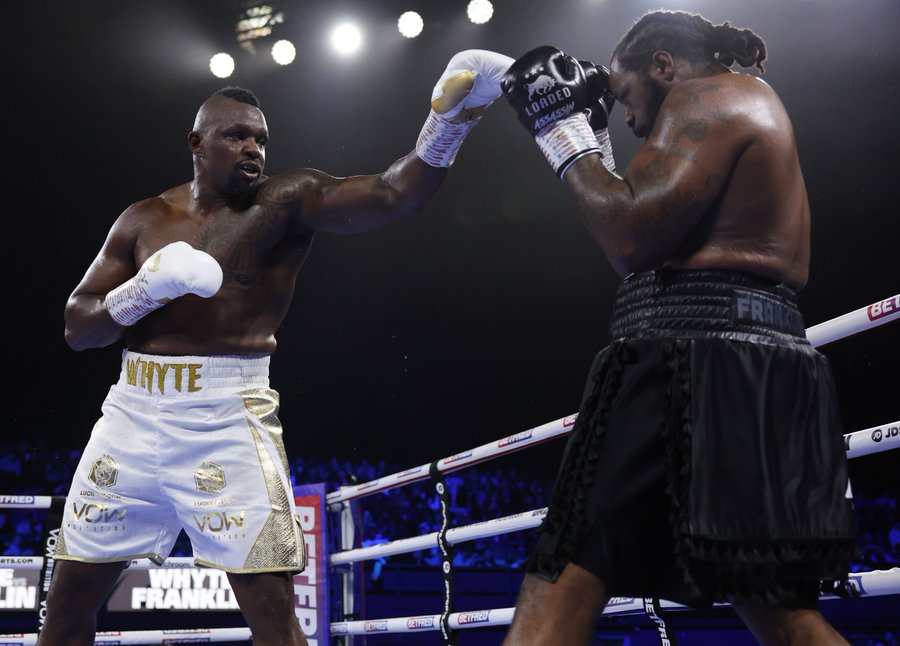 A very tight affair as the fight between Dillian Whyte and Jermaine Franklin promised to be filled with entertainment. Whyte had all to lose as he was the favorite to win the battle. He held all the experience.

The pressure was on Whyte, who held a record of Twenty-eight wins, three losses, and zero draws, to deliver as he was the more experienced fighter. On the other hand, Franklin had a history of twenty-one wins, zero losses, and zero draws. This was a match made in heaven for both fighters, as an opportunity to fight Anthony Joshua was on the line.

Franklin came out guns blazing in the fight round, putting the former WBC heavyweight champion on his toes as he tried to get an opening opportunity for a left jab. However, Whyte showed his class as he handled the situation.

In the second round, Whyte reverberated forward more, targeting the body of Franklin; however, Franklin used his hooks well and managed to get through with some punches to score some points.

In the third round to the sixth round, the ‘989 Assassin’ Franklin made things difficult for Whyte, giving him no chance to gain momentum. Whyte grew frustrated as he could not connect his hands to Franklin.

In the seventh round, Whyte managed to dominate as he used his jabs sufficiently, which assisted him in moving the American back, allowing himself to have an edge on him.

But the American fighter Franklin returned in the eighth round; his tenacity and drive worked in his favor. His jabs caused Whyte to delay his punches as Franklin frustrated him.

For most of the ninth round, the former WBC heavyweight champion settled for his left jabs, allowing himself to take control of most of the competition. However, the 989 Assassin landed a right punch, and that caused trouble for Whyte. Franklin ended the last minutes of the game on top.

Franklin's momentum followed to the eleventh round, but Whyte’s experience came to the fold as he slowed down the tempo, but they banged lumps out of each other. Franklin did his best in the last round, as he took the fight to Whyte, but Whyte landed a huge right hand and caused Franklin to wobble stoppage time forced Whyte to halt as he was aiming to close off the round with a knockout blow.

Whyte won the bout by majority decision, and he will have another chance to fight Anthony Joshua after he was defeated in the seventh-round knockout and lost his title in the process in 2015.

The final scorecards from the judges have raised eyebrows. Franklin said that he had been robbed and that the decision was against him. He feels a rematch will be sufficient, and he is open to it.

“I feel like I honestly won the fight, 7-5. I feel like I was holding him off and doing good with the jabs and making him miss a lot, so to hear the decision was kind of crazy to me, but I am open to a rematch if he gives it to me. I am down to go to war with anybody,” he said in the post-fight press conference.

“I thought it was Bullsh*t; as I said, I think I was robbed.”

Franklin’s promoter and former boxer, Dmitriy Salita, has come out and stated that he also believes the decision taken was controversial and has indicated that he thinks the press knows that too.

“He (Franklin) is undefeated, we felt he won, all the press thought he won, and a guy that travels thousands of miles away and comes to this country (England), and we get the sour end of the decision," he said. Fans' tweets suggested that Franklin was robbed. He stated that the decision was wrong and Whyte was outboxed.

“Boxing has always had an underbelly of being a bit dodgy, but after 35 years of loving the sport I think I’m finally done with it,” wrote @Scotthendry7.

Another weekend of shocking scorecards. Whyte lost that,” wrote @bens_