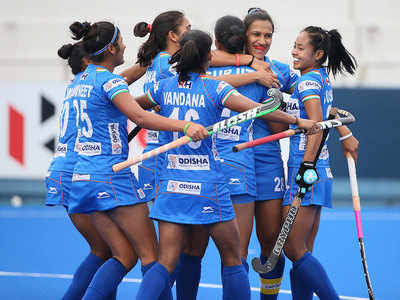 Some moments only exist in the realm of our imagination.  Today Indian Women's Hockey team has lived one of those moments. After failing to register even a single win at Rio Olympics, this team has come a long way. Losing the first three matches in the Olympics is not an ideal way to begin your campaign. Many started to rule the Indian team out of the medal race. Yet the Women's team showed that their dreams and ambitions are not meant to be underestimated.

When victory was the only option each player stepped up when it mattered most. The likes of Savita Punia, Gurjit Kaur, Vandana Katariya, and Navneet Kaur stood as the pillars on which the Indian team built their foundation. Today Australia was going to move into the semi-finals. On papers, Australia was declared as the winners in this fixture. However, the Indian team was not ready to go down this easily. From the beginning India's defense was intact and they were hard to break down. The attacking mindset of the Indian team was clear- operate in spaces and attack opposition's half with numbers.

The Indian team has struggled to score on a penalty which was evident against Ireland.  However, this team turned this weakness into their strength. Only one goal was scored in the match by Gurjit Kaur which came on a penalty. Australia is not a team that would go down so easily. They kept on knocking but couldn't find a break. Savita Punia stood like a wall between their win and defeat. For Indian fans, it is like a dream which they would not like to end for some more time.

Even the men's team has qualified for the semi-finals for the first time in 41 years. They will look forward to continuing their hot form against Belgium. This match will be played tomorrow at 7:00 am. Both Indian teams are two steps away from winning a gold medal.