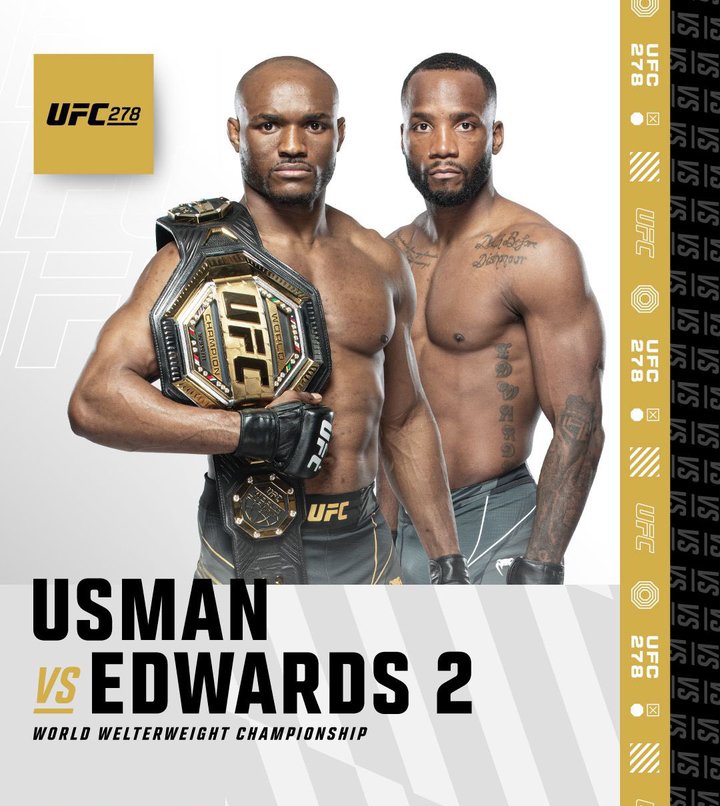 On Saturday, 20 August 2022, UFC 278 takes place at the Vivint Arena in Salt Lake City, as ‘The Nigerian Nightmare’ Usman takes on Edwards in a rematch clash.

Usman and Edwards’s first bout occurred in 2015 when both men still found their feet in the UFC. The first meeting between the two was the most competitive, but eventually, Usman won after three rounds via a unanimous decision.

Usman comes in the fight with an excellent record of fifteen wins and zero losses in the UFC but has lost once in his MMA career in his second professional fight against Jose Caceres in 2013.

The Englishman Edwards has a record of eleven wins and two losses in the UFC, losing to Usman and Claudio Silva via a split decision.

Both fighters come into the clash having won their last bout, respectively. Usman won his bout against Colby Covington via a decision in 2021. While in the same year, Edwards won via a decision against Nate Diaz.

The Brits believe his second bout with Usman has come at a perfect time. He feels he has prepared well for this bout compared to their last one in 2015.

“All I've been doing is training”, he said. “The Khamzat Chimaev fight (that was cancelled three times), for example, that’s three camps. I've done many camps and improved leaps and bounds. Now is the perfect time for us to fight. Looking back on it now, I think those years were blessings in disguise. It gave me time to hone my skills and polish what I needed; while he's competed, he has also been to wars. His body is breaking down, and I think now is a perfect time”.

“I've always given him his respect; I think he’s a good fighter, an excellent fighter, but lately seems like there's a bit of disrespect coming from his side. Maybe he thirsty for wanting to be champion so much that he got to get disrespectful, and it is what it is”, Usman said.

UFC 278 will bring entertainment; we might see a turn of events this weekend, or maybe Usman will continue his title streak