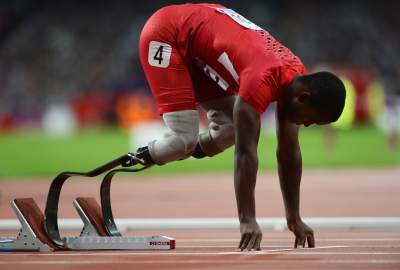 The recently concluded Olympics has still not left the minds of the people completely. Like sandalwood applied to the skin, the fervour is taking its own time to rub off. But that is not a bother. Starting 24th August, the Paralympic games will begin. The Indian team has already been sent to Tokyo to participate in the events. The games will go on till September 5.

The Paralympic games were the brainchild of Sir Ludwig Guttmann. In 1944, there were many Britishers who were injured because of World War 2. Guttmann was asked to open up a National Spinal Injuries Centre at Stoke Mandeville Hospital. At the time, many Britishers who took part in the war were recovering at the hospital. Guttmann was someone who thought of sports as therapy. He thought that the disabled might regain their strength and self-respect.

On July 29th 1948, he organised the Stoke Mandeville games for those with spinal injuries. The Summer Olympic Games began in London on the same day that year. The games were again held in 1952, but this time their Dutch counterparts also took part. It continued to go on once every four years and gradually gained popularity. In 1956, Guttmann was awarded the Fernley Cup. By 1960, the games became immensely popular. It was also the first time that it was played somewhere outside the UK. It was held in Rome a few days after the Olympics.

These games saw 400 athletes from 23 different countries. But it didn’t come without problems. The stairs in the rooms where the athletes stayed were not wheelchair friendly. They had to be carried to and fro by military personnel. Later on, the conditions improved.

In 1976, racing wheelchairs were introduced. Games were also held for athletes who were visually impaired. In 1980, people with cerebral palsy could also participate. At the time these games were not held in the same venue (sometimes not even in the same country) as the Olympics.

There was a need felt for s separate body to govern the Paralympics by the International Olympics Committee (IOC). In 1982, the International Co-Ordination Committee of the World’s Sports Organisation for the Disabled (or the ICC) was formed. This body rallied for the Paralympics to be considered equal to the Olympics. In the 1988 Seoul Olympics, the Paralympic athletes finally got to play in the same place as the Olympics athletes and were provided the same facilities.

The International Paralympic Committee (or the IPC) replaced the ICC in 1989. They included several disabilities and sports in the games. The board organised their first Paralympic games in 1994 at Norway. They moved into their own headquarters in Germany in 1999. In December 2001, Sir Phillip Craven replaced the then head of the IPC and is the current head. He’s a British ex-Paralympian.

The Paralympics has two versions, summer and winter, just like the Olympics. Some games are similar, too. For example, cross-country skiing, swimming, cycling, and archery. There are six disabled groups - visual impairment, celebral palsy, spinal injuries, intellectual disabilities, amputee and les autres (or athletes who don’t fit the other categories).

Deepa Mallik was the first Indian woman to win the Paralympics in 2016. She won silver for Shot Put. She is the only Indian woman who has won a Paralympic medal. Other notable winners are Joginder Singh Bedi, Rajinder Singh Rahelu, Bhimrao Kesarkar, Girisha Nagrajegowda, Mariyappan Thangavelu and Varun Singh Bhati.

This time, two male athletes qualified for the first time for archery. They are Harvinder Singh and Vivek Chikara. This time a total of 54 athletes have been sent to Tokyo, the highest ever. This is also a huge leap from the 19 athletes who were sent to Rio in 2016. Mariyappan Thangavelu, who won gold in the 2016 Paralympics, will be the flag-bearer this time. The Paralympic performance in Rio was better than the Olympic performance last time. We have to wait to see if that happens again.

Despite being made parallel to the Olympics, the Paralympics have yet to receive enthusiasm and excitement. Paralympic athletes wish to see a future where they receive the same media coverage as the Olympic athletes. But the road to that is still a long one.

The next Paralympic Games will be held in France in 2024. By then, it is assumed that the COVID-19 pandemic will not be there and that everything will return to normalcy. So far there is no proof that people with disabilities are more susceptible to COVID-19 than those without. People who are disabled are more likely to be used to hygienic habits like washing hands, sanitising and physical distancing. This makes them less vulnerable.

The humble beginnings of Paralympics have now become a successful way to make disabled athletes feel seen and awarded. They stand as an inspiration to the disabled in the country they represent. It can be said that the more they are given attention, the more they will continue to inspire.