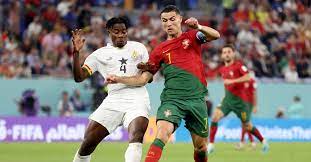 Cristiano Ronaldo is the first player to score in five different editions of the FIFA World Cup; as Portugal started their campaign in the 2022 edition of the tournament with a nervy 3-2 win over Ghana in Group H.

Portugal started on the front foot with Ghana sitting behind and soaking up the pressure with five at the back. Bernardo Silva latched onto a mistake in Ghanian midfield in the 9th minute and passed the ball to Otavio for him to play as Cristiano Ronaldo ran into the space between the two Ghanian central defenders. However, a heavy touch by the Portugal skipper just took the ball away from him into the hands of Ati-Zigi.

Ronaldo thought he had given Portugal the lead in the 30th minute when he bodied A.Djiku to win the floating ball and turned to apply a perfect finish past the Ghana keeper. The goal, however, got ruled out as his tussle with the defender was deemed a foul.

After a relatively silent first half, the second half saw Ghana push for a goal through Kudus as he made a blistering run through the heart of Portuguese midfield in the 54th minute to fire just wide of the bottom right corner.  In the 64th minute, Portugal was awarded a penalty.  Ronaldo fell after contact with Salisu inside the penalty box as he received a flick from Jao Felix and the referee pointed to the spot. The Portugal captain stepped up to give Portugal the lead, becoming the first player to score in five different world cups.

Ghana though, soon found the equalizer in the 72nd minute, as Rahman managed to find Kudus inside the box whose square pass survived a botched clearance attempt from Danilo to set up Ayew for a tap-in. The joy was, however, short-lived. In the 77th minute, Bruno Fernandes played a through ball from the midfield into the path of Felix, who took a touch before lifting the ball past an incoming Ati-Zigi.

Portugal doubled their lead in the 80th minute, as Ghana lost the ball in midfield again. Ronaldo received the ball on the counter and played a back pass to Bruno, who charged ahead before releasing an exceptionally timed ball to Rafael Leao. The substitute applied a curling right-footed finish to whistle the ball into the bottom corner.

However, more drama awaited Portugal as Ghana reduced the lead to just one goal in the 88th minute. Rahman ran down the left wing before lifting the ball which after a deflection from Cancelo landed on Bukari’s head for him to score from close range. Portugal got another scare in the dying minutes as Costa spilled the ball inside his own box, allowing Williams to steal it. However, Dias and Danilo reacted in time to save Portugal the blushes and secure three points for them.

With Uruguay and South Korea playing out a draw earlier today, Portugal now sits on top of Group H. They face Uruguay on Monday, while Ghana faces South Korea.