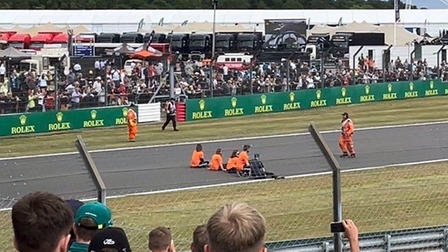 The British Grand Prix took place last Sunday at Silverstone, where seven environmental protestors for Just Stop Oil invaded the track before being arrested and removed from the grounds.

The protest came almost immediately after the red flag had been waved following Zhou Guanyu’s huge crash while cars were still travelling around the circuit. Marshals had to forcibly remove the protestors from the track and prevent another potentially fatal incident. Northampton police released a tweet shortly after, confirming that “a number of people entered the track”, adding, “all have been removed and a number of arrests have been made”.

At the end of the race the winner, Sergio Perez of Ferrari, revealed “I just don’t believe jumping onto an F1 track is the right way to do it. Yes, I support the cause, but I don't think that’s the right way to protest. You could generate an accident”. Furthermore, McLaren’s Lando Norris spoke out on the incident, saying “you’re putting us at risk to be involved in something that we would never be involved in”.

In the days before the highly-anticipated race, both Silverstone and the Northamptonshire police issued a warning in an attempt to deter potential protestors, noting that there was “credible intelligence” that people were planning to protest during the race.

Event Commander, Chief Inspector Tom Thompson commented on the disruption, revealing, “I’m really disappointed that this group of people ignored our warnings prior to race day and made the incredibly dangerous decision to enter the track.”. Adding, “we offered to facilitate a peaceful event at the circuit, but they instead choose to put the lives of the drivers, marshals and volunteers at risk. It is incredibly disappointing that anyone would make the decision to do this. Thankfully we had plans in place for an eventually such as this and the group were swiftly removed and arrested by our officers”.

According to Auto Sport, fan footage shows the protestors walking onto the track at one of the fastest points of the circuit, the Wellington Straight, before sitting down on the track. Luckily, the marshals acted quickly and managed to haul them away before the drivers arrived at that sector of the circuit.

Formula 1 has been very vocal as of late in its pledge to make more environmentally friendly decisions, with an aim of having a net-zero carbon footprint by 2030. However, as Sky F1 pundit Martin Brundle said, “We already had one lucky escape today. I totally 100% support freedom of speech and opinion, but do it responsibly.”

Just Stop Oil has caused chaos over the past few months since its conception, undertaking several unpeaceful protests. Recently, protestors have been preventing people from accessing petrol stations and they have been going so far as to glue themselves to artwork, including Van Gogh’s work.

Undoubtedly, this will not be the last of Just Stop Oil’s protests, however, putting lives at stake is not the way to get your point across nor raise the right sort of awareness.