Records after records are being set in women's football around the world. 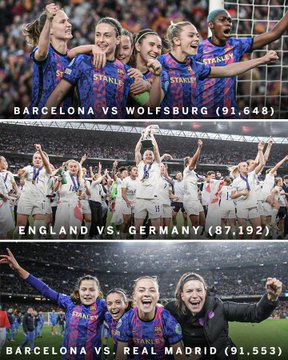 2022 has been an excellent year for women's football around the world so far. This year, we have witnessed multiple women's international and national games, from Africa to Europe, set new records.

Football is a passion shared by millions on the African continent. The semifinal between Nigeria and Morocco was played at the Complexe Sportif Prince Moulay Abdellah in Rabat, delivered a record-breaking attendance of 45,562.

On 23 July 2022, the final between Morocco and South Africa attracted 50,000 fans at the Prince Moulay Abdellah stadium. This is the new most attends Women's African Cup of Nations fixture.

The Lionesses played in a dramatic final against Germany. They came out victorious, ending the match 2-1 in extra time, thanks to a late goal from Chloe Kelly at the Wembley Stadium on Sunday, 31 July 2022.

The final between England and Germany attracted over 17 million TV audiences. The Women's Euro 2022 final was the most watched women's football game in the UK and the most watched TV event of the year.

The BBC director general Tim Davis expressed his pride knowing that BBC could broadcast the game to the public.

"We are incredibly proud to have championed women's football and are thrilled we were able to bring such a memorable sporting moment to the public", Davis said.

On 30 March 2022, the Women's El Clasico took place at Camp Nou in Barcelona. The game was the highest attended women's game of all time.

Barcelona was triumphant, beating Real Madrid 5-2 in the second leg and 8-3 on aggregate in the Women's Champions League semifinal. The game had over 91,000 fans in attendance.

The Women's El Clasico game took place in the men's stadium, and the tickets were reported sold out by January.

Ballon d'or winner Alexia Putellas was in awe of how the match turned out.

"I don't have the words to describe it; it was magical. The game ended, and the fans didn't want to leave. It was incredible", Putellas said.

Barcelona has made historical milestones in women's football. The Blaugrana broke their record, setting up another attendance record for the second time this year.

The Blaugrana announced on 23 April 2022, a new world record attendance of 91,648 for their match against Wolfsburg in the Women's Champions League.

These phenomenal records prove that women's football is getting stronger by the minute and more magnificent records to be broken in the future.