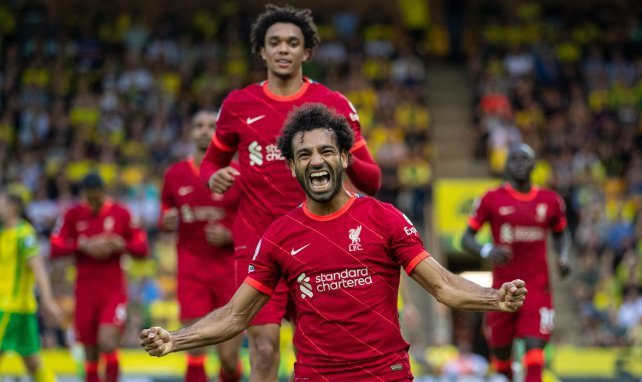 Before their last appearance in the English Premier League tournament, Liverpool team is still optimistic about having an unprecedented chance to win the title. The reds well known opponent this season “Manchester City” is also one match away from owning the league and already on top of the tournament table. Yet, only one point behind, Liverpool on the second place is training for making another historical season looking for quadruple. Players of the reds are working on a mission of achieving that goal through sticking to the hope of any obstacle to hit Guardiola’s squad. Lose or draw on the next Man City’s game would immediately carry the title to the Anfield Staduiem if they managed to win their last game against Wolverhampton Wanderers.

Liverpool’s iconic star Mohamed Salah claimed earlier this week that he and his team feel excited when they talk to each other. Salah expressed his thoughts to beIN Sports interview on Friday and claimed that they must win the next game and then see what happens. The Egyptian king as fans like to call him, have also talked about his earlier statement which he declared a wish to meet Real Madrid on the final Champions League. "When I said I wish we could face Real Madrid, this was as if I said something wrong about them, I am talking about the strongest team in Champions League history, and I said that because of what happened before.” The Spanish team have beat Liverpool in the 2018 Champions League final 3-1 in Kiev. Goals scored by Benzima and Gareth Bale, while the reds' only goal was by Sadio Mane. "The match will be difficult, and this team has won almost against all the strong teams, but I am very excited about the final and I hope we can win it." Salah added.

Liverpool is facing head of the La Liga table this season and 13 times winner of European Champions League next Saturday at the Stade de France in Paris. Liverpool’s Coach Jurgen Klopp who have managed the team to win 2022 FA Cup and League Cup this season have announced recently on a press conference that Divock Origi is leaving the club at the end of this season. Origi didn’t get quite enough participation this season but no one at the Anfield could deny his important existence within the team. Origi, 27, have scored vital goals in several special games. Including the unforgettable taking over against Barcelona in 2019 Champions League semi-finals and on the final of the same year against Tottenham Spurs in the European Cup. “It would be harsh moment when Origi Leaves Anfield” Klopp said.