Saved by the Halo 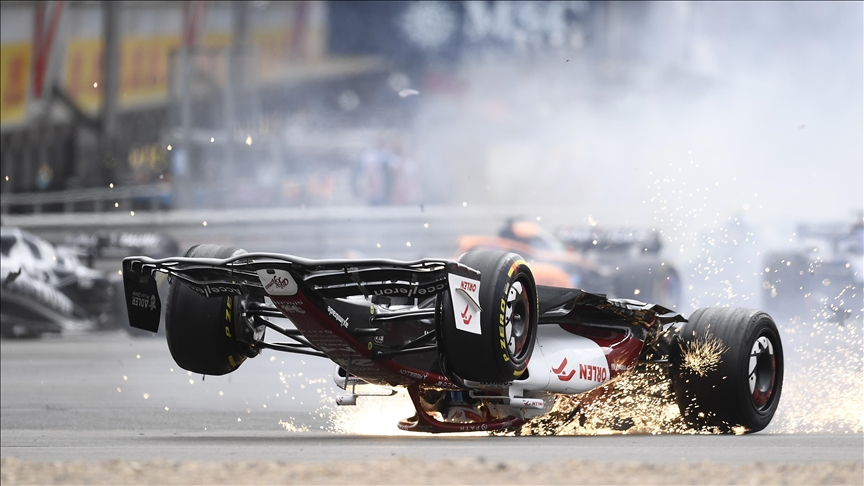 Sitting at the end of my seat, I couldn’t peel my eyes away as I and millions of other Formula One fans watched the race at Silverstone on Sunday.

The race was meant to be interesting after the drama that unfolded in 2021 when Hamilton went off track in the first lap.

As the drivers entered their first corner of the first lap, Mercedes’ George Russell and Alpha Tauri’s Pierre Gasly collided, clipping Zhou Guanyu’s car, leading him to flip over and skid at 200km towards the barrier before flipping over and crashing into the barriers. It then flipped once more and got stuck between the barriers and the spectator fence.

The drivers were then shown a red flag as per regulations and pulled into the pits, where we then saw that numerous cars were affected by the race. Alex Albon, Esteban Ocon, Sebastian Vettel, and Yuki Tsunoda were also involved in a separate incident. Albon was immediately taken to the medical centre for evaluation.

As spectators were waiting in anticipation, broadcasters were not allowed to show the footage of Guanyu’s crash in case the driver ended up severely injured. A resemblance to Ayrton Senna’s incident in 1994 in which he died after a major crash.

Once the doctor had examined Guanyu from outside the vehicle and deemed it safe for extrication, the Alpha Romeo driver was removed from the vehicle, and taken by ambulance to the medical centre.

How did Guanyu get so lucky? In 2018 the FIA introduced a new mandatory feature to all cars called Halo.

This feature is a wishbone-shaped carbon fibre-covered frame that goes around the driver’s head. Its function is to prevent flying debris (or other cars, such as Verstappen’s landing above Hamilton’s vehicle at the Italian Grand Prix in 2021) or decapitation (a near case for former driver Romain Grosjean). It had gone through multitudes of criticism upon its introduction as many thought it to lack aesthetics, as well as the fact that it may have been affecting drivers’ capabilities, which was later disproved.

After its introduction, however, many praised the halo after having saved numerous drivers throughout many races, including Alonso in 2018, Grosjean in 2020, and Hamilton in 2021.

Zhou Guanyu described his accident saying: “Once I stopped I didn’t know where I was because I was upside down, and the next thing I felt was some leaking,” Zhou said. “I was not sure if it was from my body or the car, so I just tried to switch the engine off. I knew if a fire started, it would be difficult to get out. “It wasn’t hurting, but it was very cold on the left-hand side, so I didn’t know if it was blood, and I wasn’t feeling any more or something. I was just making sure, I was more worried about if the engine caught on fire because, in that position, you are stuck.”

Unfortunately, investigations into the incident must be made in Alpha Romeo’s testing unit as the Halo is only meant to be a backup safety feature after the roll hoop in a case where the car is flipped over. The roll hoop is a feature situated at the back of the driver’s head made to keep the car at an angle when flipped over to protect the driver’s head. In Sunday’s crash, it appeared the roll hoop was missing while Guanyu’s vehicle slid across the gravel. Guanyu posted on Instagram saying he is “ok, all clear.” And that the Halo saved him.