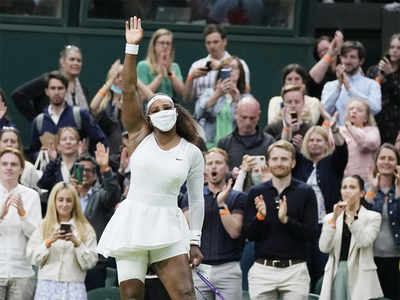 Legendary Tennis player Serena Williams had to opt-out of Wimbledon on Tuesday as her last match, which created a record in itself. The match, which could have been her 24th Grand Slam Singles, ended with her getting injured.

The World No. 6 player, who is also a seven-time Wimbledon champion, was in immense pain while playing on the slippery court, and asked for help in the first round. The score read 3-2 against Belarusian player Aliaksandra Sasnovich.

Serena returned after a long break but was quite unhappy.

Her injury started quite dramatically. Williams started playing the match with a limp in her right thigh. She knelt on the grass crying and was later helped off the court.

She shared a post on her Instagram account in which she said, "It was heartbreaking to see myself withdraw from today's match after injuring my right leg. I love my fans and I am filled with nothing but gratitude for my team, who ensure that the court is set before the match begins. When I got injured and returned to the court, the love and support that I received from the crowd, meant a lot to me."

Now let's analyze how the other players reacted.

William’s opponent Sasnovich decided to practice her serve, to pass her time when Williams was getting treated for her injury and was quite surprised when a player like Serena, who has never exited the first round in her 19 outings, had to leave the court.

During a recent interview with Times of India, she said, “I feel bad for Serena. She is the World champion. It can happen sometimes.”

Another stalwart player, Roger Federer, who is also an eight times Men's Singles Champion, was surprised and showed his displeasure at Serena's exit. He raised issues about the surface of the court, on a rainy afternoon.

Federer’s opponent, French tennis player Adrian Mannarino, also injured his knee, after the first round by slipping in the match before Williams.

Speaking about the same, during a recent interview with the Times of India, Federer said, "It is slightly more slippery and probably when it's under the roof. I think it's my gut feeling which says that you have to tread cautiously when you go out there and you will fall if you move in the wrong direction. Usually, during the first two rounds, the grass is more slippery. It is more tender. When the match goes on, it gets harder and becomes easy to play on.”

Serena has been in a total of four final matches in the Wimbledon tournament, but to equal Margaret Court's record to claim 24 Grand Slam Singles titles has been put on a hold, in which her last appearance was in Australia in 2017.

During a recent interview with the Times of India, Coco Gauff said, "It was really difficult for me to watch. I started playing tennis because of her. It's tough to watch any player getting hurt, especially her."

Federer was fortunate enough to have survived a big Wimbledon match on Tuesday, as his French opponent Adrian Mannarino got injured during the start of the fifth set of the first round.

Federer, who is an eight-time champion at the Wimbledon, was at a par score with Mannarino as the scores of the match were 6-4,6-7, 3/7, 3-6, 6-2 and that's when Mannarino decided to quit when there was just one point left in the deciding round.

It was Mannarino’s 33rd birthday and on the same day, he got injured during the seventh game of the fourth set.

He took the treatment but was unable to move and finally decided to retire from the match.

During the same interview, Federer said, “It’s really painful and shows that how one shot could have changed the result of the match, season and I wish him a speedy recovery and hope that we see a lot of him soon. He played better than me and he could have won, but I was fortunate enough.”