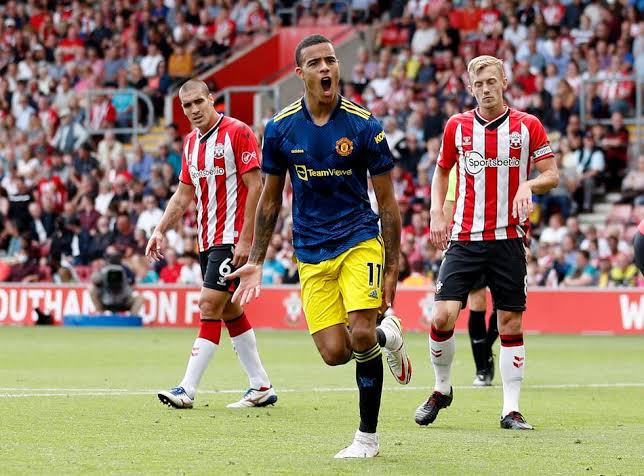 A reality check for Manchester United as The Red Devils was stopped in the tracks of their second fixture. In comparison to their opening day heroics, Manchester United failed to live up to their previous performance. In contrast to their opening match, United was sloppy, slow, and gave away the ball cheaply instead of maintaining possession. Matic, Fred, and Maguire invited turmoil on numerous occurrences. Southampton players were quick to capitalize on any loose pass or massive touch.

After hefty opening minutes, Manchester United started the game with the same intent and urgency to score an early goal. Martial came close to open the account from a Bruno freekick only to be denied by the post and by Salisu on the line. Moments later Pogba failed to keep his header on target from a Shaw freekick. United was dangerous on set pieces before their dominance went into vain. Stephens came in hard on Bruno to take away the ball. As Bruno screamed in dismay Armstrong gently slipped the ball into the path of Che Adams. The Scottish striker on his weak foot found a huge deflection from the dwindling leg of Fred to open their account.

Southampton acquired their lost confidence to force United back to their half. Threatening through the channels on the wings, forcing the full-backs to stay back instead of invading their half brought the game back to par.

Southampton brought in the same intensity as they went into the second half. The Red Devils once again started to bring in more attacking depositories to stave off their opponents from completely walking away with the game. Bruno Pogba linked up into the box with a quick one-two to create more space for their players. Pogba found Greenwood with a cheeky little backheel who managed to slip a pass through the legs of the defender and the keeper.

United rallied up their squadron to complete their comeback. McCarthy made sure to prevent his team from trailing. In the final quarter, a single mistake from Maguire took away the sting in United’s attack. Maguire unaware of his surroundings allowed Adams to take away the ball from his feet to slip it to Armstrong. One on one with De Gea, Armstrong went for power instead of placing it. Keeping his cool De Gea went down quickly to keep the score level.

Manchester United’s form stumbled early into their long journey. Southampton could have won the game as Armstrong missed out on a chance which was waiting to find the back of the net. The side from Saint Mary was happy to take on a draw after being vexed by last season’s turnaround. Manchester United will take a trip to Molineux to face the Wolves, while Southampton will host West Ham next week.