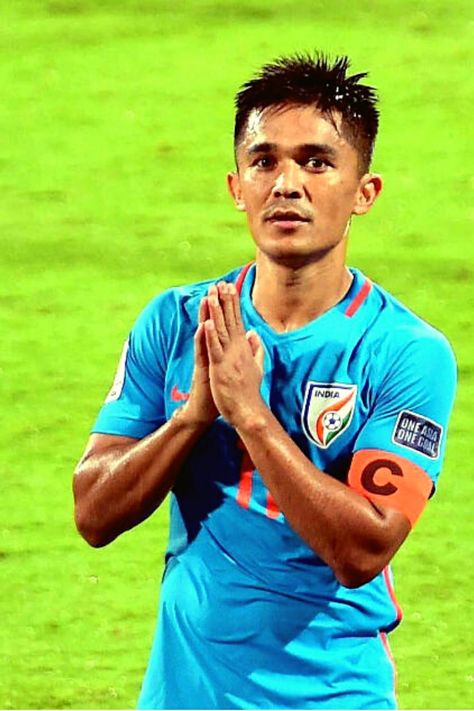 India’s most celebrated footballer Sunil Chhetri reached an extensive milestone in his career. He surpasses Argentina’s forward Lionel Messi's tally of 72 international goals on Monday. This he did, after netting a brace against Bangladesh in a joint qualifier of Asian cup 2023 and world cup 2022 at the Jassim bin Hammad stadium in Doha, Qatar. this was Sunil’s 74th goal for India. He scored at the 79th and the 92 minutes to lead the blues to victory.

After the victory, he said, "To win Keycap digit three points, win a full game is sweet! I am happy that we also kept a clean sheet. To this, the official handle of the FIFA world cup responded, “He's now got more than Messi! Sunil Chhetri’s double earns the Blue Tigers a 2-0 win in #WCQ and moves him on to 74 international goals – above Lionel Messi and one-off entering world football’s all-time top scorer” this is a welcoming opportunity for Chhetri, who is 36 and looking to extend his record against Messi who will face Brazil in Copa America on June 13 Ali Makbout of UAE sits at 4th spot with 64 goals.

Chhetri is now the 2nd highest active goal scorer on the international stage with 74 goals, only behind Portuguese legend Cristiano Ronaldo, who has a score of 104 goals at international, goals. In terms of all-time goal-scoring, Sunil Chhetri currently sits at the 11th spot, only behind   Hungary's Sandor Kocsis, Japan's Kunishige Kamamoto, and Kuwait's Bashar Abdullah, who all have scored, 75 goals. He is just a goal away from entering the top 10 list.

This was a crucial victory for the Indian national football team as they recorded their first win in six years in FIFA world cup qualifiers. Second-half substitute Aashiqui Kurunyan crossed the ball to Chhetri from the left-hand side, who gently headed the ball in the net, Chhetri scored again in injury time with a ball from Suresh Singh from the right flank. Bangladesh pressed hard for an equalizer but could not find one. It turned out to be an easy victory for India in otherwise a terrible campaign for team India in qualifying for the world cup in Qatar 2022.so far Indian football team has lost against Qatar and Oman only, winning against Bangladesh. All the matches are played in Qatar.

President of the AIFF (All India football federation), Praful Patel congratulated the Indian captain Sunil Chhetri, and the rest of the team, via a series of tweets. “Our @IndianFootball skipper Sunil Chhetri adds another feather to his illustrious cap as he overtook Lionel Messi to become the second-highest active international goal scorer with 74 goals. A big congratulations to Captain Fantastic & wishing him many more accolades in the future." Another tweet congratulating the entire team saying, "Congratulations #BlueTigers on an awesome win over Bangladesh today & fabulous performance by skipper @chetrisunil11 who lead from the front & paved the path to victory. Your hard work & determination was visible on the field.

What I am proud of is the fact that I have played over 100 games for the country,” he added when asked about his mantra of success, he said. There are only two mantras for strikers — more games and hard work. In the next 10-20 years, there will be many players, who will be scoring goals better than me. If you keep getting players like me, we will be where we are. We will get better players, and we will be better,” he also said that he wants the Indian football team to play a more passing game. I need the team to be a little bit brave with the ball. I think we understand defense, diet, and how to take care of ourselves. But many people do not like that we do not keep the ball, and I feel the same way.

“I also want to see my team pass more. I like passing and moving more than any other system. It means you run less and get more 1v1 opportunities and more chances.” He said

This win brings India to third place in Group E, earning six points from seven games, which means that India is already out of the world cup in Qatar in 2022. But still has a chance of making it to the Asian cup in china, and India will next face qualifiers against  Afghanistan at the same venue on June 15. Chhetri also surpassed the record of IM Vijayan for scoring most goals for India during wins at world cup qualifiers. After making his debut against Pakistan in2004, Chhetri scored his first goal against Cambodia in 2007 and has scored 74 times in 117 appearances for India

Football which the most popular sport on the planet, has a massive fan following in India, however, according to Chhetri Indian football team does not receive the attention as it should seeing this lack of support Chhetri came out with an emotional appeal to the fans in 2018 where he asked the fans to come to stadiums with large numbers an support the team, cheer for them even abuse them if the need be.

According to top football experts like former Arsenal manager Arsene Wenger, India has a colossal footballing it can only realize it by building good infrastructure for football. In recent years with the establishment Indian super league, many global footballing icons have been coming to India like Alessandro del Piero, Roberto Carlos, Luis Garcia, and Nicolas Anelka. Chhetri's accomplishment is a proud moment for India and questions why India lags in football compared to other big football houses like Germany, Italy, and brazil.