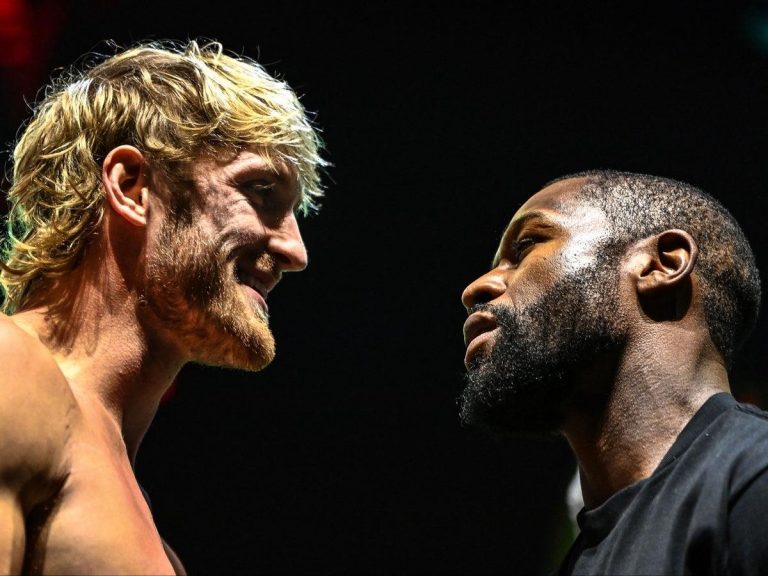 Money-making business showcased as an exhibition match between Logan Paul, age 26, the YouTuber who went through some of the most significant controversies in YouTube history, and Floyd Mayweather, age 44, also known as the Floyd Money Mayweather, the undefeated boxer with the record of 50 wins. The match had taken place in the HardRock Stadium in Miami, the United States, on 6th June 2021

Mayweather was already a world champion in this field. Logan Paul decided to fight him for his reputation and chase his dream of being the biggest entertainer in the world. For Mayweather, it was about money-making and his ego. Both the fighter have been preparing for months for this fight as it became personal to both of them.

The first press conference took place in Peurto Rico, where Mayweather got extra confident and said, “I could fight two fighters in one night”, where he pointed out his fingers to Jake Paul, Logan Paul’s younger brother, and challenged him to a fight.

Harsh words were exchanged by both the fighters. Pictures of them staring at each other went viral on Twitter and Instagram. At the end of the first press conference, Jake Paul came into a massive fight with Mayweather as he ran away with his cap. Jake and Mayweather got into a fight where Logan wanted to jump in but could not because of the security.

The second press conference was to weigh both the fighters. Logan Paul weighs in first and comes in at ripped 189.5 pounds. He pumps his fist in the air in excitement. The undefeated world champion comes in next and weighs 155 pounds, and looks in tremendous shape. Both the fighters look fit and strong.

The show commenced with Badou Jack going against Dervin Colina, Jarrett Hurd VS Luis Arias, and Chadd Jhonson VS Brian Maxwell on the fight day.

Logan Paul comes in first in his yellow suit with a Charmander (Pokemon) gold card chain on his neck. Looks confident and more robust than he was in his previous match against KSI. Floyd Mayweather enters in his alligator suit with his Money anthem playing in the background. He was saving energy for the match, so he did not show off much.

Round 1:  Paul smiles before a single punch is thrown. They’re just feeling each other out in the first 45 seconds. Paul was flicking out punches, Mayweather staying out of range. Paul scores one to the body. He has his hands low as Mayweather circles. Mayweather ducks a punch and tags Paul, to the body after they break a clinch. Quick left hand by Mayweather. Mayweather jabs Paul. Paul sneaks in a shot to the body. Paul starts winging big hooks as Mayweather turtles up. There’s the round one bell.

Round 2: Paul sticks with the punch, but he can’t quite connect. Mayweather with a couple of hard body shots. Paul was staying busy even if he’s not landing anything. Paul scores with a jab. Mayweather with a smirk on his face. He’s slipping punches but not throwing much back. It looks like he was saving energy. Now a body shot by Mayweather. Mayweather blocks Paul’s counter. And the bell rings for round two.

Round 3: Paul was soaked in sweat at the opening of round three. He wants to land something big. Mayweather’s defense was holding steady. Tired-looking Paul is wrapping Mayweather up now, referee warning both guys to keep it clean as they engage in some dirty boxing off of a clinch. Short uppercut scores for Paul as they keep getting tied up. Mayweather with a lot of exaggerated movement. Right hand to the chin by Mayweather. Mayweather lands a couple of good body shots as Paul goes to lean on him. Paul with a lead right hand, but he walks right into a counter. Paul is looking slow as we head to the fourth. That’s the end of round 3.

Round 4: Mayweather is in a rhythm now, and Paul is firing wild. Lead left hook by Mayweather. Hard right from Paul, but a vintage Mayweather shoulder roll deflects it. Paul was trying to keep him back with a jab. Paul whiffs on an uppercut. Counter right hits Paul. Paul is gassed. Mayweather saw everything as he walks Paul down. And round 4 ends.

Round 5: Paul’s shots hitting gloves. Mayweather steps in and scores with a left hook. A suitable hook lands that push Paul up against the ropes. Paul was staying busy. Lead right for Mayweather. Mayweather hits a shot to the body, and Paul is very slow to straighten up. Big counter uppercut by Mayweather. Paul is in full retreat. It was Mayweather’s round.

Round 7: Plenty of clinching by both Paul and in the first minute of the seventh. Mayweather punches the body. They grapple, and Mayweather just bullies Paul against the ropes, pushing Paul’s head back. Jab by Paul. Paul ducks right into short left. Seventh-round felt like it lasted for few seconds.

Round 8: Everyone expecting and knockout in the final round. The crowd gets restless as Paul initiates a clinch. Lead left hook lands again for Mayweather. More holding from Paul and separated with a minute to go. Paul goes low, then up top, neither punch lands. Mayweather tags Paul with a check left hook. He scores with another left hook. Paul points to the clock and tries to catch Mayweather off-guard. All smiles as the fight come to a close. And the much-awaited Logan Paul VS Floyd Mayweather was ending in a nutshell.

As this was an Exhibition Match, there will be no winner, but according to the crowd, Mayweather takes the win. Everyone appreciates Logan to be a tough fight and stands with hope throughout the match. Mayweather must have won the match, but it was a big win for Logan Paul and YouTube. Post- Fight, Logan Paul said that for him, he won, and it was an achievement to stand against the world’s best boxer of this generation.