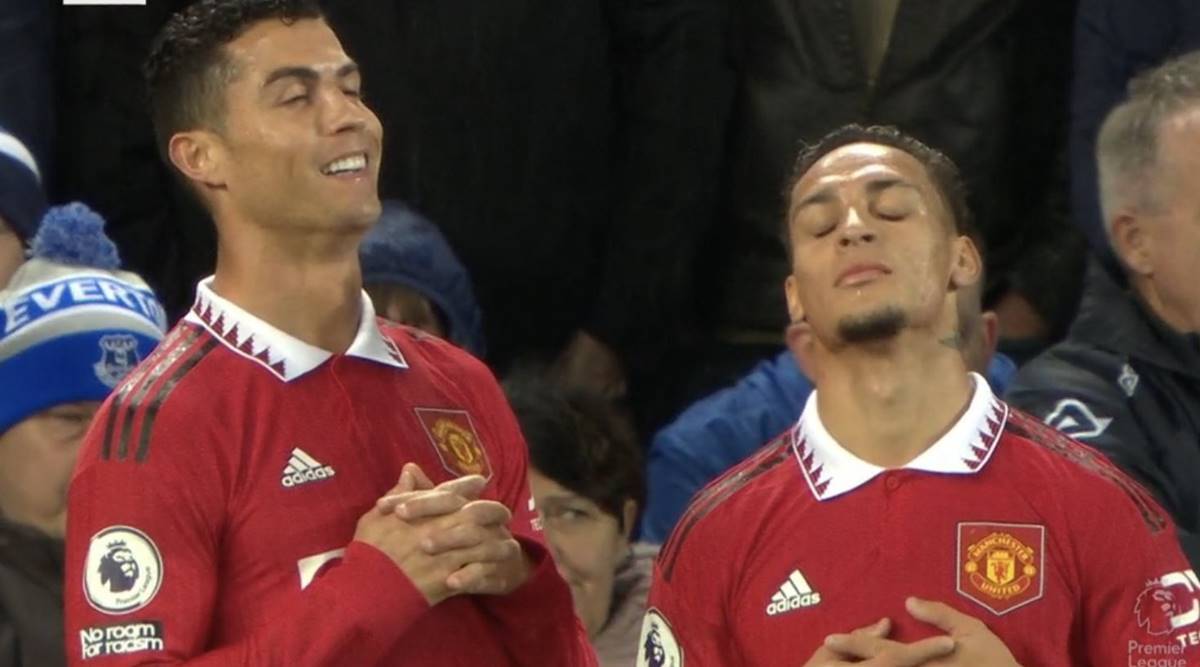 Manchester United defeated Everton 2-1 in their latest PL outing at Goodison park on Sunday. After equalizing via an Antony goal, Martial got another injury and was replaced by an under-fire Cristiano Ronaldo. And up stepped the veteran, notching up his 700th club career goal with a left-footed finish on the counter. The goal went on to secure all three points for United. And there was an immense outpouring of support and appreciation for the legend after getting another landmark goal, making one almost forget the flak he had been receiving after United’s mid-week outing.  The Red Devils defeated Omonia 3-2 in their Europa League encounter on Thursday. The match was another lackluster performance from the United side after the 6-3 drubbing they received from cross-city rivals Manchester City. Though the focus was on United’s torrid defense conceding 2 goals against minnows, the lion’s share of the limelight was on the missed chances. More importantly, the missed chances by one name, in particular, Cristiano Ronaldo.

Cristiano Ronaldo had a total of eight shots against Omonia. Half of them would have been buried by the Ronaldo of 7 months back. The horror miss was a tap-in, which also came off the post. His luck in front of the goal reflects the season he is having. One goal in nine games, only four starts, the circus around his transfer, and speculations about his relationship with United manager Eric Ten Hag are pretty much the highlights of his season till now. The main reason cited by pundits for his poor form is his age, which to an extent, may be true. Ronaldo turns 38 in the coming February. He is on the wrong side of 30 and his powers will thus, continue to dwindle. However, considering age as the only reason for his struggles might run the risk of oversimplifying an argument that has several complex layers attached to it.

Cristiano wanted to leave United this season. To force a move, he missed the whole pre-season tour, which is critical for match fitness ahead of a grueling premier league fixture list. The last time he did that was in his last season at Real Madrid in 2017-18. He scored one goal in his first eight starts for Madrid that season. However, the second half of the season was something to behold. He racked up a total of 43 goals and 9 assists by the end of the campaign, ultimately winning the UEFA Champions League and the European Player of The Year.

Another factor to consider is his long-drawn transfer saga. The closing weeks of the transfer window saw reports coming from trusted sources such as The Athletic that Ronaldo had isolated himself in the dressing room to make his intentions of leaving clear to the United board. This, coupled with the fact that Ronaldo was already expected to need some time to adjust to the demands of the new manager’s philosophy, meant Ten Hag benched him to send out a message. With already a non-existent pre-season, the lack of game time at the start of the season delayed his race to full fitness and more importantly, his confidence even further.

It's a fact that Ronaldo is not naturally a typical Ten Hag center forward. High pressing from that part of the pitch is a central part of the Dutchman’s philosophy and let alone at 37, Ronaldo was never known for his defensive contributions. However, if there was one thing to take away from Ronaldo’s showing against Omonia, it was his overall game. Ronaldo played a decent game, very much akin to what Ten Hag demands. He was the United player with the most presses, dropped between the lines, linked up the play, and was quick on the turn.  Apart from his scuffed shot that resulted in Rashford’s second goal, he was instrumental in taking away a defender with his diagonal run and creating space for the shot.

Ronaldo’s overall game against Omonia showed that, perhaps, it’s not age that led to his horrors in front of the goal. It’s his confidence. It is not surprising that he may be feeling the heat, with his reduced play time, constant media scrutiny, and uncertainty about his future a lot for even the mighty CR7 to contend.

That’s not to say that time won’t take its toll. But Ronaldo was the third-highest scorer in the league last season with 18 goals and 24 in all competitions for his club. What makes this stat even more impressive is the fact he had an xG(expected goals) of 17.21. What it means is that he scored almost a goal more than what was expected of him based on the number of chances his team created. Considering Manchester United only finished a dismal sixth last season, one wonders how much better Ronaldo would have done in a stable attacking setup possessed by the likes of Manchester City or Chelsea. Moreover, even time isn’t so cruel to create such a dip in form within the space of just six months. With someone of his fitness level, there is still something left in the tank for taking out at least one good season.

Here lies Ten Hag’s conundrum. Does he tweak his system and give Cristiano Ronaldo the required game time to regain his world-class form of last season, or play his already set starting line-up with Martial upfront? In the case of the former, which can likely be the scenario with Martial’s latest injury, he runs the risk of missed chances for a couple of games until Ronaldo gets his flow back. The reward is, if he does get it back, Ten Hag will have a player who at 37 is still one of the best goal-scorers around. However, Ronaldo could leave United as early as January. Thus, catering to him at the cost of the team when he won’t even be around to pay back the dividends doesn’t seem the most agreeable idea. But what seems apparent is that it’s a tad bit unfair to judge one of the greatest players ever and his future in the game based on a season that has been different for him in more ways than one.