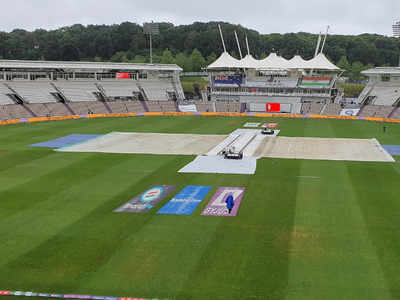 The weather conditions in Southampton are not looking nice, as the play stands to get disrupted, on the first day of the WTC Final. The game will be between India and New Zealand.

The UK Met department and many weather forecasts have said that there would be long spells of heavy rain and thunderous rain on Day 1.

The biggest reason for worry is that heavy rain is expected across all five days in Southampton. Even on the sixth day, rains will fall, which the ICC has kept as a reserve day to tackle the bad weather conditions. On the other hand, a massive amount of time is wasted due to rains, keeping a day extra is not enough for a big-ticket match like this.

Both the teams have been practicing in Southampton for the last couple of days.

The playing XI for the Indian Cricket team was announced last night.

Both the teams are going to share the trophy if the match is tied.

The squad of the Indian cricket team has been given below:

Last year, during India’s tour of New Zealand, an image of Virat Kohli and Kane Williamson had emerged, which showed the friendship between the two opponent captains and described as one of the best pictures in the cricketing world.

Both captains started their cricketing career together back in 2008 when they played in the U-19 Cricket World Cup for their respective teams. During those days, there were being referred to as the future stars, and both of them have scored 7000 runs, their career paths have grown past each other.

The camaraderie shared between them is evident. Virat has always mentioned that he loved the way how Kane thinks while approaching a particular match. Both of them possess contrasting personalities. While Kohli on the one hand, gives an image of a streetfighter who gives out the vibe of "in-your-face moment", and on the other hand, Williamson presents the "the nice boys" image of the world cricket.

Come June 18, the two captains would be leading their respective teams in the World Test Championship (WTC) Final. Kohli would want to win the ICC Trophy since he became a captain, India, has not won any ICC tournament. And Williamson would need to end his side’s streak of hunting for a World title.

During a recent interview with The Times of India ahead of the match, Williamson said, "We don't want to color this match as a war-like situation. Virat is a good friend, and this Indian side is strong."

During a press conference on the eve of the final match, Kohli said, “Kane and I have become good friends over the last few years, having played against each other. We have had conversations off the field. We have stayed in touch. There are positive vibes between us, and we respect each other a lot.”

The camaraderie between the two is just off the field. When the game starts, the game face always takes over. Kohli further mentioned, “The bond that we shared only happens off the field. But when you come out on the field to play, it becomes all about the opponent you are playing against. We are professional cricketers. We would be looking for opportunities to getting him and all the other New Zealand batsmen out. And I know they would be doing the same thing. We look at them as opponents, and we will try to win the match."

The approach of the Indian Cricket team has often been described as ultra-aggressive. The players like to get into the minds of their opponents. This act has become a trend amongst them in the past few years. It can become challenging for them to play this kind of cricket especially, against a team that doesn't indulge in side-chatter in the world of cricket.

Kohli is quite confident about the brand of cricket that his team plays and is not going to let the “niceness” break the team’s intent.

Now let us understand that why it is crucial to have a “world test championship.

. The test cricket was going through an existential crisis, and the biggest reason could be the ever-expanding T20 format.

. The first-ever "so-called" test championship was played in 1912 between England, South Africa, and Australia, in what was called a triangular tournament, which did not have a world title attached to it.

Is there a tussle going in between BCCI, team, and selectors for choosing a replacement opener ahead of the India-England series?