WWE Launches The Search For A Next African Superstar 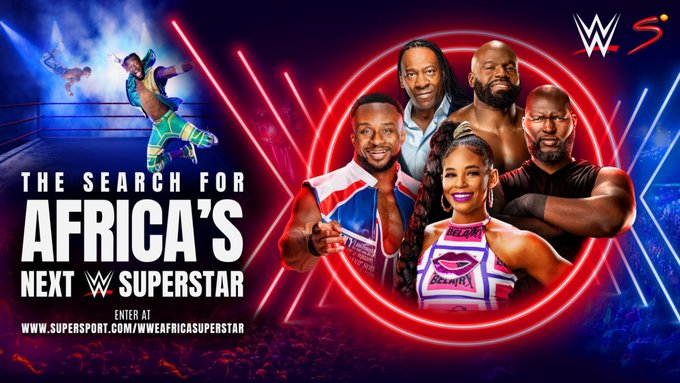 WWE continues to open doors for people who dream of being the next superstars. We have seen many superstars coming from humble beginnings and have become icons of the industry. The likes of Ghanaian-American professional wrestler Kofi Kingston, Nigeria’s Apollo Crews, and Tolulope ‘Jordan’ Omogbehin, famously known as Omos, Egypt’s Konga, South Africa’s Adam Rose, and Justin Gabriel.

The franchise is looking for the next African superstar that will lighten the world’s stage. WWE, in conjunction with its Sub-Saharan African broadcast partner SuperSport, has announced a continent-wide talent search to find the next WWE African Superstar.

The host city will be Lagos, Nigeria, and they will hold a multi-day tryout in February 2023. It has been announced that interested candidates will have to submit a video highlighting their potential to become a WWE superstar, and submissions will be accepted until 18 December 2022.

A selected number of tryout participants will be awarded an all-expenses-paid experience to continue their tryout journey alongside current and prospective WWE Superstars ahead of WrestleMania 39 in Los angles to be the top-performing participants who will then begin their new career at the world-class WWE Performance Center in Orlando, Florida.

WWE head of Talent Operations and Strategy, James Kimball, has said that focusing on the African continent is very pivotal to growing the franchise. It allows vitality and diversity within the WWE corporation.

“Africa is a focal point of our renewed global talent recruitment strategy. This initiative in Lagos will launch what we envision becoming a year-round, multi-country effort to cultivate relationships and identify talent that will resonate with our passionate and loyal African Fan base,” said Kimball.

SuperSport is arguably the largest broadcaster in the African continent, and they are excited to have the opportunity to continue showcasing WWE fights. SuperSport and WWE extended their partnership in 2019, and it was reported that over 50 countries watch WWE programs. The Chief Executive of SuperSport, Marc Jury, believes this will broadly impact the African continent positively as Africans continue to monitor their fellow Africans on an African broadcaster.

“The continent abounds with Athletes, and Africa has had several WWE Superstars, so this is the perfect opportunity to showcase fresh new talent,” said the Jury.

“As there is a massive appetite among African audiences for WWE action and entertainment, we expect this initiative to be very popular with aspirants. SuperSport looks forward to telling this exciting story in the coming weeks and months.

Showmax viewers will enjoy the luxury of watching matchups and also WrestleMania, as WWE and Multichoice also announced a significant broadcast partnership that will see Showmax, one of the leading streaming services that are available in the region, becoming the new home of WWE Network in Africa. The partnership incorporates all WWE premium, Live Events, and WWE Network’s vast library of original and archived programming available to stream on demand by African citizens from 2023.