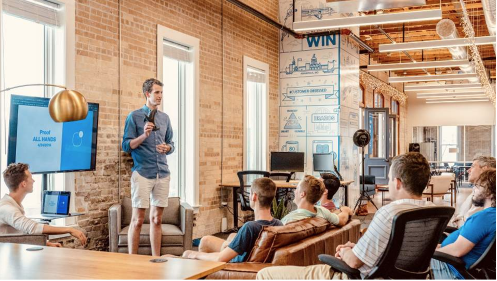 VR has been popularly discussed in the high-tech industry, but its technologies are still vague and challenged with their maturity and practicality in real-world scenarios. Blank Li’s ‘Le Bal Del Paris’ will upend the public view on and ultimately unfold possibilities in VR with its multi-sensory virtual construct.

Following the recent advent of new technological advancements and digitally constructed spaces in new media, they seem to continuously prove to us the limitless possibilities that come with technology on the threshold of human imagination. One such prominent phenomenon could be recalled back to Meta(previously named Facebook) CEO Mark Zuckerberg’s lightning announcement last year about the incredible and thrilling world of Metaverse.

As Zuckerburg’s introduction implies, the Metaverse will construct an all-inclusive, virtual space that ‘let you socialize, learn, collaborate, and play in ways that go beyond what we can imagine.’ It is coined as a revolutionary change in the history of social communications, taking humans on a magnificent leap into a mass social media construct built upon the ideas of virtual reality. In this virtual world, social connections are pushed forward to the next level of advancement. People can be whatever they vision themselves as and connect with friends in an undistracted 3D dimensional space embodied by the art of creative imagination.

Since news about the Metaverse as a practical reality to imagine is rigidly confirmed by Zuckerberg, the world is suddenly swept into a wave of wild excitement and confusion over this seemingly dreamlike conception. As one witnessed, globally influential corporations such as Microsoft, Apple, Google, Amazon, and Netflix make a rapid move to strengthen their foothold in Metaverse with their own distinct VR and AR integrated approaches to gaming and entertainment. The fashion industry preserves a unique aura shown in its sophisticated strategic progressions to facilitate brand awareness through the abrupt freshness of VR technologies. However, the feasibility of the Metaverse in terms of its authenticity and functionality is placed under critical scrutiny, with specific numbers of professionals raising a dubious questioning of the anticipated virtual reality.

The criticisms point to the constructive design of Metaverse, which UCL academics in Built Environment, Luke Pearson and Sandra Youkhana noted, “Zuckerberg’s metaverse world acts more like a desktop background than a considered, spatial environment.” It looks like Zuckerberg’s Metaverse is slightly deviated, in design ideas of the virtual construct, from the structure and shape of an actual built environment. This questions Metaverse’s ability to attract users when the design is perceptibly flawed.

Following the discussion of industrial endeavors in fashion targeting the Metaverse, Chanel’s enchanting collaboration with Spanish choreographer Blanca Li’s Le Bal de Paris show at the Barbican Center in London is set to overturn that critique concerning VR’s spatial authenticity and delicacy. Le Bal de Paris presents a visceral virtual experience that incorporates VR technology into dance and musical performances, inviting professional dancers and active participants to come together in a lavish, extraordinary Parisian ball constructed through the application of the VR headset.

As the dancers and participants are swirled into a virtual world impossibly dazzling and authentically refined in style, they turn into elegant figures hidden by various animal masks. Their avatars are sublimated to an encapsulated state of beauty and luxury as they appear individually dressed in Chanel’s globally renowned couture. The show was an outstanding achievement in creatively blending the art of music and dance with the complex machinery of VR technology while unlocking fashion’s role in the Metaverse with the embroidery of Chanel’s simple and elegant costumes.

Classic Chanel never fades in time. The beauty of timelessness in its classic designs is manifested even more forcibly with sensational shock coming from the attendees multi-sensory experience in a virtual fashion. Chanel historically found its roots in performance, which one could historically recall Gabrielle Chanel’s experience as a patron of Serge Diaghilev, founder of Ballet Russes company in 20th-century society. Later on, she participated in designing multiple costumes for ballet performances with prominent figures such as Vaslav Nijinsky and Serge Lifar. Its artistic richness and distinctiveness in designing outfits that complement the unwavering delicacy of ballet made Chanel the perfect brand couture for Li’s fantastic show. As Li asserted, Chanel ‘has a timeless elegance and audacious identity,’ which speaks to the show’s core concept.

Indeed, Le Bal de Paris breaks the pre-conceived boundary of choreographic performance by transporting Li’s bold imagination into reality, accomplished by placing human interaction into the core principle of a virtual performative space. Looking at the technology embedded in the complex networks of Le Bal de Paris’s virtual space, one couldn’t help but sigh in astonishment and disbelief over the show’s tremendous scale and grand virtual construct.

What distinguishes Li’s show from other VR-based performances is that it emphasizes the attendee’s sensory experience in all aspects of entertainment by enhancing their full-body awareness of the luxurious virtual expanse. Upon immediate entry into the show’s imaginative construct, the attendees’ are treated like real-world beings and offered cognitive experiences in their environment. Incredibly realistic to the sense yet beautifully unreal as the avatars are thrust into an immersive experience streaming with pure enchantment and wonderment.

The entire journey was as if one resided in a glorious reverie; apart from the tech setups which involve the attachment of sensors to the head, wrist, and ankle, the rest felt like magic. As writer Lyndsey Winship conveyed her inexplicable thrill, ‘it’s like stepping into a Disney movie, absorbed into fantastical settings full of surprising reveals.’ The extravagant ballroom was overwhelmed with choreographed performers who engaged with the attendees intimately sentimentally. Their dance moves revealed a heart-wrenching melodrama akin to a Parisian romance.

Looking up to a sea of stars on a romantic Parisian night, the boat ride to the garden gates was great spiritual solace and satisfaction. Sensory enhancements are managed at a level of remarkable sophistication with a sensitive closeness to what one feels and smells. While one noticed the soft and comforting brush of wind passing by, the smell of blooming roses left one loosened to the feel of tenderness. Swiftly transporting to “Mimi’s” nightclub on the streets of Paris, the attendees end the spectacular experience in the remaining echoes of Jazz and Cancan dancing.

Le Bal de Paris won the Lion award for Best VR Experience at the 78th Venice Film Festival. One could suppose Li’s success lies in her creative and persevering mindset to integrate art, fashion, and technology into one collaborative project to showcase the possibility of turning absurd dance imaginations into an exquisite vision of VR deliberately natural to the human body. In a conclusive address to her unprecedented show, Li expressed her resolve to explore previously unheard or unrecognized options of dance performance carried out in the imaginative space of VR:

“I like the idea of doing things that could not ever have been done before. To say: two to three years ago, this was impossible. But today, we can do it.’

Eminently, Blank Li serves as a role model in pushing VR technology to practical use, further unfolding a hopeful pathway where fashion meets the unlocked power of virtual constructs.