The future of the Internet has only just begun.. 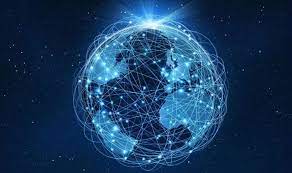 Amazon has almost no stores, Uber has almost no cars, Facebook creates no content, Alibaba has no inventory, Airbnb owns no real estate, bitcoin has no physical coins and Netflix is not a TV channel. Some of the world's most well-known firms operate solely through the Internet and have grown their business by more than 40% in recent years. The Internet has truly changed the world and continues to do so.

The Internet has turned our world. We use the Internet in practically every aspect of our lives. Ordering pizza, purchasing something online, sharing a moment with our friends, and sending a photo over instant messaging are just a few examples. The Internet has undergone an immense and incredible transformation. It began as a static network designed to transport a small amount of data or a short message between two terminals, and from that, it evolved into a repository of data where the material was produced and maintained only by skilled coders. Today, however, huge quantities of information are posted and downloaded through this electronic leviathan, and the content is very much our own, for today we are all commentators, publishers, and creators.

The Internet expanded its scope in the 1980s and 1990s to include the IT capabilities of universities and research institutes, as well as public agencies, institutions, and commercial businesses from around the world. The Internet grew enormously; it was no longer a government-run project, but the world's largest computer network, with over 50,000 sub-networks, 4 million systems, and 70 million users. The advent of social media and other interactive, crowd-based communication tools was fueled by the birth of web 2.0 in the first decade of the twenty-first century, which was itself a revolution in the brief history of the Internet.

The Internet had evolved from a simple means of exchanging information to a sophisticated multidisciplinary tool that allowed people to produce content, engage with one another, and even escape reality. Today, we can transport data from one end of the world to the other in a matter of just seconds, give online presentations, live in parallel "virtual worlds," and share our real lives, our authentic identities, using photographs, video, voice, and text. In today’s era, personal stories are made public, and local issues become international. The advent of the Internet has spurred a discussion regarding the impact of online communication on social relationships too. It liberates us from geographical constraints and brings us together. The Internet is the medium through which we communicate with one another, and it brings with it not only privacy but security too. The Internet has transformed business, education, government, healthcare, and even how we communicate with anyone we want—it has become one of the most important forces of societal evolution.

The internet's rapid development has resulted in evident and major changes in our daily lives. The Internet's impact on society can be felt in practically every aspect of our lives, from beginning a business to promoting, expanding, reaching out to customers, and interacting. It has changed the way we communicate with one another, how we learn new things, and even how we share whatever we want with others all over the world. Society is currently racing to catch up with rapidly growing online technologies, resulting in a societal evolution that has influenced how we commemorate key life events. From our personal lives to something as major as starting a business, there's no doubting that the web has an impact on how we celebrate and share,

The Internet has altered how we organize, participate in, and document the most important areas of our lives in several ways. Some of them are:

From AltaVista, which debuted in the mid-1990s and was decommissioned in 2013, through Google, Yahoo, Baidu, and Bing, search engines allow users to type in whatever they want to learn more about. To locate the information we require, we can easily scan through billions of websites. The volume of requests handled by search engines is enormous, and Google.com is the most popular website on the internet.

Websites like Amazon, eBay, and Alibaba in China have aided in the move from street buying to shopping from the comfort of your own home.

Gone are the days when you had to wait days, weeks, or even months for a letter from a friend, family member, or business associate.

A variety of things, from oven gloves to groceries, laptops to cell phones, can now be ordered for home delivery, frequently the same day, with the click of a mouse or a simple voice command.

People nowadays use several social media sites, including Pinterest, Facebook, Twitter, Snapchat, Instagram, and LinkedIn. These websites have become many people's preferred medium for sharing their musings, images, videos, and much more in just a few years.

The Internet of things is beginning to have a greater impact on our daily lives. Consider gadgets that are both linked to the internet and capable of communicating with one another. Virtual assistants like Amazon's Alexa, Apple's Siri, and Google's Assistant are becoming increasingly popular in homes. They not only make life easier for us, but they also provide us with a sense of privacy and security.

Today's workplaces are a far cry from those of 15 or 20 years ago. Workers have almost instant access to the knowledge they need to conduct their jobs because of high-speed internet connections, and video conference meetings and presentations with colleagues on the other side of the world are typical. Computers are also utilized for a variety of additional functions, such as emailing, organizing meetings, and composing memos. Everything is done with the help of the internet, whether it is developing, storing information, transmitting, receiving, or communicating.

The internet and the web have revolutionized how individuals find love. People looking for "the one" are increasingly turning to algorithms rather than serendipity. Relationships, according to traditionalists, are devalued by the instantaneous nature of apps and websites. Advocates of online dating, on the other hand, argue that in an increasingly fragmented world, apps and websites make it easier to meet people. However, apps like Tinder, Bumble, and others are still very popular, especially among millennials.

The use of DVDs, CDs, and other physical media is decreasing as multimedia streaming via TVs, tablets, and smartphones becomes more popular. For example, Netflix today has more than 100 million subscribers, while Spotify has more than 70 million.

People all across the world may now use the internet to send money, pay bills, and set up recurring payments. People not only trust and utilize apps like Paytm, Google Pay, and others daily but they also feel safe while doing so.

The Internet revolution is not only technological; it also affects people on a personal level, as well as society as a whole. The Internet allows an infinite number of people to connect with one another in an unfettered and unrestricted manner. Bill Gates once remarked that the internet is becoming the town square of tomorrow's global village, and he wasn't incorrect; we can see how the internet has revolutionized our lives. There’s so much left to discover still. More opportunities, new benefits for individuals, attracting more people into the field, and collective well-being will form the future. Social media did not exist ten years ago and we can see where it stands now, similarly, something completely new will arise in the next ten years. Since its inception, the Internet has undergone enormous changes, and there is little doubt that it will continue to do so. The Internet's future has only just begun, and there will be many things that we will learn from, and eventually grow.