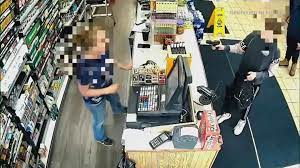 On the 1st of June, an unnamed 12-year-old boy took his grandfather’s handgun and entered a local gas station in Hartford, Michigan. According to reports, the boy waited patiently in queue as the man in front of him paid for gas.

When he reaches the front of the queue he whips out a 9mm handgun and flings his backpack onto the counter, demanding the cashier ‘put the money in the bag.’ When the cashier questions him, he fires a warning shot into the ceiling.

The cashier quickly empties the register and puts it into the bag and yells at the boy to get out. On his way out, he attempts to reload the gun but it jams and he calmly and casually walks out of the store, money in hand.

The Cashier, Jessica said: ‘He sounded way too calm… Part of me wanted to hold the kid because he has so many problems, then it's hard to feel bad when he did something like this.’

A 911 call was made just before 4pm on the 1st of June. The robbery took place at the Marathon gas station on East Main Street - just one block away from the police station. It took only minutes for Hartford Police Chief Tressa Beltran to pick the boy up.

On Thursday, 2nd of June, the boy was charged with armed robbery, assault with a dangerous weapon, and discharge of a firearm in Van Buren County Family Court on Thursday.

The grandfather, who is the child’s legal guardian, has no comments at this time. ‘No comment at this time, no pics.' He has written on his door 'I have to live in this town and I need some sleep.'

The boy is in custody at Allegan County Juvenile Centre and will remain there until his hearing, the date of which is unknown but predicted to be at the end of the month. Currently, no motive has been found for why the boy carried out the robbery.

Hartford Lt. Mike Prince said: ‘Every day I'm seeing something new at this job… What really flabbergasted me is that he showed no emotion…’