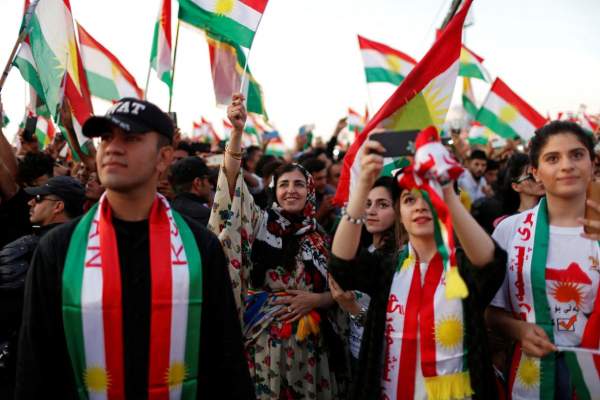 The Kurds live in the borderlands of south-eastern Turkey, northern Iraq, western Iran, north-eastern Syria and western Armenia that speak Kurdish, and most of them are adherents of Sunni Islam, but the Kurds have their own distinct cultural, social and political traditions. According to an estimate, Kurds have a total population of 2.5 crores to 3.5 crores. The largest population resides in Turkey, which is about 50% of the total Kurdish population, followed by Iraq, Iran and Syria. After Tamils, Kurds are the largest racial minority group that does not officially have any state in the world. But both Kurds and Tamils are different cases of study. Tamils have at least their own state in India, but the Kurds do not even have that much in any of these countries. But that doesn't mean that they don't have a spirit of nationalism. Because of this country-less racial nationalism, sometimes they have to face discrimination as well. Although those people are religious, but their political ideology is inclined towards Marxism. That's why even after having the majority of Muslims in their population, they are still discriminated against in other Muslim countries.

What is Kurdistan and its history, and why West is responsible for all of this mess?

"Like Israel-Palestine issue and North Korea- South Korea, there is always a western angle who is responsible for every problem."

The Kurdish crisis is the product of the French and British empires, as both empires drew a map of the Middle East after the fall of the Osmanian Empire, alias Ottoman empire after World War 1 and gave rise to many crises. Earlier, the Kurds lived a peaceful life in the mountainous regions of the Mesopotamian plains, and most of their population was engaged in animal husbandry and farming.

The Kurds lived nomadic lives until the First World War; although the Ottoman Empire broke down after the defeat of Turkey in the First World War, they were divided among many countries. In the 20th century, the Kurds started efforts to build their own Kurdistan. The Sevres treaty came into existence in 1920 after the First World War, under which the Ottoman Empire was divided, and the demand for Kurdistan was raised. But at the end of the war, the Allied countries of the Western world gave up the demand for independent Kurdistan and the Kurdish region was divided among many countries.

Another stance came when Saddam Hussein's Iraqi army was repulsed from Kuwait in 1991 under the leadership of the United States of America; US President George Bush appealed to the Iraqi military and its citizens to oust the dictator from power. But when the Iraqi Kurds rose up against Saddam Hussein, they received very little help from the US. The Kurds had to leave their homes and flee because the Iraqi army massacred thousands of Kurds. When the US attacked Iraq in 2003, the Kurds were ready to contribute once again. When ISIS spread its influence in Iraq, Kurdish fighters also helped to wipe out the militant groups.

In Syria, the YPG in the US-backed Syrian Democratic Forces (SDF) also pushed ISIS out of its Raqqa headquarters. But now, after changing the political equation, American help also got blurred. In 2018, when the Iraqi army fought ISIS and recapture the territory which was acquired by the Kurds. With the withdrawal of the US military, Turkey has started attacking the Kurds in northern Syria.

The Kurds feel betrayed by their most potent ally over America's history. Former US Ambassador to NATO Nicholas Burns told CNN, "The message for our friends in the Middle East is that America is not trustworthy."

The Kurds did not get an autonomous state except Iraq. In Iraq, the Kurds have a regional government called Iraqi Kurdistan. In Iraq, Syria, Turkey and Iran, different organizations are running movements for joint Kurdistan.

Why Turkey attacks them?

Turkish President Recep Tayyip Erdogan has been aggressively vocal against Kurdish nationalism since the beginning. The Turkish president made it clear that his ultimate goal is to eradicate the Kurdistan Workers Party (PKK), an extremist and political organization in Turkey and Iraq that has fought against Turkey for almost three decades.

Turkey has always been unhappy with the presence of Kurds in north-eastern Syria bordering its border. In many areas, there is a crisis of identity in front of the Kurds. Kurdish people are facing discrimination and have to face attacks in these countries. For example, in Turkey, the Kurds are called as "Pahadi Turks". There is a ban on wearing their own traditional costumes, speaking their language and naming their children Kurdish. Kurdish people constitute the largest racial minority community in Turkey, and about 20% of Turkey's population is Kurdish. That's why Turkey hates them because they are different from other Turkish people.

Turkish forces have already entered Kurdish areas and areas under the US-backed Syrian Democratic Forces (SDF) administration, but now Turkey intends to create a buffer zone of 32 kilometres in northern Syria. Currently, this area is under the jurisdiction of Kurds. It has two objectives- to drive away from the Kurds from their border and to settle 2 million Syrian refugees in that area.

Because of this, the gap between other Turks and Kurdish Turks grew deeper. In 2016, Kurdish-backed media outlets were shut down by the Turkish government. About 11,000 teachers were fired, and government-appointed new mayors were in place of the 24 Kurdish mayors of the country. Turkish government all did this because they suspected that these people could have links to PKK. Turkey considers the Syrian Kurdish militia YPG a threat to its sovereignty and integrity.

Another reason was that in 2017, In Iraq, the Kurds have voted on a referendum to create a separate country, Kurdistan. There is news that a large number of Kurds have participated in this referendum. However, the government of Iraq has declared it illegal. On the other hand, the United States and the United Nations have not supported it. Neighbouring countries Turkey and Iran fear that this will inspire Kurds to secede here as well. Both countries are strongly opposing this referendum and are very cautious about the whole event.

Why Kurdistan will remain a dream for Kurdish people?

Middle-east expert Qamar Aga said to BBC, "These organizations are divided into different countries. Their struggle is to make Kurdistan together but there are differences among themselves. It has been more than 100 years since these people separated. Because of this, their own selfishness has arisen." We can understand deeply from his words that somehow they are actually at fault. If they want that land, they will have to accept the differences between the people living there. The country will not stand on just a race or a nationalist idea. The country needs a united population who are willing to live together despite having differences. The dream country of Kurds needs a centralized leadership and a strategized freedom struggle whose only goal is to attain complete freedom. Unless this thing sits in the mind of those people, then even if Kurdistan is formed, it will not last long.