A Gigantic Sinkhole has opened up in Puebla, Mexico 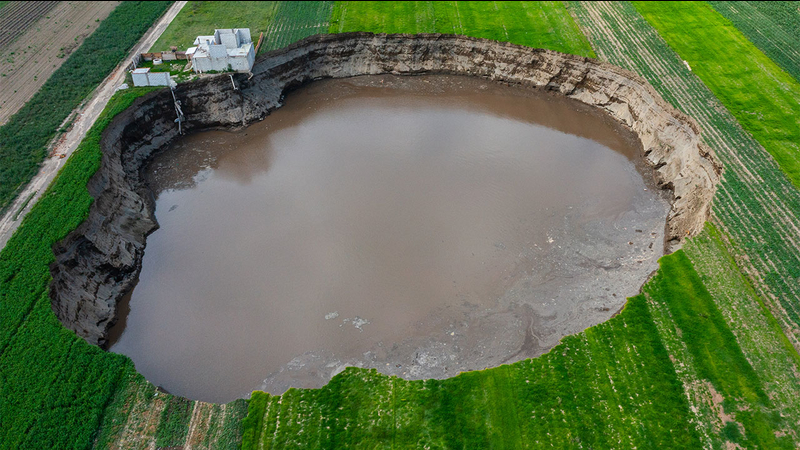 A giant sinkhole of 300 feet in diameter and 60 feet (20 meters) deep has opened up in farmland in central Mexico. It has rapidly expanded and grown larger than a football field since it first appeared in early June 2021. It also began swallowing a nearby house and trapped two dogs in its depths. The sinkhole is situated in the state of Puebla, in Santa Maria Zacatepec, Mexico. The earth has eaten up around 70,000 square feet of the area, according to the authorities. The giant hole measured only 15 feet (five meters) in diameter when it first appeared, then grew rapidly in just a few hours. It's been expanding rapidly since then.

The authorities were informed about the occurrence on the same day. They visited the site and examined the area thoroughly. The state civil engineers and several other agencies even visited the spot and they think that a geological fault may have caused it. The sinkhole might have appeared due to the softening of the field and the extraction of groundwater which softened the subsoil.

According to the United States geological survey, sinkholes open up when the ground can no longer support the land surface above it. But this can happen for several other reasons too, including the erosion of the rock beneath the land surface as groundwater passes through it leaving a void which the surface collapses into.

Authorities have alarmed locals and asked not to go near the sinkhole. Homes near the sinkhole have been evacuated until the problem gets solved. Moreover, the Mexican government has sent in police and soldiers to keep people 2,000 feet (600 meters) away from the edge of the hole. This is not a tourist attraction or a place to visit with your family, the authorities said on June 9, Wednesday. Authorities have been instructed to set up police tape and metal barriers to keep onlookers out, and have also restricted flying drones over it.

Local people living near the area said they heard a loud thunderous sound before the occurrence of the sinkhole. Magdalena, the owner of the nearby house, told the media and reported, At 6 o'clock, we heard thunder. We did not think this was it and then my in-laws realized it. When I got closer, I saw the earth sink and how the water was bubbling and I started panicking. Further, she said they have not been able to return to their house as it is located too close to the sinkhole. We are very sad because this is all we have. We built our house with a lot of effort and sacrifice. It's a very hard time for us. At times we feel sick from so much sadness, said Magdalena.

Few residents believe the sinkhole is the result of excessive groundwater extraction by factories or a water bottling plant in the area. But the bottom of the hole is filled with water that appears to have strong currents. Experts think it was caused by something like an underground river, said a National defence officer. Further, he said, the origin is probably associated with the presence of subterranean water flows. Miguel Barbosa, Mexican Politician representing the Puebla government said, experts are studying both possibilities, and if water extraction is the main reason, he would cancel all the permits.

The government of Puebla responded on June 10, Thursday to the emotional requests from animal lovers to try to rescue the two dogs who are trapped on a ridge on the sheer edge of the sinkhole dropping 15 meters to the water. The loose soil on the edges keeps crumbling into the water at the bottom of the hole. So it would be very dangerous to try to rescue the dogs. But they have been throwing food down to the two puppies who are named Spay and Spike, said officials.

The puppies, which were playing on the farm near the sinkhole, fell in about a few days ago. Pressure has been built on authorities and officials to do something. However, a non-profit animal rescue squad volunteered to attempt to bring the two pups up. The squad proposed sending a rescuer down on a rope and said the dogs might have to be tranquilised so that they could be caught and pulled up.

Authorities and officials from the government, including the national water commission, will now investigate what caused the sinkhole. This process includes soil studies, geological studies and could take up to 30 days.

More than six people died and 16 injured after a gigantic sinkhole swallowed a bus picking up passengers and several pedestrians in northwestern China in January 2020. CCTV footage showed an explosion inside the giant hole right after the pedestrians fell inside. The moment people waiting at a bus stop are forced to flee as the ground underneath the bus starts to cave in. Several people gathered to try to rescue the passengers but are inundated by the sinkhole as it suddenly widens.

Similarly, a massive sinkhole eats up several cars at a hospital in Naples, Italy. The authorities have been forced to evacuate a Covid ward which is near the parking lot. The sinkhole measured 22,000 square feet in width and 66 feet deep. The earth collapses and it can appear anywhere, from deep in the ocean to urban environments. So there are giant and massive several sinkholes around the world which occur now and then.

How Sinkholes are Formed?

Sinkholes often take thousands of years to form and vary hugely in size. They are usually the result of Karst processes. It happens when rain seeps through the soil. The water absorbs carbon dioxide (CO2) and becomes acidic. This dissolves soluble rock such as limestone and chalk creates cavernous underground spaces. Eventually, the ground gives way. The soil or sand over the limestone collapses into a sinkhole when it is no longer supported because of the cavity below. High rainfall burst water mains and drainage causes the occurrence of sinkholes.