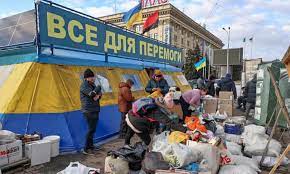 This April 16, a set of Russian military attacks was reported in Kharkiv, the second-largest city in Ukraine, where at least 15 people have been killed and about 31 injured so far.

Also, several media outlets reported that just moments before the attack, shots were heard and then several fires quickly spread to the city center.

Throughout the series of attacks, firefighters were always on the move, driving around the city to put out active fires and rescue victims.  However, there is panic in the streets among all the residents who have fled the area after the ceasefire.

Some residents say they have heard of “six to eight missiles against Kharkiv.”  Also, during the war, open community centers, such as the Kharkiv Community Kitchen, were destroyed to help the population.

For his part, Governor Oleh Synyehubov indicated that at least 15 people were killed and 31 injured this Sunday night, including children involved and attacked.

So far, the war in Ukraine has continued and the negotiations for an end have been fruitless.