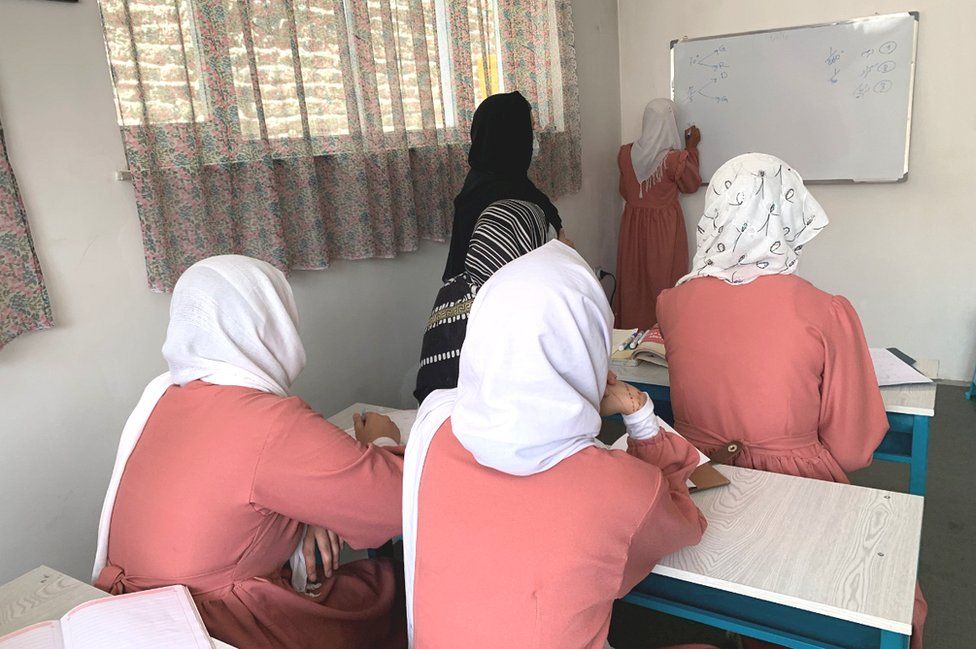 A small secret girls’ school located in a neighborhood far away from the Taliban’s gaze is in open defiance of their restriction on females’ education. The school teaches biology, chemistry, maths, and physics, and classes are two hours a day. The girls’ secondary schools in the bulk of the country remain closed under the Talibani directions. The only teacher there says any risk is worth taking for girls’ education, but she adds that the school does worry about the threats.

The team (BBC) that visited says this school has done a pretty good job of replicating an actual classroom. The teacher further adds that the school is doing this very secretly and she doesn’t care if she gets arrested or beat up because it's worth it. There was some hope of the girls’ school reopening in March, only to get shattered by a new policy of the Taliban.  For many attendees of the school, the trauma is still fresh. A 19-year-old teary pupil said that it makes her very sad to see the schools remain shut since two months. But an optimistic 15-year-old girl added that if we’re brave we can’t be stopped.

The Taliban claims Afghanistan needs a proper Islamic environment for females’ education, despite the schools having gender segregation. The primary schools for girls reopened, but it’s still unclear if the older girls will get to attend. The Taliban have also claimed they will open public schools for girls, but still believe that female education is tough for them to decide. The Taliban prohibited female education during their rule in the 90s owing to security issues.

However, some Taliban members privately expressed their disappointment over not opening the girls’ school. The education ministry appeared quite surprised to see its policies scrapped by the leadership. Some senior Taliban members are supposedly getting their daughters educated in Pakistan and Qatar.

Recently female education has received support from many renowned scholars through fatwas or religious decrees. Sheikh Rahimullah Haqqani is one such scholar who believes it's not against Sharia law.. He further added that female education is necessary because if a girl falls sick in an Islamic environment, it would be ideal for her to be treated by a doctor of the same gender.

Girls’ education is supported even by the bulk of the orthodox Muslims. That being said, the effectiveness of the fatwas supporting female education is still not clear. Currently, The Taliban has a committee to examine this issue. Senior Taliban officials were fine with the girls’ schools reopening, but the opposition to it came from Kandahar, where Mullah Haibatullah is based.

The Taliban have taken a complete U-turn from initially adopting lenient rules to now implementing rules which are really barbaric. There is virtually no public opposition against female education in Afghanistan. Some Taliban officials believe the reopening of the schools could be used by the Islamic state as a tool for recruitment. The West has said that the liberation of women in Afghanistan is the key to claiming billions of frozen foreign reserves.