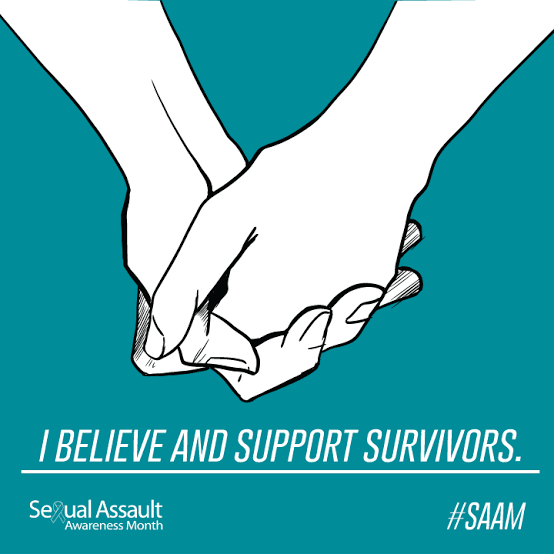 By the end of April let us raise our hats for all the efforts exerted in sexual assaults awareness campaigns or by individuals. This year the women's rights activists have many themes to spread awareness starting from, “building safe online spaces together”, “healing on purpose” “start by believing” and “you are not alone”.

If you see the abbreviation SAAM anywhere, then it is information related to assault awareness. It could be humanitarian movements, specialized posts, blogs, and events to spread awareness about SAAM.

It is rated that nearly 35% of women globally have been through vicious sexual harassment experiences in their lifetime at least once. However, in most countries with databases known on rape (including the U.S.), a limited number of women victims is estimated to be less than  40% seeking help—and fewer than 10% seeking assistance from law enforcement. As a consequence, most rapists bypass punishment. In the U.S instance, it is rated that only 9% of rapists are sued, and only 3% spend time in prison. 97% of rapists walk unrestricted

According to the world population review statistics, here are ten countries with the highest rape rates:

Sexual Abuse can happen anywhere, including home — the involvement of a family member, close friend, or neighbor is not unheard of . Besides women, men and young boys also suffer the repercussions of sexual violations. One out of every 10 rape victims is male.  LGBTQ individuals face even higher risks for rape and sexual assault.

The journey of healing from the PTSD caused by sexual assault is like being reborn. When victims decide to confess it all, and remove this heavy mountain after their chests, from this perspective the annually awareness month SAAM originated, in solidarity call for every survivor, raise your voice, we believe you and you are not alone anymore, after long decades of victims were shamed, stigmatized and lived in shadows, it's the survivors month now, to memorize them that no tolerance against sexual assault anymore.

When someone intentionally harms a minor physically, psychologically, sexually, or by acts of insult, the crime is known as child abuse.

An aggressor can have any connection to prey, and that involves the role of an intimate partner.

In litigations of drug-facilitated sexual assault, survivors often criticize themselves. Be sure that -you are not to be offended and blamed. You are the only one authorized to make choices for your body. Using drugs or alcohol is never an explanation for assault and does not mean that it was your mistake.

In sexual assault incidents, the criminal doesn't choose you because you are guilty or you deserve it, or even you are weak, a lot of powerful celebrity women have been through this barbarian act,  between celebrities raped before they were well-known, media moguls Oprah Winfrey is liste. The talk show announcer was raped by a relative when she was just 9 years old. Winfrey has been a sincere advocate for survivors of abuse and frequently used her show as a platform for fellow survivors to tell their stories.

Let us remember that SAAM shows up from the bravery of some survivors who decided to say no and break the circle.