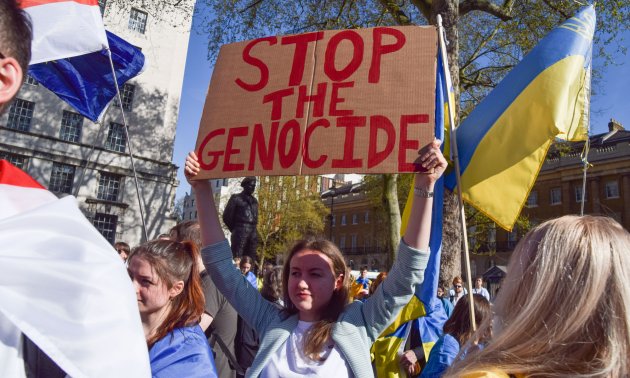 Numerous accusations have been made against the Russian government for permitting and possibly ordering acts of war crimes and genocide to be committed in Ukraine. Notably, Ukrainian President Volodymyr Zelenskyy has made these accusations himself. This begs the question of whether or not Ukrainians are facing a genocide against them?

To answer, let’s look at the definition of the word “genocide.” Provided by the United Nations in Article II of its Convention on the Prevention and Punishment of the Crime of Genocide, it is defined as any of the following:


In this article, we will analyse reports relating to the items above defined by the United Nations in order, one item by one. Reports included will be focusing on civilians of Ukraine only, rather than civilians and Ukrainian armed forces.

Killing Members of the Group

According to the United Nations, 5,110 civilians have been confirmed to be killed by Russian troops in Ukraine. Over 346 of the confirmed casualties are children. The organisation also verified at least 6,752 civilian injuries.  However, the Ukrainian government posits the death toll to be much higher, claiming the total could be as high as over 28,000 civilian lives claimed in the conflict.

Most of the deaths reported by the UN are due to the impact of wide range explosive devices.

Officials from Ukraine and its allies accuse Russia of targeting civilians with bombs and missiles, by targeting known civilian hideouts. Reports of bombing have emerged citing targets like apartment buildings, train stations, schools, hospitals, and a red cross centre. Photo evidence even shows buildings with red cross symbols and Ukrainian and Russian words for “children '' written visibly clear on them were attacked.

In the southern port city of Mariupol, a maternity hospital and a theatre housing civilian refugees were both attacked, with the death tolls in the hundreds.

The mayor of Mariupol claims that over 22,000 civilians were killed in the besieged city alone since the start of the invasion on 24 February 2022.

Video evidence shows dozens of dead bodies lining the side of a street in Mariupol. Several mass graves were also reportedly found, with the body count unconfirmed at this time.

Meanwhile in Bucha, the government claims 1,316 bodies have been found in the city since the Russians withdrew at the beginning of April.

Civilian bodies were found lined up along streets with their hands tied behind their backs, and bullet wounds on their head indicating close range shooting. This is evidence of summary execution.

Russia denies involvement in brutality in Bucha, claiming the Ukrainian government staged the photos and scenes documented in Bucha. However, satellite imagery from March, before Russian troops occupied the city, contradicts this notion. They show no evidence of such crimes having been committed. Satellite imagery points the occurrence of the incident to approximately 19 March, during the Russian occupation of the city.

Other discoveries found in Bucha include and are not limited to: a basement utilised as a torture chamber, bombs boobytrapped into dead corpses, and even a case of a teddy bear boobytrapped with a bomb.

Affecting mental health, Russia is punishing demonstrations of Ukrainian patriotism as though the Ukrainian identity is synonymous with Nazism.

Russian military forces have consistently been thwarting humanitarian evacuation efforts of civilians around the country, and especially in besieged cities like Mariupol.

On 05 May, Russia promised a 3 day cease-fire to allow civilians to evacuate. This was broken within hours of the pledge from Moscow, with evidence of bombings emerging around the Azovstal steel works plant, housing around 200 civilians trapped inside.

To escape armed conflict, over 12 million Ukrainian citizens have fled the country, with President Zelenskyy suggesting many may not wish to or be able to return home due to incurred damages from the war.

Several train stations in Ukraine with travelers seeking to evacuate via train travel were bombed by Russian forces in April, showing a willingness to target fleeting civilians. However, Russia says Ukrainians wishing to seek safety in Russia are welcome (although it is worth noting the journey to Russia is far from a safe one as well).

The Russian government has been issuing fast tracked Russian passports to those living in occupied conflict zones of Eastern Ukraine, with reports suggesting over 720,000 have been issued since 2019.

Internet traffic from some of these regions, such as recently in Kherson, have been redirected to access the internet via Russian infrastructure.

As of 05 May, Russian occupational administrations have been quickly changing names of Ukrainian villages back to Soviet names.

Imposing Measures Intended to Prevent Births Within the Group

As stated above, a maternity hospital was bombed in Mariupol.

Ukraine's ombudswoman for human rights, Lyudamyla Denisiova, told the BBC, “About 25 women and girls aged 14 to 24 were systematically raped during the occupation in the basement of one house in Bucha. Nine of them are pregnant…Russian soldiers told them they would rape them to the point where they wouldn’t want sexual contact with any man, to prevent them from having Ukrainian children.” While this message is difficult to confirm whether or not soldiers directly gave their victims this message, it is worth including.

Forcibly Transferring Children of the Group to Another Group

Denisiova says Ukrainian children whose parents were killed by Russian troops have been forcibly deported to Russia, and put on fast track for adoption in Russia.

According to the US Department of State, over 260,000 children have been forcibly deported to Russia so far, although the actual number of children taken to Russia is unknown.

For Russia to be definitively committing genocide against the people of Ukraine, any one of the above reports would have to be proven to be true. Therefore, there is overwhelming evidence to suggest that the people of Ukraine are being faced with an active genocide. Proving the individuals responsible for these actions is a more difficult challenge. Since some of the above reports must be sanctioned by the Russian government to have occurred, the President of Russia, Vladimir Putin, would be responsible for these crimes against Ukraine, should a formal investigation be completed proving the government's involvement. Such a formal investigation by the United Nations must be conducted and completed in order for accountability to be achieved.