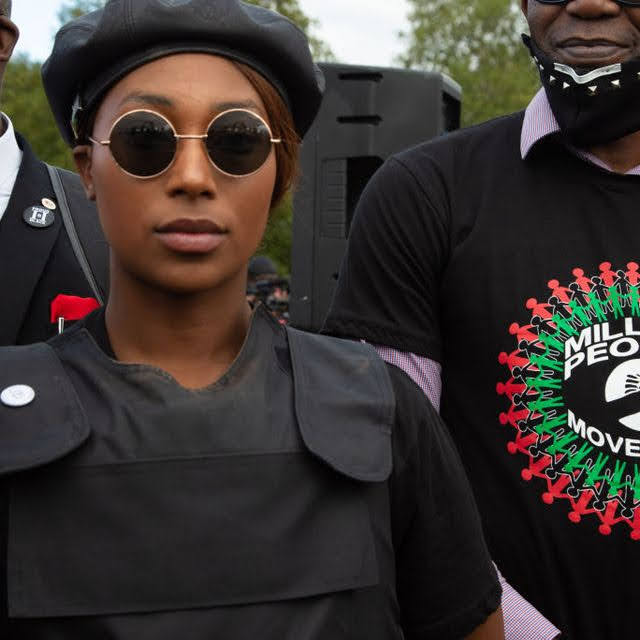 A British Black Lives Matter activist is fighting for her life after being shot in the head during the wee hours of Sunday morning. Sasha Johnson, a 27-year-old Black Lives Matter activist, is in critical condition after the incident, which comes amid “numerous death threats,” according to a statement from the political party, the Taking The Initiative Party which she is affiliated with.

Police are looking for information after Sasha Johnson was found with life-threatening injuries in London at 3 am on Sunday morning.

"It is with great sadness that we inform you that our own Sasha Johnson has been brutally attacked and sustained a gunshot wound to her head," the Taking the Initiative Party said in a statement. "She is currently in intensive care and in a critical condition."

The Metropolitan Police have not confirmed that Sasha Johnson is the victim of the shooting, but released a statement on the incident on Sunday looking for more information, saying they were called to reports of a shooting in the Southwark, London at 03 am on Sunday morning where they found that a 27-year-old woman had been shot.

“It is believed that the shooting occurred at a house where a party was taking place and that a number of people may have been in the area," a statement from the Metropolitan Police read. 'While the investigation is still going on, there is nothing to suggest that the woman who was shot was the subject of a targeted attack or that she had received any credible threats against her prior to this incident.'

Detectives from the Met's Specialist Crime Command (Trident) are conducting an investigation and looking to speak with anyone who was at the party in the Consort Road area of London. They are "pursuing a number of priority lines of enquiry" - but no arrests have been made as of yet.

"A dedicated team of detectives is working tirelessly to identify the person or persons responsible for this shooting," said Detective Chief Inspector Jim Tele. He added that "they need the public's help," and requested people to come forward if they witnessed or had heard any information related to the incident.

Tele added that while he recognized the incident "will have shocked those in the local community and further afield" he called on the public to "avoid speculating as to the motive or the circumstances behind it."

Imarn Ayton said Ms Johnson is believed to have been at a party at the time of the incident, and that a "rival gang" might have "heard about someone being in that party that they didn't feel quite comfortable with or trusted, and so they resorted to driving past and shooting into the garden".

London’s Metropolitan Police Service, however, said that at present “there is nothing to suggest” the shooting in south London was targeted and linked to her activism.

"One of those shots obviously hit Sasha Johnson," they said, but that she was likely not "the intended victim".

Detective Chief Inspector Jimi Tele said: "This was a shocking incident that has left a young mother of 3 with very serious injuries. Our thoughts are with her family who is being provided with support at this terribly difficult time.”

Mayor of London Sadiq Khan said his "thoughts and prayers" were with Ms Johnson and her family, and requested anyone with information to come forward.

Labour lawmaker David Lammy described the shooting as “gut-wrenching,” while Claudia Webbe, also a Labour MP, said, “all women should be safe on our streets.”

Claudia Webbe, a Member of Parliament for Leicester East, took to Twitter to express her "love and solidarity" to Johnson's family and friends following the incident.

"When I think of the brutal shooting of Sasha Johnson it reminds me that the culture of gun violence is all-consuming affecting whole communities & neighbourhoods. The bullet does not discriminate in its effect. But too many women become collateral damage in this 'culture of fear,'" Webbe said in a separate tweet.

The official Twitter account of Black Lives Matter U.K. said it was shocked by the shooting of “a young mother and fearless political campaigner,” adding she was a prominent figure who had been at the forefront of marches last year as many more took to social media to offer their good wishes, using the hashtag #prayforsashajohnson.

Johnson had helped organize a number of protests across Britain last summer and was recorded speaking to crowds in the streets while wearing a stab-proof vest and camouflage print trousers.

Britain’s Taking the Initiative Party announced during the weekend that “our own Sasha Johnson has sustained a gunshot wound to her head.” Describing Johnson as a “strong, powerful voice,” the group said she was known for “actively fighting for black people and the injustices that surround the black community.”

The party, which was founded last year and seeks to represent Black people and those from a working-class background, said Johnson had received several death threats before the attack. London’s Metropolitan Police Service, however, said that at present “there is nothing to suggest” the shooting in south London was targeted and linked to her activism.

She also helped organize the Million People March, which took place in London in August last year to protest systemic racism on British soil — despite police warnings against mass gatherings during the coronavirus outbreak.

“As a people, we’re not going to stop until we have equal rights and justice,” Johnson said at the time, adding that she hoped the movement would “empower the community to strive for better.”

"Our message is- listen to us, hear our words, we want sustainable and tangible change.

"We don't just want tokenistic promises, we don't want it to come from a hegemonic standpoint. We want it to be for the people."

Speaking to the media, Johnson told the MailOnline that she was calling for a “racial offenders register” that would see those guilty of “microaggressions” banned from living in multicultural communities and prevented from working in certain industries.

In March, Johnson posted a video on an Instagram account with her name, showing followers that her car window had been smashed and dented.

“Just warning you guys that people are attacking activists that are speaking out,” she said. “My car has been smashed up. This is what happens as a Black woman when you come to the surface and you start to speak out.”

Last August, Ms Johnson was one of the organisers of the first-ever Million People March to protest against systemic racism in the UK. During the demonstration, hundreds of people took to the streets of west London.

The Taking the Initiative Party is a political party that was registered with the Electoral Commission nearly four years ago and fielded its first candidates in May's local elections.

Ms Johnson, who got a first in social care at Oxford University, has "an immense passion for implementing change and justice and has been actively supporting the eradication of injustices in society by attending and leading protests", according to her page on the TTIP website.

"Although not everyone may agree with her methods, she is not afraid to stand up for what she believes in."

Johnson rose to prominence last year during the Black Lives Matter protests, as a leader of the TTIP, which has been called "Britain's first Black-led political party."

She is a mother of three, and also works to deliver food and groceries to families in need, according to the party, which called her "a strong, powerful voice for our people and our community" in its Sunday statement.

Black Lives Matter UK will host a vigil for Johnson on Monday afternoon outside Kings' College Hospital in south London.

The organization said it is holding the event to "show support for her recovery and take a stand against senseless violence." It asked people to "please share and show up to support if you can."