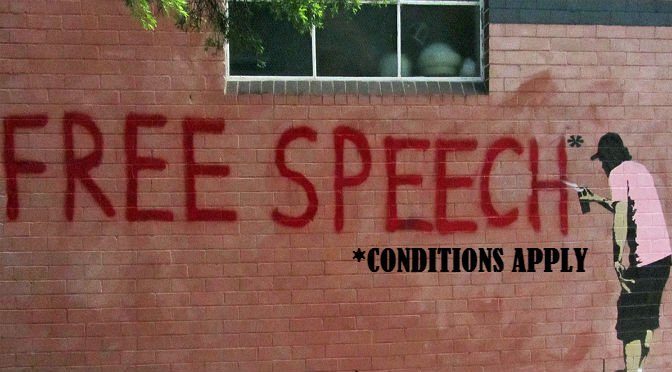 Free speech is the essence of true democracy, but it has its curtailment to avoid exploitation of the right. The limitations are usually explicitly described and enforced by law, practices like defamation, copyrights, inciting violence are some of them. “What is freedom of expression, without the freedom to offend, it ceases to exist.”- said Salman Rushdie. It is generally argued that free speech, with an absolute right, would hurt somebody due to the diversity among people. It is often said that freedom of one should stop where freedom of another begins. In western democracies like France, freedom of speech and expression is a right of utmost value. It is nearly an absolute right with only a few limitations, put for maintaining peace and law and order.

Blasphemy is the term used to describe a deliberate action of insult that indicates disrespect or contempt towards a deity or something sacred. Blasphemy laws are, as the term suggests, the laws that prohibit blasphemy. Blasphemy laws are strenuous to formulate because of the lack of clarity among the religious groups.

The French Republic values do not allow for any such law. The French version of secularism also clearly specifies that the state remains separate from any religious authorities and any personal religious beliefs. The French administrative decisions are not, in any way, influenced by various religious beliefs. The French democracy also roars freedom of speech in itself. This was not a problem when France had a homogenous society with common religion and similar ethnicities, but today France has huge diversity. France today has a 5.4 million Muslim population, the biggest in Europe, and to offend them would very much affect the nation.

The critics of the blasphemy laws argue that freedom of speech and freedom of religion can go hand-in-hand, but restricting free speech would limit the ability to critique religion, which sometimes may also be necessary. But there is a thin line between critique and blaspheme.

Charlie Hebdo, a French magazine, published cartoons of Prophet Mohammed, a Muslim religious figure, which offended the Muslim population all over the world. In Islam, it is offensive to joke about or present cartoons of the Prophet. These cartoons were republished, which were considered more offensive than the initial publication of 2015. Samuel Paty, a teacher in a French school, showed the cartoons in his class and was beheaded days after that. French President Macron also defended the ‘right to blaspheme’ after this incident, which led to a worldwide French boycott. Many Muslim world countries like Kuwait, Jordan, Qatar boycotted French products by removing them from the shelves of all their supermarkets.

It is a debate to decide whether the cartoons are Islamophobic and offensive or a tool of free speech. Prophet Mohammed is a well-respected figure among Muslims, who often perceive cartoons and other material critical of him as an attack on their Muslim identity. But the French authorities push on it being free speech. President Macron in his speech, on the memorial of the teacher, affirmed to “not give up cartoons.”

Mila, a French teenager, last year started commenting about Islam. In January 2020 she wrote on her social media- “the Koran is filled with nothing but hate, Islam is a shitty religion.” This triggered Muslims around the world. She received around 100 thousand hateful messages and death threats, according to her lawyer. On 3rd June 2021, the mass trial of 13 people accused of cyberbullying and hateful messages to Mila began. “I cannot believe that these 13 people who have all been through our education system do not know that criticising religions is legal and has nothing to do with racism,” her lawyer Richard Malka said.

President Emmanuel Macron also came to her defence saying “the law is clear. We have the right to blaspheme, to criticize and to caricature religions.”

In this, both sides are to be blamed. As erroneous are the death threats as is intentionally triggering your fellow citizens. Blasphemy can very easily turn into hate speech. It, in itself, can hurt people of various religious beliefs and create a situation of disorder. The French courts are trying the aggressive reactors but ignoring what triggered these reactions. As it is said rights come along with duties and responsibilities and it is the duty of every French citizen to not offend their fellow citizens. Rights are to be used judiciously, and so should the right to blaspheme be used wisely.

The French authorities have been seen defending free speech and the right to blaspheme at various instances. This has also increased France’s conflict with the Muslim world. Free speech can be protected but as mentioned earlier it should be curtailed to maintain peace and harmony among a nation. France now being a diverse country, of which they are proud, should take care of the needs and wants of their population. They should also keep up their spirit of fraternity by creating citizens who would use their rights judiciously and not to hurt or offend anybody. On the contrary, the restrictions on free speech would lead to people discussing these behind closed doors. Free speech may lead to conflicts but also gives an opportunity to understand the other culture, what they believe and what they think about the issue.

Religious issues are overly sensitive and should be tackled carefully. Free speech and the ‘right to blaspheme’ should be used to critique the superstitions and irrationality of a religion rather than hurting the sentiments of the people believing in it.