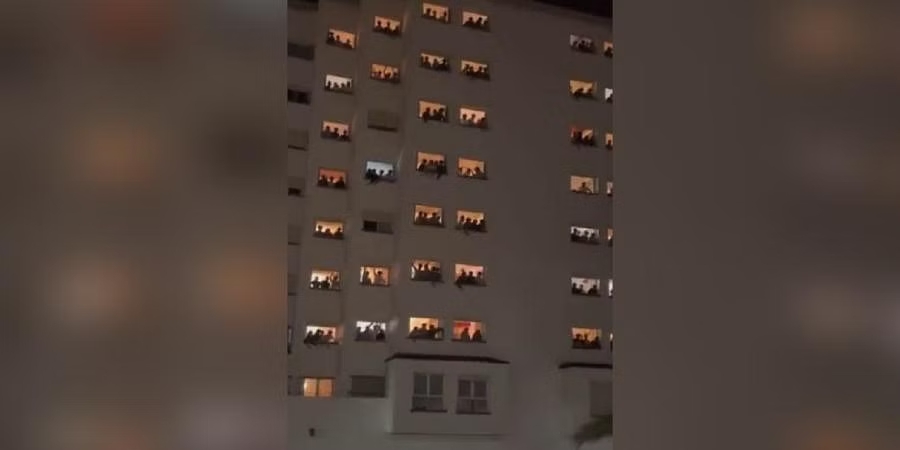 On Thursday, a video went viral on Twitter, showing a huge number of men from Elías Ahuja College in Madrid shouting disrespectful and sexist insults to neighboring girls from Santa Monica College. The incident occurred on the night of Sunday, October 2. Since then, Spanish authorities have expressed their disapproval towards the students’ conduct.

The viral video was published by Rita Maestre, the spokesperson of the progressive political party Más Madrid. It shows around 40 windows opening from a block of flats, with more than 100 male students chanting and shouting abusive and obscene insults in Spanish towards the female residents of Santa Monica. Wh*res! Come out of your burrows like rabbits! You’re f*cking nymphomaniacs. I promise you’ll all f*ck in the capea!” is what could be heard from the windows of the Elías Ahuja residence, followed by cheers of exclamation and support.

The actions of these students were condemned by Maestre, who tweeted “Then they will wonder why we are afraid of the streets.” In addition, Elías Ahuja college released a public statement calling the male students’ behavior unacceptable and incomprehensible in society. The Complutense University of Madrid, which is partnered with the college, stated on Instagram that action would be taken against the students involved, including the expulsion of the main instigator. Moreover, the university will ensure that the students attend mandatory gender equality lessons and offer public apologies. Other punishments detailed in the university’s Instagram post include community service.

Pedro Sanchéz, Spain’s Prime Minister, heavily condemned and criticized the episode,  stating that: “We need to give a united and common message of rejection of these machista behaviors which are unexplainable, unjustifiable, and absolutely repugnant,” He further said that “We don’t give any excuse for these behaviors, they don’t reflect the majority of Spanish society,” and that sexual education courses should be reinforced to teach youngsters about abuse and consent.

Finally, the Spanish news outlet El Público reported that incidents of this nature are not uncommon among students at Elías Ahuja. This sort of activity is a tradition at the school. At the beginning of each new school year, older students teach new students this chant, which is then performed at the start of classes. El Público has also alleged that the students from Elías Ahuja have been filmed, in the past, singing songs while using Nazi salutes. Due to the alleged ‘traditional’ nature of the chants, the university’s administration hasn't taken any action against it in the past years - but after the events on Sunday, the administration declared that they will ensure no more incidents like this occur again.

“Misogyny”: Representing the Asymmetrical Power Relations between Men and Women