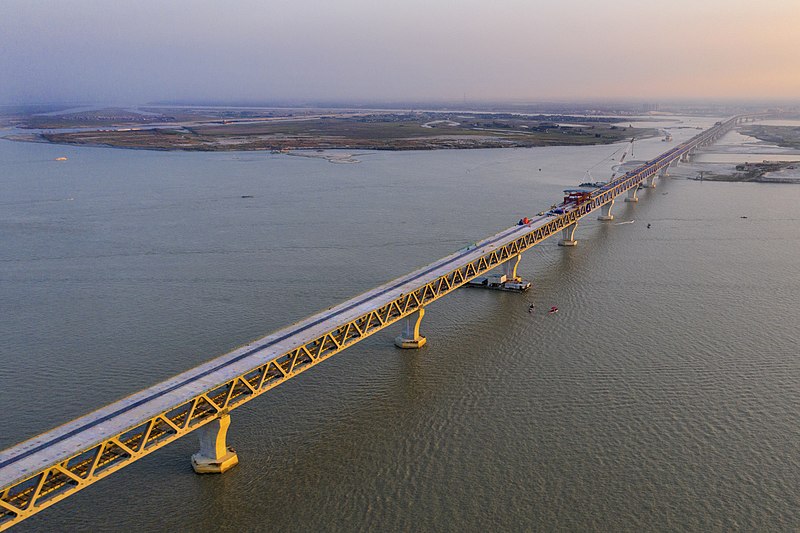 It is no secret the People’s Republic of China turned towards a more assertive foreign policy in recent years. Chinese President Xi Jinping’s “Major Country Diplomacy” has been essentially driven by the core idea China is to assume a stronger leadership role that is in line with its newfound power in the international community. Among the initiatives put forward by the Chinese government to achieve this goal, the Belt and Road Initiative (BRI) have recently been in the spotlight due to the controversy sparked by the imminent inauguration of the Padma Multipurpose Bridge. The latter, set to open on June 25, is to connect the south-western regions of Bangladesh to the northeast, leading to significant socioeconomic improvements.

The BRI was announced by China in 2013 and was set to incorporate most former Asian historical trade routes, such as the Silk Road, as well as modern ones, like the Maritime Silk Road through the Indo-Pacific Sea. Since its announcement, almost 150 countries have agreed to join the project, which is primarily funded by China itself through agencies like the Asian Investment Infrastructure Bank (AIIB) and the Silk Road Fund. The project is expected to be completed by 2049.

The People’s Republic of Bangladesh has been a signatory country of the BRI since 2019. Due to its geographical position, it has been considered one of the most important contributors to the project’s success. In fact, one of the six corridors which make up the core of the BRI will pass through the country, connecting Kunming to Kolkata via Myanmar and Bangladesh. A considerable amount of development funding has been set aside for Bangladesh, which will soon begin implementing more BRI projects.

Projects for the Padma Bridge were first put forward in the late ‘90s, in pursuit of a faster route connecting Dhaka to the southwest of the country. The construction was initially to be funded by the World Bank along with other donors, but they were forced to back out due to the accusation of corruption of many associates with the plan. At that point, the government of Bangladesh decided to self-fund the project. China swiftly intervened to offer some assistance, which was accepted by the country, and construction began.

The controversy was sparked by the response of the Bangladeshi Ministry of Foreign Affairs to China’s allegations that the bridge was part of the BRI. Dhaka refuted this position on account that Chinese participation consisted of minor subcontractors, while the project itself was entirely funded by the nation of Bangladesh. Unlike neighboring countries like Sri Lanka, Bangladesh has been reluctant to undertake all projects proposed under the BRI, thus leading to frequent clashes with China. As a country that is heavily affected by climate change, Bangladesh insists on the importance of sustainability of national development projects, a threshold that is not always met by China. It will be the responsibility of the countries to shape peaceful reciprocal relations in respect of the needs of both sides.

The return of the Sino-Taiwan conflict