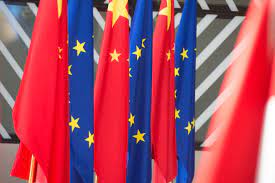 Today's efforts of EU aim to persuade China to refuse to help Moscow deal with Western sanctions during a virtual summit in which Beijing seeks to renew its economic ties with Europe, where war is raging in Ukraine.

The President of the Euriopean Commission, Ursula von der Leyen and the President of the European Council, Charles Michel, speaking on behalf of the 27 Member States earlier this morning, spoke for at least two hours with the Chinese Prime Minister, Li Keqiang. Li Keqiang said, ''On Ukraine, China opposes both hot and cold wars, divisions between coalitions, and refuses to take sides'', written on Twitter by Wang Lutong China's Ministry of Foreign Affairs for Europe in China. Wang also added that both Chinese and European officials ''agreed to work together to maintain world peace, stability and prosperity, plus, conduct a dialogue on energy and food security. The main purpose of the summit of the European Union is to urge China not to over-support Russia, European officers stated.

More specifically, a European officer stated on Tuesday that ''it is really important for the Union to know whether China is using its influence to bring about a ceasefire to have humanitarian corridors or if it helps Moscow bypass the sanctions by boosting hydrocarbon markets or by providing financial assistance.''