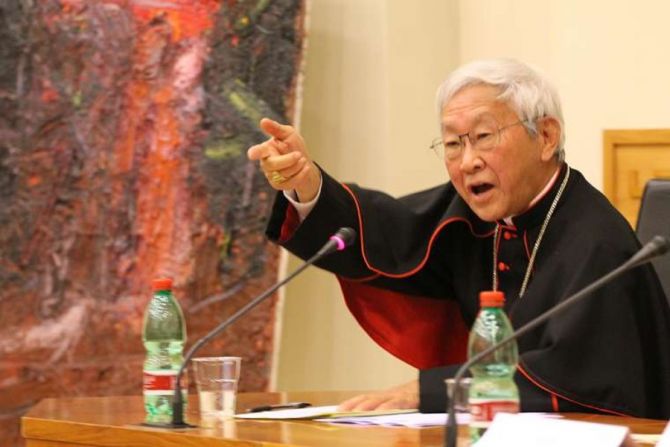 On Wednesday, 12 May, Hong Kong police arrested four people on charges of a foreign conspiracy under the national security law. It includes Cardinal Joseph Zeng, the 90 years old archbishop emeritus of the city.

Zeng has been outspoken on the Chinese Communist Party’s human rights abuses and a strong advocate for the 2019 democratic movement in Hong Kong. The Beijing authorities have records of cracking down on religious groups in China, including catholic studies and churches. When the Vatican strikes a deal with China over religious cooperation, Zeng publicly criticizes its decisions, mainly on the Catholic church’s ignorance of abuses against Muslims in Xinjiang. Later, he travelled to the Vatican and requested a meeting with the Pope, attempting to persuade the leadership to review the deteriorating situation in Hong Kong. Though, the request never went through.

The foreign collusion charges were made regarding the 612 Humanitarian Relief Fund, a charity aiding legal fees for arrested protesters and protest-related injuries. The number “612” refers to 12 June 2019, when the first significant clash between protesters and the police broke out around the city’s legislature building.

The fund stopped operating last year after national security police announced an investigation on the fund. Yet, the public suspected the arrest after the pro-Beijing newspaper denounced Zeng and the 612 funds. Similar patterns in the past show figures tend to be persecuted after being criticized by the same newspaper.

Besides Zeng, the other three arrested figures include Margaret Ng, a former legislative member, Dennis Ho, a famous local singer, and Hui Po-Keung, an academic. All four were released on bail later that night. However, since the courts are still packed with related charges, some have already been imprisoned for years, suggesting the trial would only take place in the next few years.

The arrest came three days after the election for the Chief Executive, the highest governing role in Hong Kong. Like elections in China, there was only one candidate, and voting was also restricted to pro-Beijing officials and businesses. John Lee, the former police chief, won nearly all the votes. Albeit he claims to be a catholic, he puts patriotism first; protecting Chinese interests becomes his prime objective. His “appointment” could suggest tougher prosecution in Hong Kong; his iron-fist approach to crushing democratic protests brutally and violently would only mean a darker future for citizens desiring freedom.

Arrests based on national security have terrorized the city since the enforcement of the national security law on 1 July 2020, 23 years after the city was returned to China from British colonial rule. Since its enactment, hundreds of prominent democratic figures and politicians, journalists, students, and regular citizens, have been charged with foreign collaboration, overthrowing the Beijing authority, to even terrorism. Only a few managed to flee the city in time and live in exile.

The Vatican has responded, expressing its concern that the leadership will continue to monitor the situation closely. Other countries have also expressed their concern over the arrest. Government officials in the UK and US have condemned the persecution. The continuing deterioration of democracy and freedom in China and Hong Kong only demonstrates its commitment to challenging the Western order. Whether the Vatican would appease Beijing or defend its fellow archbishop will offer insights into China’s foreign influence.