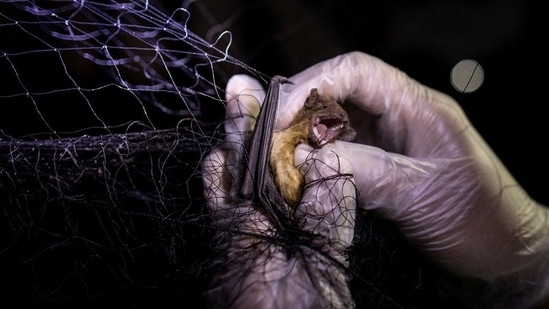 Chinese researchers have discovered a batch of new coronaviruses in bats, sparking increased demand to investigate the origins of COVID-19.A

Accordingto reports, one of the recently discovered viruses in bats may be the second-closest (genetically) to the COVID-19 virus.

As per the researchers, their discoveries in southwestern China show precisely how many coronaviruses are present in bats and just how many have the potential to spread to humans.

In a report published by the Chinese researchers, from the Shandong University States, 24 novel coronavirus genomes, were collected from different species of bats, including four coronaviruses that are similar to SARS-CoV-2.

The samples for research were gathered, between May 2019 and November 2020 from small, forest-dwelling bats.

According to the researchers, they examined urine and feces swabs from the bats' mouths.

The Chinese researchers revealed that one of the viruses was said to be genetically identical to the SARS-CoV-2 virus that is causing the current pandemic. They said, "It would be the closest strain to SARS-CoV-2 except for genetic differences on the spike protein, the knob-like structure that the virus uses when attaching to cells."

In the report published in the journal Cell, the Chinese researchers wrote, "Together with the SARS-CoV-2 related virus collected from Thailand in June 2020, these results demonstrate that viruses closely related to SARS-CoV-2 continue to circulate in bat populations, and in some regions might occur at a relatively high frequency."

The new coronaviruses are discovered in bats. And they come at a time when there is a rising demand for an independent, timely, transparent, and evidence-based process, for the next phase of the WHO-convened COVID-19 origins study.

COVID-19's origins have recently become the subject of increased demand for more research.

It was first discovered, in Wuhan, China, toward the end of December 2019. It was rapidly recognized, as a new beta coronavirus that was related to SARS-CoV and other bat-borne SARS-like coronaviruses.

The virus swept throughout China and several other countries, prompting the World Health Organization's Director-General to declare a Public Health Emergency of International Concern on 2020-30-01.

It's still unclear how the virus made its way from animal to human populations.

The outbreak originated epidemiologically in the Wuhan market, and several environmental samples, from the market's live animal section, were later discovered to be positive for SARS-CoV-212 but, current data suggests that it may not have emerged from there.

Reports claim that on 2019-12-01, an elderly and infirm man experienced symptoms and was diagnosed with SARS-CoV-2 infection for the first time. The questionable fact is none of his family members was infected, and the source of his virus is still unknown.

Thus, it appears that the virus was amplified in the market, but the market may not have been the outbreak's primary source of infection.

According to a phyllo-epidemiological study, the virus was circulating but unidentified in November 2019, it was imported to the seafood market from elsewhere, where it escalated.

After SARS-CoV and MERS-CoV, the virus is the third zoonotic coronavirus discovered, although it turned out to be, the only one with pandemic potential.

Even after more than 1.5 years since the first instance, of infection was reported, in China, the origin of the coronavirus remains a mystery.

Currently, scientists and governments are demanding more research and further investigations to find out whether the virus emerged naturally or leaked from the Wuhan Institute of Virology.