Concentration camps and forced labour: An Account of China's repression of the Uighurs 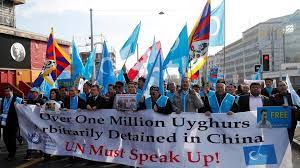 Beijing (AFP) – A leak of thousands of images and official documents from China's Xinjiang region has cast new light on the brutal techniques used to enforce widespread incarceration in the region.

'Training camps' in Xinjiang are one of China's finest secrets. It has long been claimed that over a million Uighur and other ethnic/religious minorities are incarcerated in these facilities and subjected to heinous human rights violations. China has refuted such claims, insisting that these are voluntary vocational training facilities intended to "reform and retrain" locals for a more meaningful economic role.

Following a massive cache of data hacked from police systems in the region and posted on various news sites, China's defence appears to blow up in its face once more. An unnamed source disclosed the records, called the Xinjiang Police Files, to scholar Adrian Zenz, a renowned authority on internal Chinese government materials. Zenz is employed by the Victims of Communism Memorial Foundation, a non-profit organization based in the United States.

The disclosure occurred while UN human rights Chief Michelle Bachelet was on a long-awaited and divisive visit to Xinjiang.

What's in the leaked documents?

According to the BBC, the collection of leaked internal information includes over 5,000 police images of Uighurs taken between January and July 2018, with at least 2,800 confirmed detainees. There are also classified remarks by senior authorities, internal police manuals, incarceration details for over 20,000 Uighurs, and images from extremely sensitive areas among the documents.

The files, which have been confirmed by numerous news organizations, also give a glimpse inside life in detention centres. Officers appear to be restraining hooded and shackled detainees with batons while other guards in camouflage stand by with weapons, according to photos. The released documents suggest that interns in detention camps were blindfolded, handcuffed, and shackled while being transferred between facilities or even to the hospital. Photos show that juveniles are also detained in Xinjiang camps, with the youngest being 15 and the oldest being 73.

In recent years, the Chinese Communist Party has incarcerated between 1 million and 3 million Uighurs in "re-education camps," forcing them to participate in psychological brainwashing programs such as studying communist propaganda and offering appreciation to Chinese President Xi Jinping. As part of the indoctrination process, Chinese officials are said to have employed waterboarding and other forms of torture, including sexual abuse.

Using satellite images and other evidence, researchers from the Australian Strategic Policy Institute have identified over 380 re-education camps, detention centres, and prisons in Xinjiang, with at least 61 having been extended or renovated in the last year.

'Sexual Abuse while being interrogated!'

Those who were able to escape the camps have told terrifying stories of physical and sexual assault. Some Uighur women said they were raped by Chinese authorities while being interrogated, as well as watching other captives being raped. Tursunay Ziyawudun, a 42-year-old Uighur woman who survived a detention camp in Kunes County, northern Xinjiang, told Voice of America that she was beaten, sexually tortured, and gang-raped during interrogations.

The Chinese foreign ministry, on the other hand, stated that these assertions lacked any basis in truth.

Uighurs are exploited for cheap labour within and outside the camps and forced to make garments and other things for sale both at home and abroad. In July, the New York Times reported that certain Chinese face masks sold in the United States and other nations were made in factories that used Uighur labour.

Another study discovered evidence that Chinese officials pushed Uighur women to mass sterilization, compelling them to use birth control or have abortions and incarcerating them if they refused. Some have claimed that this endeavour to suppress the Uighur population qualifies as genocide under the United Nations definition.

The Chinese government, on the other hand, says that the camps are simply vocational and training centres where inmates are taught employment skills.

The leaked documents reveal how China's officials viewed the minority population of Xinjiang as a security concern, with one minister warning that more than two million individuals in southern Xinjiang alone had been "severely influenced by the infiltration of radical religious ideology." A 2017 internal speech by a former Communist Party secretary in Xinjiang purportedly directs guards to shoot to kill anyone who tries to flee and asks for officials in the province to "take tight control over religious believers," according to the files.

17-year-old Zeytunigul Ablehet, who was jailed for listening to an illegal speech, and 16-year-old Bilal Qasim, who was supposedly convicted for being related to other detainees, are among those whose images have been leaked. Others were jailed only for practicing Islam or traveling to a Muslim-majority country. According to the BBC, the documents indicate multiple cases of people being sentenced retroactively for "crimes" committed decades ago, with one guy sentenced to ten years in 2017 for "studying Islamic text" for a few days in 2010. Approximately 16,000 mosques in Xinjiang have been destroyed or damaged as a result of government initiatives adopted largely after 2017.

Why is China attacking the Uighur Muslim community in Xinjiang?

Xinjiang is an autonomous province in northwest China that borders Kazakhstan, Kyrgyzstan, and Mongolia and is home to around 11 million Uighurs and other Muslim minorities. Since 1949, when the People's Republic of China was created, it has been under Chinese rule.

The majority of Uighurs adopt a moderate version of Sunni Islam and speak their language, which is an Asian Turkic language close to Uzbek. East Turkestan is a term used by some activists, notably those seeking independence from China.

Xinjiang, which was once part of the old Silk Road trade route, is rich in oil and natural resources. The region drew more Han Chinese as it grew with the rest of China, a migration supported by the Chinese government.

Ethnic tensions arose as a result of this population shift, particularly in some of the larger cities. In 2009, riots erupted in Urumqi, the capital of Xinjiang, after Uighurs opposed the government's and Han majority's treatment of them. During the rioting, 200 people were killed and hundreds were injured. The Chinese government blamed the protests on violent separatist organizations, a method it plans to apply against Uighurs and other religious and ethnic minorities around the country.

The Chinese government claims that it is fighting radicalism and separatist movements by placing restrictions on Uighurs and Muslim minorities. In recent years, Uighur separatists have carried out several violent attacks and some Uighurs have joined foreign combatants such as ISIS.

Xinjiang is also a significant logistics hub for Beijing's Belt and Road Initiative, a trillion-dollar infrastructure project that follows the old Silk Road and aims to strengthen China's economic and political clout worldwide. The growing relevance of Xinjiang to China's worldwide ambitions is one of the main reasons Beijing is asserting control in the province.

The freshly revealed documents show that Beijing's policies in Xinjiang have the support of the highest levels of the Chinese government. President Xi Jinping gave direct orders to enhance the capacity of detention facilities, according to a 2018 internal address by the public security minister. Another paper mentions Xi and calls for a tougher crackdown in the region.

The controversial Xinjiang visit of the UN human rights chief Michelle Bachelet, the UN High Commissioner for Human Rights, visited China in late May on a six-day journey that included stops in Xinjiang. Bachelet has been chastised by rights groups and Uighurs overseas, who claim she was duped into a slickly organized Communist Party tour, which included a conversation with President Xi Jinping that was afterward depicted in state media as reciprocal support of China's high standards on human rights.

Outside of the camps, the Chinese government continues to harass Uighurs. In February 2020, a 137-page spreadsheet from Karakax County in Xinjiang was leaked, revealing how officials tracked Uighur families. The database contains 300 Uighur family names, as well as the identities of individuals detained in concentration camps and those under surveillance by officials. Some of the people being followed were as young as 16 years old.

According to the New York Times, authorities were interested in things like getting a passport (whether or not they travelled), praying regularly, and even growing a beard. Family members were kept under surveillance if they attended religious ceremonies such as funerals or weddings. If Uighurs broke China's birth limitations, they were also transferred to camps.

The Xinjiang Police Files are the second largest Xinjiang data leak. More than 400 pages of internal documents dubbed "Xinjiang" were leaked online in 2019 and confirmed by Zenz. The US expressed shock at the fresh files on Tuesday, saying they demonstrated that abuse had most likely been condoned at the highest levels in Beijing.