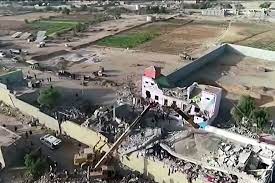 A Saudi led airstrike hit a prison in Yemen killing over 70 and injuring more than 200 people, on friday. The attacked prison was a temporary detention facility in the northern city of Sa’ada, which mostly detained illegal immigrants from African nations. The deadly event is recorded to be the biggest humanitarian crisis in the recent progression of the Saudi – Yemen war that had started in 2014. Several hospitals in the city were filled up with critically injured victims while the rescue operations were still being carried on at the site. The Houthi lead news channels aired video footage of the terrible situation in Sa’ada  whichthe showed rescue operators digging out for more victims amidst the rubble the strike left.

The attacks led by Saudi Arabia on the Houthi provinces of Yemen also reportedly hit the telecommunication facilities. The country witnessed an entire internet blackout from the early hours of Friday. The communication systems were  also highly affected. Reports also came from further south where three young children had been killed in the airstrikes. Save The Children agency said that the kids  had playing been football in an open field during the airstrike.

The attacks happened on Frida, the day on which United Nations was about to hold a meeting so as to analyze the Abu Dabi airport attacks in UAE  which had  taken place earlier on Monday. The United Nations General Secretary Antonio Gutteress commented that “the escalation needs to stop” in a news conference that followed.

What led to the air strike?

The war in the southern part of the middle east took a new turn on 17th January, on Monday, when the Abu Dabi airport in UAE witnessed an unprecedented drone and missile attack. The attack killed 3 people including Indian nationals. UAE is the biggest ally of Saudi Arabia in the war. The terrorist attack was  thefirst  of its kind  thatin took place in the highly secured Abu Dabi airport. The Iran ailed Houthi rebels of Yemen had taken responsibility  for it. This event led to a rigorous airstrike by the Saudi coalition over the capital city of Sa’ana and the hostile state remained throughout this week.

US President Joe Biden, in the beginning of his term in the office had made an announcement to end this warfare in the middle east. USA being a top supplier of military equipments to Saudi Arabia was supposed to cut down their allowances for this purpose.

Why is there a war in Yemen ?

Yemen is the southernmost country in the middle east that is witnessing one of the biggest humanitarian crises in the world. Rebellions began in Northern provinces of the country as a result of poor civilian situations. The Houthi led militants were backed by Iran and had toppled the Saudi led government in the capital city of Sa’ana in 2015. Since then the war raged in the country between the two groups dividing the country into the Houthi powers in the north and the  Saudi coalition in the south. The progression of the situation has led to severe poverty and famine in the country with millions of people fleeing the war prone land. The grave situation is still continuing  even after  seven years.

Who will be the UK's next prime minister?