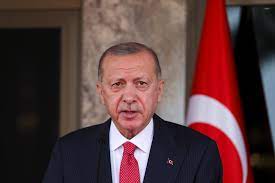 In these last days, a new hope for an end to the conflict between Russia and Ukraine arose quite unexpectedly.

Recep Tayyip Erdoğan, the Turkish president, who has always been in a position because of his authoritarian behavior and the choice of his authoritarian government, offered to hold a clarification meeting between the Kremlin, Kyiv, and the United Nations.  The purpose of these meetings is, of course, to end hostilities between Ukraine and Russia and to reunite Russia's position in the United Nations.  The Turkish president intended himself as a mediator to increase the chances of reaching a meeting point between the three parts of the table.

One wonders why a bloodthirsty dictator like Erdogan would dedicate himself to helping the United Nations in such a complex situation.

The Turkish president's political views have always been closer to those of Putin and Xi Jinping than to Europe, the United States, or the United Nations.

Erdogan shared with Putin a highly authoritarian view of the regime’s behavior, and he also agreed with Putin on the transition from an American monopoly of world political power to a multifaceted geopolitical situation, where he hopes to become one of the major powers.

Moreover, Erdogan shares and propagates an anti-Western perspective, which is confirmed by strong anti-Western propaganda, which spreads throughout the Turkish population.

Geo politicians were not surprised by such ties between Russia and Turkey when Turkey did not vote in favor of economic sanctions against Russia after the outbreak of the conflict in Ukraine.  Surprisingly, but still understandable, Erdogan formally condemned Putin’s actions, but experts saw these words as the word of the situation.

Furthermore, since Turkey is a country where Russian oligarchs are seeking refuge, many geopolitics have speculated on Turkish military intervention in favor of Russia.

So why is Erdogan doing this?

In recent years, Erdogan has often been in the spotlight for his authoritarian dealings with political opponents, the Kurdish minority, or the LGBT + community. Moreover, his way of dealing with the military storytelling effort in 2016 pushed him to the brink of Europe and the West. These situations have done a lot of damage to his image, leading to Turkey’s growing isolation and a massive mediation attack against the president. This situation persuaded Erdogan to block Turkish web services several times in order to thwart Western-mediated attacks against his leadership, which could lead to a revolt among the Turkish people.

Erdogan sought to maintain a neutral role during the impending events in Ukraine, preserving his powers at the United Nations and his alliance with the Russian Federation. Now, the purpose of his mediation may be to play his game to clean his name in the eyes of the West and the media, as well as his population, to establish himself as a champion of peace, and to raise Turkey and establish itself as Turkey’s last base.

The question arose spontaneously. Can we trust Erdogan?

There is no answer to that question.  We know for sure that, from a geopolitical point of view, Erdogan has placed himself in an important position, and that the West can only hold on to the hope that his mediation between the West and Russia will succeed, even if it means giving a lot of mediation and political power to an authoritarian leader whose main purpose is to make his name clear in the eyes of the world.